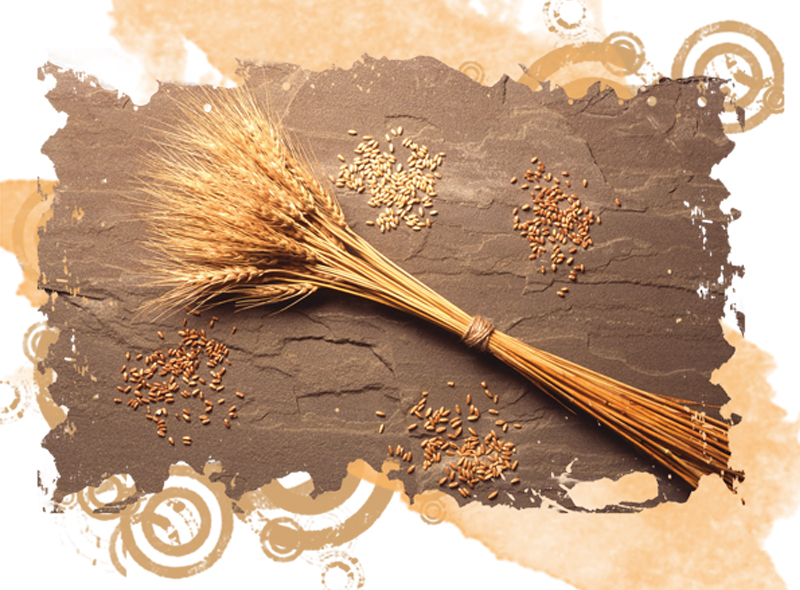 Wheat first fell to the earth in Harran, first settled societies and oldest cities were established in Anatolia. This is why the story of wheat is also the story of Turkey.

The humanity’s familiarity with wheat dates back to early days of his adventure on the earth. According to some religious myths, the fruit forbidden to ancestor of humans, Adam was wheat. Since the first sin humanity committed was to reach for the forbidden fruit, wheat is the apparent reason behind the exile to the earth where so many wars, and so much suffering took olaplace. Again according to religious myths, Adam was taught to cultivate wheat before he was exiled to the earth, which would result in thousands of years of tragedy for him and his lineage. With this knowledge, plow met with the earth for the first time in Harran and here, wheat kernels brought from Heaven turned into wheat ears. At the beginning, wheat with hundreds of cameltooth sized kernels in each ear, got fewer and smaller in the hands of Adam’s evil-doing children. Sometimes it just gave two crops to one, sometimes ten or a hundred… This is why for thousands of years, abundance of wheat has meant wealth and satiety, as scarcity of it meant famine and chaos.

Wheat was again on one side of the conflict between Adam’s children Cain and Abel. Cain offered a handful of wheat ears to God, as Abel offered a sheep from his flock. The rage of Cain, whose offering was rejected, resulted in him committing the first murder in the history.

Again according to holy writings, Prophet Josef who interpreted Pharaoh’s dream stored Egypt’s produce throughout seven years of abundance, and this way people survived seven years of famine that followed. In ‘Bible’, humanity’s search for maturity is exemplified through the saying “unless a grain of wheat falls into the earth, it does not bear much fruit”. In prayers in ‘Torah’, the wish for “plenty of wheat undulating” is uttered. In ‘Koran’, those who spent their wealth in God’s way are resembled to a single grain that grows seven separate ears which has a hundred grains in each. This is why some ‘Koran’ researchers claimed growing seven separate ears from a single kernel is possible. Again ‘Koran’ referred to crops in explaining worldly possessions, and resembled perished nations to crushed crops. All these narratives demonstrate that wheat was a basic motif in all divine religions.

In written sources, wheat is a plant that adapted to the climate and soil of the geography it grew in. It would for a long time after the harvest and when mixed with water, it would increase in amount and satisfy one’s hunger. It could be consumed with a variety of foods, and its straws were used both as forage and fuel. It was easy to carry wheat around because of its small grains. Growing it would not require close inspection or extra irrigation. It was of constant commercial value. This is why its existence was the synonym for life.

Humanity adopted a sedentary life to wait for the harvest season of the planted wheat. Sedentary life required developing housing and defense methods. Humanity first built huts, then established villages and cities where he settled, and initiated trade by exchanging the excess produce with goods he did not possess. People started communicating with other communities which they initially feared and avoided. Due to the necessity of keeping an account of what is produced and exchanged, they drew lines on stone, clay tablets and pieces of leather. These lines transformed, and started to represent sounds. Humanity stepped out of the darkness of history with the invention of writing.

So wheat was not only the name of the ban which commenced humanity’s adventure on the earth, but at the same time the prime dynamic in humanity’s transition to civilization. Archeological sources confirm that wheat was first cultivated in Anatolia, Azerbaijan, Western Iran and Southern Caucasus. There is physical archeological evidence that wheat was cultivated in Tell Aswad settlements located at the south of Jericho and Damascus near River Sharia. It is not known if this is the region Adam first landed following his banishment from heaven, but the civilization period for humanity began here. Yes, both historical and religious records confirm that wheat, staple food of old civilizations, was cultivated here first.

In written records dating back to Mesopotamian civilizations, it is seen that wheat was a major commercial product. Wheat motif is frequently used in ‘Epic of Gilgamesh’ and in depictions. Main product sent from Mesopotamia to Arabic deserts and central Asia, and to Gulf region by sea was wheat. In Old Egyptians and Phoenicians, wheat was a taxed product and had an officially fixed price. There are also records on wheat being a convenience good for military forces and religious authorities.

Another historical record suggests that Hittites developed agriculture in Anatolia, and cleared vast lands for cultivation which are still farmed today. It took various forms in the hands of Hittites and was transformed into cracked wheat, millet drink and semolina. It is interesting that the etymological root of the word “kalbur” (sieve) used in modern Turkish goes back to Hittite languages. Reliefs which still stand, depict Hittite God Tarhuna with a wheat ear in one hand, and a bunch of grapes in the other.

Even thousands of years later, wheat is associated with satiety, wealth and life for the people of Anatolia. Just like the sacred meaning corn has for Central American natives, rice for the Chinese, and potato for Southern Americans… This is why religious rituals command regarding wheat as the holiest offering from God and therefore showing respect to it. It is customary in Turkey to kiss bread and place it over the head. This is why bread and salt are respected: an expression of loyalty because humanity is provided with most basic needs. Then there is the respect towards coffee as a reverence to friendship, fellowship and companionship. On the other hand wheat is the ornament of nature. It is out as the snow melts, and grows with April showers, undulating like a green sea with the wind. It becomes welfare when it comes into ear, it is mid-summer when it turns yellow. Harvest gives a pleasant feeling of weariness felt after a victory. The saying “Wheat and lamb, rest is a game” transformed into a proverb by Turkish farmers, reveals that wheat is a basic means of living for those engaged in agriculture. In Anatolia, some parts of Balkans and Iran, custom of pouring wheat grains over a bride’s head upon entering the nuptial chambers, is a ceremony that expresses the wish for the bride to bring abundance and wealth to the house.

Humanity, searching for methods so that the harvested wheat would for a longer time, be used in a larger variety of dishes, evolve into different delicacies, and become a more refined commercial good, then came up with the idea of frying wheat which had been water-soaked for consumption before. Then they discovered that when crushed between two flat stones wheat turns into a magical dust. This process is thought to be implemented for the first time in Ancient Egypt. Dusted wheat extract acquired is thought to be prepared as a thick soup at first. Flour mixed with water in leather bottles would thicken with the help of hot stones. This cooking method probably also led to the invention of Boza (millet drink) and beer. Today in some African countries which are former European colonies,flour
is still prepared as a thick soup.

It is agreed that dough was first cooked on hot stones and then later on sheet metals developed by forging iron. Tandoori (Floor furnace) still exists as the basic method of bread-making utilized in Middle East and Asia Minor. Bread-making can be as modern and as simple however tandoori still remains irreplaceable in Asia Minor. Oven is an improved tandoori.

In later ages, wheat started being used not only in bread-making but also in a great variety of products. It was boiled and dried so it would be durable for a longer period of time, and material acquired was transformed into bulgur, cracked wheat, fine bulgur and semolina. Magical hands of women which had been processing, producing and storing these products for thousands of years, made them into numberless dishes, pastries, desserts, salty dishes, soups and appetizers with the skill of a sculptor giving form to rocks with her art.