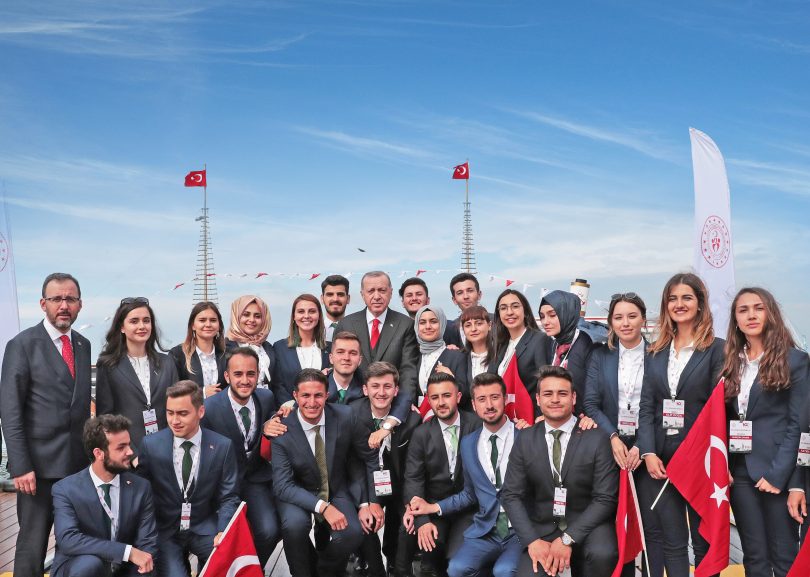 THE TURKISH STATE CELEBRATES ITS FOUNDING LEADER’S HISTORIC DAY OF STRUGGLE OF 100 YEARS AGO THROUGH EVENTS TITLED “CENTENARY”.

“They will go just as they came”.

Mustafa Kemal Atatürk, the founder of modern Turkey, was an intellectual soldier who could not bear Istanbul’s being kept under “surveillance and control”, in other words, being occupied by foreign forces.

After the Armistice of Mudros was signed (30 October 1918), enemy fleets entered Istanbul’s waters and disembarked soldiers on 13 November 1918. Having arrived in Istanbul around the same date, Mustafa Kemanl Paşa was crossing over to Sirkeci on board of the Kartal steamboat at 15:00 in the afternoon and history was witnessing a new moment.

Still a major-general in those days, Mustafa Kemal was tired as he got off the train in Haydarpaşa; he was to be met ceremoniously by a squad of soldiers at the train station. His close friend Dr. Rasim Ferid Talay Bey and Cevat Abbas, one of his aides, were among those to meet him, and they all witnessed a historic view: A fleet of 55 British, French, Italian and Greek ships were steaming past Haydarpaşa to where they would lay anchor.

On his way to the Galata quay on board the Enterprise (Kartal) steamboat belonging to the French occupation forces, which had waited for him at the Haydarpaşa Train Station’s quay, Mustafa Kemal Paşa spoke in a tone audible to his aide Cevat Abbas Bey on that hazy day, and said, “Don’t worry”. He would then continue: “They will go just as they came”.

Immediately after the occupation of İzmir, before sailing from Istanbul to Samsun on 16 May 1919, Mustafa Kemal Paşa had an interview with Sultan Vahdettin, and was appointed Inspector to the 9th Army. According to what was written by journalist Falih Rıfkı Atay, who was very close to Atatürk, Sultan Vahdettin sat almost knee-to-knee with Mustafa Kemal Paşa and asked him to save the state:

“Mustafa Kemal is at Yıldız Palace in Vahdettin’s chambers, sitting virtually knee-to-knee with the Sultan. The guns of the foreign dreadnoughts are trained at Yıldız. Vahdettin says, “Paşa, paşa, you have served our country well. These have all been put down in history. What you will do now, however, will be more important than all. Paşa, you can save the state if you want to”.

Sailing from Istanbul to Samsun with 18 staff officer colleagues in his entourage, Mustafa Kemal led Turkey’s national struggle on 19 May 1919, that is, 100 years ago, after which he demonstrated great heroism in the founding of a modern and strong country.

Mustafa Kemal Paşa, an officer friend of whom was to warn him, before he left Istanbul, that he had heard from a monitored and sunk at the Black Sea coast”, would “choose to sink and drown rather than staying in Istanbul and being arrested”, and would go on the journey. Mustafa Kemal Paşa relates those days, saying:

“I told the captain to stay close to the coast to avoid any attack by enemy states, and that he should run the ship aground at the closest point if he perceived any immediate danger. Thankfully, that was not necessary, and a nation awoke”.

Mustafa Kemal Paşa took his leave of the Grand Vizier at a cool and unpleasant dinner at the Grand Vizier’s Mansion in Teşvikiye, which was also attended by Chief of Staff Cevat Paşa. However, the important discussion of that night was to take place between Mustafa Kemal and Cevat Paşa after they left the grand vizier’s

mansion. In his work Tek Adam (The One Man), Şevket Süreyya Aydemir relates what occurred between Cevat Paşa and Mustafa Kemal Paşa as follows:

“The two Paşas are walking side by side at that time of the night. They are both preoccupied. They are abstracted. Then Cevat Paşa raises his head. He looks carefully at his friend for a while, and then asks:

– Are you thinking of doing something, Kemal?

– We will certainly succeed!”..

After that night Mustafa Kemal Paşa and his friends definitely “did something”, and lit Turkey’s torch of independence to rid the country of occupation, as well as demonstrating heroism in founding a modern state.

A 100 years have passed since 1919. No doubt Turkey is a much stronger state compared to a 100 years ago. It draws its strength from its accumulation from the past, and renews itself by feding on contemporary norms. President Recep Tayyip Erdoğan, inspired by this accumulation, describes Turkey’s active power, saying “we are renewing our resolution for a stronger future”.

CENTENARY CELEBRATIONS FOR THE 19 MAY COMMEMORATION ATATÜRK, YOUTH AND SPORTS DAY

The Turkish State celebrates its founding leader’s historic day of struggle of 100 years ago through events titled “Centenary”. In fact, in the speech he delivered at the Centenary Celebrations of the 19 May Commemorating Atatürk, Youth and Sports Day organised at Samsun Tütün İskelesi, President Recep Tayyip Erdoğan said, “Today we are initiating a series of centenary events that will start today, on 19 May in Samsun, and end on 29 October 2023, the centenary of the founding of our Republic”.

Reminding that the centenary of the Çanakkale Victory was celebrated magnificently, Erdoğan emphasised that such anniversaries offer countries and communities an occasion both for a reckoning, and for reviewing the targets for the future.

Indicating that, starting with the landing in Samsun on 19 May 1919, the 22 June Amasya Circular, the 23 July Erzurum Congress and the 4 September Sivas Congress will be celebrated joyfully this year, Erdoğan said, “We will do our reckoning and refresh our targets together. Of course, the 23 April of next year is important as the centenary of not only the National Struggle, but also of the decision to conduct this process through the national will. In the process of our reckoning regarding the Grand National Assembly, we will discuss certain decisions made under this roof in depth. We will also dwell on the causes of the hitches our country experienced with respect to democracy and the economy for a long time.

The Turkish People Has a History of Thousands of Years President Erdoğan said that the Turkish people has a history of thousands of years, and that only the 16 Turkish states that are represented in the Presidential Seal have a past of 2 thousand 200 years, and indicated that the Turkish states ruled over a wide geography from Europe to Russia, Central Asia, Mongolia, China, India, Pakistan, Afghanistan, Iran, the Middle East, and North Africa. Emphasising that when he set foot in Samsun a century ago, Gazi Mustafa Kemal was not any other person, but one of the most brilliant officers of the Ottoman army, President Erdoğan said, “in our tradition the name and administrators of the state may change, but the understanding that lends it an eternal life remains constant. What renders the state eternal is the nation itself.

“Occasions of Shame Such as

Colonialism and Genocide Have No

Place in This Nation’s Record”

Pointing out that the only memory remaining from our ancestors that ruled over a wide geography stretching from central Europe to the depths of Africa are those of love, respect and justice, President Erdoğan said, “Thankfully neither colonialism, nor genocide, oppression or any other shame has no place in this nation’s record. Although our last two centuries witnessed many pain and great losses, we did not make the slightest compromise in this stance. During the Ottoman withdrawal from the Balkans, history’s greatest genocide was practiced on our nation. Indicating that a series of centenary events that would last until 29 October 2023, the centenary of the founding of the Republic, was being initiated starting on 19 May in Samsun, President Erdoğan said, “This year we will start by landing in Samsun on 19 May, which will be followed by celebrations of the Amasya Circular on 22 June, the Erzurum Congress on 23 July, and the Sivas Congress on 4 September, we will do our reckoning, and refresh our targets all together”.