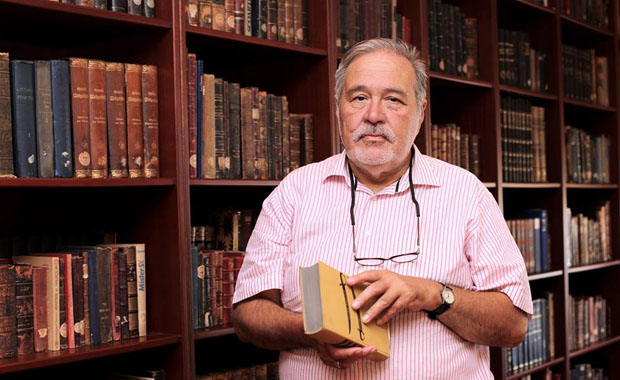 We held a pleasant interview with Prof. Dr. İlber Ortaylı on his Seyahatname

You are a modern traveller as well as a historian. Your first journey was to Syria, how was it? You say, “The Ottoman ruled over those lands with such a colourful history, for four centuries” especially for Damascus; could you tell us about this colourful history?

I was born abroad. So my first journey was to Austria and Italy. But the most inspiring journey I can remember, was the one I made to Syria, Lebanon and Palestine; I travelled entirely by bus. This journey deeply influenced me. Especially every minute I spent in Syria… Of course, back then Aleppo was also very beautiful. That Aleppo is gone, and it will never come back. I can say the same for Damascus. I have to admit that the historical fabric of Syrian cities had been preserved well before that last brutality. For instance, when I visited the region again in the 90s, both Aleppo and Damascus had grown by 10 times. But the historical centres were unchanged, and preserved. Instead of building new settlements in the centre, they built them around the city centre.

For example, Aleppo’s historical texture does not solely consist of buildings. Both its nature and people are protected as well. You could come across someone wearing a French-style veil next to a person with a fez. At the same time, Syria has a rich cuisine. It does not change even if you go to a casual restaurant in the market, or a luxurious restaurant. What I liked most was, the chef would invariably welcome and say goodbye with his team when a group came in. This is an old Turkish custom as well. Aleppo has Turkish characteristics, from call to prayer to its bazaars. I cannot explain this colourful history at the moment but I must stress that this is the most problematic region in the Middle East with multiple ethnic identities. Nevertheless, almost no adverse events occurred in the four centuries after Sultan Selim I.

It is impossible to not be influenced by Samarkand. As I said before, the architecture in the Soviet Union is not very pleasant. At the same time, they did not brutally damage the historical artefacts. This is a very important detail, because the city still stands thanks to this.

One of your remote destinations was Singapore. How did it feel to come across Abdulhamid II’s books in this region?

It is impressive to see Abdulhamid II’s books in such a remote place. You witness that there is an Islamic world which Sultan Abdulhamid influenced and was influenced at the same time. It is indeed a global Islam with Istanbul in its centre… Extending from Morocco to Singapore, from Far East to South Africa. If we look at the circumstances of period; our military technology fell behind in the 19th century, and the case was the same for the navy. Sultan could not improve the navy because there were no means. Unlike Sultan Abdulaziz, there was no money and means. However, Sultan Abdulhamid II had another ability. He was very good in foreign politics and diplomacy, and managed these well. Again, the sultans that followed had no interest in handicrafts. They did not even make an attempt. But Sultan Abdulhamid was a good carpenter too.

In an interview you say, “Go to Bosnia if you have lost hope for the world.” Based on this, can you share your opinions on Bosnia?

It is very clear. Bosnia is a country suffering from the fanaticism, ignorance and loot that arises from ignorance, that today we all see and complain in the Islamic world. On the surface everyone is idealistic, everyone is very content with their faith. But no one is ready to put that faith to test. When you go to Bosnia, you see that people have Muslim identity, and at the same time they try hard to cope with the modern world and its instruments. You will see a well-informed mass that lives and worships in that way. So much so that in Bosnia, they do not use loud speakers to call for prayer and you hear naked human voice. Visit Bosnia for your weakened faith or worries. I would like to mention Kazan here. The capital city Kazan is spectacular. A civilization centre for both the East and the West.

The most striking expression in your article about Jordan is “A Turkish intellectual, without regard to their profession, should know Jordan well.” Can you elaborate on that expression?

When I say Jordan, I mean Palestine. These two cannot be separated, you have to know both. Because that is a place where humanity unites, where humanity took roots. Jordan; because it has improved itself and established a connection with the spiritual realm. It was the case when I was young, until the Six-Day War. You must know Jordan to love it. You also have to consider Jerusalem as part of it because it is an occupied region. There is, in fact, Jordan.

As a person who often travels, which Western cities and civilizations have made an impression on you?

I am a member of Enstitü’s advisory council. I have a semi-official position so I try to do my best. There are institute directors who were born and raised abroad and also speak Turkish and know the region well. The state does a great job recruiting these people. They work very efficiently and it is my duty to support their efforts. Everyone should visit, and give lectures. I visit Lebanon, Germany, Amman. I visit Vienna often which is an intriguing place.

Yunus Emre Enstitüsü has centres in many countries; is there a particular country / city where you would like a YEE centre?

I would like YEE to have Enstitü centres in every city of Iran. For example, a dentist in Isfahan is trying to learn Turkish by himself. Compared to other Eastern countries, Iran has a different texture. We need to open centres also in Uzbekistan, Arab countries, Russia and Central Europe.