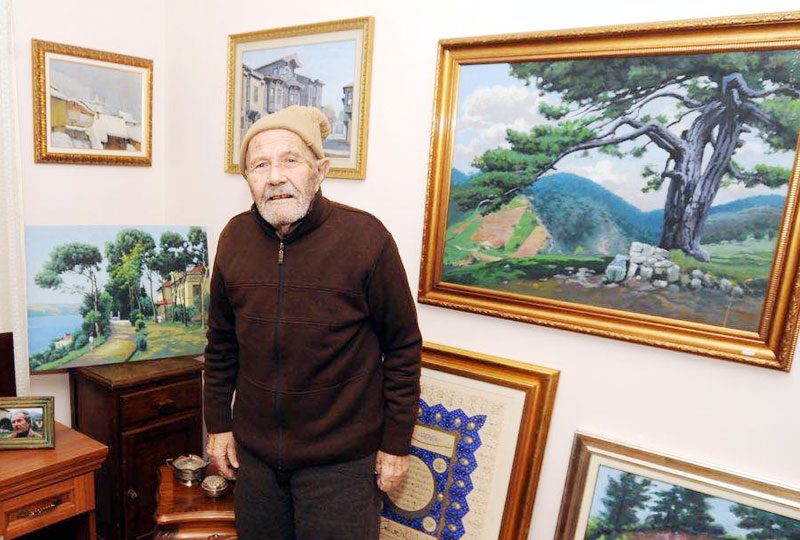 Süheyl Ünver, one of the greatest Turkish scholars and artists of the last century, embarks on a journey in the autumn of 1941 to tour Anatolian cities. Süheyl Ünver visits Kütahya and upon deciding to study the history of this ancient city, he stays in Kütahya for some time.

During his time here, he stops by at Çakır’s Coffee house one day and sees a fine oil painting on the wall. He admires this painting and requests to meet with the artist. They call the artist. A little later, a shy young man with his hands tied in front of him, comes along.

This young man is Ahmet Yakupoğlu. He is the son of the Gendarme Corporal Hacı Halil Ağa and Şefika Hanım. He was born in Kütahya’s Saray District in 1920. He has been painting all his life. On cabinet doors, on house walls, on papers… He leaves his works everywhere. The teachers at Kütahya High School who realized his raw talent, sent him to the academy in Istanbul, but the doors of his academy were closed to Ahmet.

That day, the encounter at Çakır’s Coffee house changes Ahmet’s life. A philanthropist and an art dealer, Professor in Ordinary Dr. Süheyl Ünver takes him under his protection. They come to Istanbul together. With the support and encouragement of Süheyl Ünver, Ahmet Yakupoğlu graduates from Istanbul Fine Arts Academy in 1945 participating in Feyhaman Duran’s Workshop.

Süheyl Ünver also gives Yakupoğlu miniature and illumination training during his years in Istanbul. He blows “reed flute” with master Halil Dikmen. He performs with Reed Flutist Nurullah Kılınç and Süleyman Erguner. Istanbul is an ocean. Ahmet Yakupoğlu dives deeper and deeper into this ocean. He weds modern art with traditional perception. As he enters the world of colours with his brush, he refreshes his soul with his musical knowledge.

Everything goes well in Istanbul. The art circles admire and respect him, and his paintings revive the busy life around Bosphorus. However, he has a duty of loyalty to Kütahya. He returns to his home town and paints every corner of this lovely city. He reflects on the canvas the spirit of Kütahya with its mosques, fountains, streets, historical houses, mansions and madrasahs. He does not stop there, and makes efforts to transform the idle Vacidiye Madrasah into a museum.

THE CITY OF REED FLUTISTS

Then he aspires to paint Anatolian cities. Konya, Bursa, İznik, Antalya, Amasya… He immerses himself in history and paints cities. His paintings are calm. They offer tranquillity to viewers. He paints noiseless, non-motorized cities where there is no struggle. Houses are peaceful, and the trees are delicate in his paintings.

Ahmet Yakupoğlu who is an artist, also practices reed flute with young people in Kütahya. So much so that thanks to his students, Kütahya is called “The City of Reed Flutists”. His house was a shelter for art and a school, so to speak.

Meanwhile, he wishes to build a mosque in Kütahya. A mosque built entirely with tiles… So the Tiled Mosque which he personally worked on, emerges. All the interior and exterior decorations of this mosque are made by him.

Ahmet Yakupoğlu is one of the figures who made Kütahya a city. He makes ceaseless efforts for restoration of historical monuments, to green the city, to open museums, and to preserve its history and culture.

He is an art figure, a man of the heart, and an urban dervish.

Ahmet Yakupoğlu, who passed away on October 2, 2016, is a polymath of our age.