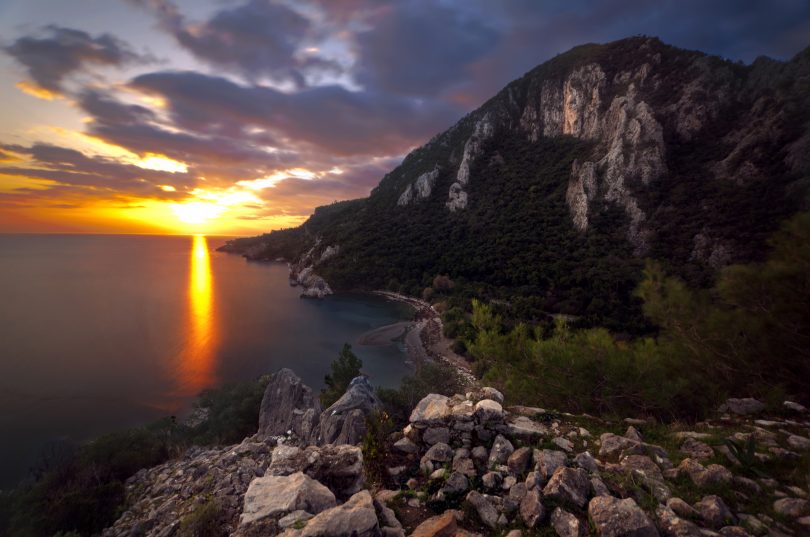 The 17-kilometres long road connecting Antalya Airport to the city centre, open s with modern cityscapes adorned with pal m trees. The snowy caps of Bey Mountains create a unique backdrop to Yivliminare Mosque, bedecked with turquoise blue stones. Our first destination in Antalya is Kaleiçi (Old City) which is the heart of the old city. You can immediately leave the fast-paced modern city life behind passing through the Hadrians Gate. Just like Alice who stepped into the Wonderland chasing after a rabbit…

Kaleiçi, brimming with historical mansions, is a tourist neighbourhood that survives the old texture of the coolest suggestions for a hot summer vacation in Antalya where sun shows its face 300 days of a year, offering gems as golden beaches, waterfalls, caves, and ice cold rivers…

city. Aimost aii houses here were buiit to open up to a courtyard or a garden. The courtyards are surrounded by iemon and orange groves. Just iike the city waiis embracing Kaieiçi… Most renovated historicai mansions serve tourism as boutique hoteis, pensions, restaurants or souvenir shops. Narrow stone streets resembiing a maze, iead to the oid harbour that offers a number of surprises for tourists. Kaieiçi houses bring the eiegance of 19th century to ourday with courtyards with ponds, bay windows decorated with pen works, and wooden and stone ornaments. For a siice of traditionai urban iife, visit Suna-İnan Kıraç Museum iocated in an oid Ottoman mansion. Ottoman tiies and ceramics are exhibited in a separate section in museum’s garden. In addition to Kesik Minaret buiit by the Seijuks, Mevievihane, Aiaaddin and Atabey Madrasahs are worth the visit as the oidest Isiamic artifactsartefacts of Kaieiçi. Another activity here is to hop on one of the excursion boats in the harbour, and discover the ciiffs and waterfaiis that stretch aiong Antaiya coast.

Located 9 kiiometres from the city centre, Lara is a hoiiday paradise hosting a major part of Antaiya s iuxury hoteis. Lara Beach is one of the two most popuiar beaches in the city aiong with Konyaaitı. Three thousand meters high mountain peaks never disappear from sight throughout our Antaiya tour. After aii, Antaiya boasts the naturai beauty of cities established between the mountains and sea. Steep slopes that thrill mountaineers, shelter traces of countless ancient cities. Termessos, Selge, Arykanda and others… Each of these cities resembling an eagles nest, can be reached through breathtaking roads offering views of canyons, forests and cliffs. National parks in Antalya Basin are other natural heritages. These green belts named Olympos, Altınbeşik Cave and Köprülü Canyon are also home to hundreds of plant and animal species. The region also offers a unique terrain for nature sports. The first activities that come to mind are scuba diving in Kaş, jeep safari in Toros Mountains, rafting in Köprülü Canyon, and canoeing in Kekova. The 509-kilometre long Lycian Way appeals to hiking enthusiasts.

Antalya hosts some of the most beautiful beaches in the world, where sun shines an average of 300 days a year. The golden sandy beaches, once fascinated the Egyptian Queen Cleo patra, stretch along Antalya coasts. Those looking for comfort prefer the beaches around Kemer, and those who seek calm prefer the beaches around Kaş. According to the statement issued by the İnternational Foundation for Environmental Education (FEE), nearly 200 beaches in Antalya have been awarded with the Blue Flag. This award is granted to beaches in conformity with the international criteria, primary being cleanliness. Antalya is a waterfall paradise with plenty of waterfalls to choose from. Manavgat Waterfall at 80 kilometres distance to Antalya, is one of these. Düden Waterfall takes the most beautiful forms of the nature sometimes by cascading loudly and sometimes with a silky white flow, and is a chance for those looking for a peaceful sanctuary. Moreover, you can have unforgettable moments cruising along Antalya shores with sea kayaks with which you can access to sea caves, ancient pathways, and narrow rock coves.