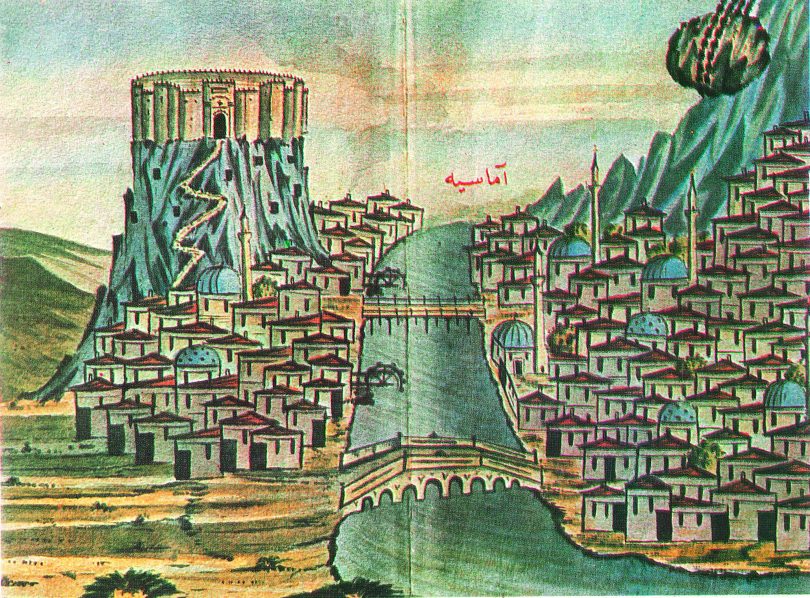 Osman Şakir Effendi, who wrote about some of the ancient cities in Anatolia, reveals an unusual portrait of Anatolia both with his notes and the miniature drawings he made.

Anatolian cities we follow through travel notes, memoirs or brushstrokes of an artist, also have an ancient historical background that brings our region character and beauty. A popular destination among travellers, Anatolia has invariably been popular with this aspect. Aside from the information provided in travel notes of travellers, Osman Şakir Effendi who wrote about some ancient cities in Anatolia, reveals an unusual portrait of Anatolia from Üsküdar to Tehran both with his notes and his miniature drawings.

Osman Şakir Effendi of Bozok who gained recognition with his birth place Bozok town in Yozgat, was appointed as a Farsi translator of a delegacy led by Yasincizade Abdulvehhab Effendi who was sent to Iran by Mahmut II in 1810, and wrote about some of the cities he visited during this journey in his work titled Musavver Iran Sefaretnamesi (Illustrated Book of Embassy: Persia) that also features miniature drawings.

Following this appointment in 1810, Osman Şakir Effendi of Bozok departed from Istanbul and made miniature drawings of Üsküdar, Kartal, Gebze, Hereke Inn, Izmit, Sapanca, Geyve, Taraklı, Göynük, Mudurnu, Bolu, Köroğlu Fountain, Gerede, Bayındır, Çerkeş, Karacalar, Karacaviran, Koçhisar, Tosya, Hacı Hamza, Sarmaşıkkaya, Osmancık, Dingil Hüseyin Pass, Merzifon, Amasya, Zengan, Siyahdihan, Ebher, Kazvin, Kışlak and Tehran respectively, illustrating a total of 31 settlements. He included brief notes he took down for the book of embassy up to Merzifon as well as relaying some historical anecdotes. However he only made miniature drawings of historical cities from there on.

FROM ÜSKÜDAR TO TEHRAN

Şakir Effendi, who arrived in Kartal he likened to a” bird with a broken wing” the day after he spent the night in Üsküdar with the delegation departing from Istanbul, pointed out the tiny houses there. He left Kartal for Gebze, reaching there after five hours due to heavy rain. He stayed in a guest house in Gebze, and noted the small tiled houses and mosque here as well as the cold night he spent here. Şakir Effendi continued his journey to İzmit after staying at Hereke Inn for a while. He stayed in a house with the delegation for two nights at their destination, Izmit. The next day, he travelled on horseback and arrived in Sapanca in six hours. Şakir Effendi stayed in an inn here, admiring the nature of the city. Şakir Effendi who left Sapanca at dawn, observed the bridge built on Sakarya river by the command of Sultan Bayezid II, and gave detailed information about the river. He reached Geyve after a long journey. He stayed in a dilapidated hostel in Geyve, and underlined town’s natural beauty. Later, he left for Taraklı reaching the town after six hours. Şakir Effendi gave detailed information on the hospitality and natural beauty in Taraklı. Later Şakir Effendi arrived in Göynük also called Türbeli for hosting Akşemsettin’s mausoleum, in six hours again on horseback. After he stayed in Göynük, he visited Akşemsettin’s mausoleum with the delegation the next morning. Following the visit, he arrived in Mudurnu after a journey of eight hours. Şakir Effendi spoke in detail about the needle-making profession he came across in Mudurnu village. The delegation who travelled to Bolu from Mudurnu on horseback, faced difficulties due to rugged terrain on the route and was affected by severe cold, snow, rain and storm. After arriving in Bolu, he spent a restless night here also due to cold.

WITH ITS PEOPLE, NATURE AND HISTORY…

Şakir Effendi made a miniature drawing of Bolu that featured the clock tower built by command of one of Abdulhamid I’s viziers Ahmet Pasha. The next day was the Eid al-Fitr so he left during the night, and crossing mountains and hills, he arrived at the district called Köroğlu Fountain near Cağa Lake. Şakir Effendi rested here, and later mentioned the beauty of the mountains and an obelisk located here which he claimed to be three times smaller than the Obelisk of Theodosius in Istanbul. After examining the obelisk and epitaph, he set off on horseback. After a 12-hours long journey, he arrived in Gerede in early morning. Şakir Effendi relayed that the hosts of the house he stayed that night, were unable to heat the house and that they could not sleep because of the sound of hailstorm. After leaving Gerede the next day, they reached Bayındır Village after nine hours. Although they stayed at an inn, he spent an uncomfortable night and left Bayındır in a bad mood, for Çerkeş. After Bayındır, he enjoyed Çerkeş, and he described the flower gardens and genial and hospitable town locals. After staying here for a few hours, they spent the night at Karacalar Village after travelling for nine hours. Leaving at dawn, they stayed at the lodging in Karacaviran the next day. Later, they arrived in Koçhisar on horseback. The delegation spent the night here, and leaving at dawn, they followed Devrez creek route, reaching Tosya after nine hours. They spent the night in Tosya at Gemalmaz İbrahim Aga’s house as guests, and the next day, ten hours after they left Tosya they arrived in Hacı Hamza, a village of 70-80 houses on the banks of Kızılırmak. After spending a night at this village, they took the Kızılırmak route reaching Sarmaşıkkaya surrounded by rocks. Şakir Effendi who pointed out the development efforts by Abdulhamid I’s vizier Darendeli Mehmet Pasha, expressed his admiration for Sarmaşıkkaya and continued his journey.

ONE OF A KIND IN THE WORLD

They reached the bridge with 15 eyes referred to as Osmancık, built by command of Bayezid II on Kızılırmak and called Koyun Baba Bridge today, after eight hours. Şakir Effendi described the characteristics of the bridge as well as Kızılırmak and its spring. After admiring this bridge, which he described as “one of a kind in the world”, he arrived in Osmancık and mentioned a historical castle here in his notes. After Osmancık, the delegation arrived at the range called Dingil Hüseyin Pass where they rested and later arrived in Merzifon after travelling for 16 hours. Travel notes end here. Following their arrival in Merzifon, the ambassador leading the delegation, Yasincizade Abdulvehhab Effendi was hosted by Kadi Mollazade and Şakir Effendi was a guest at the house of Mustafa Aga. Şakir Effendi expressed the hospitality of the people of Merzifon, the nature of the city, its gardens and his admiration for the peaceful scenery. Osman Şakir Effendi’s impressions on some Anatolian cities featured in the embassy book, particularly his miniature drawings greatly contributed to publicity of various historical destinations around Anatolia. Şakir Effendi gave information about inns, bridges, villages, towns and mansions in 24 destinations from Üsküdar to Merzifon. However after Merzifon, Şakir Effendi depicted Amasya in Turkey and Zengan, Siyahdihan, Ebher, Qazvin, Kışlak and Tehran in Iran in his miniature drawings.