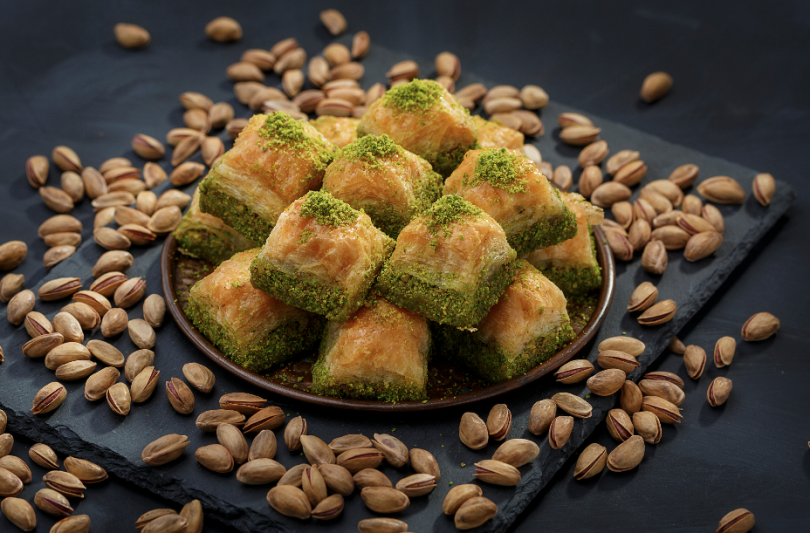 Anatolia has been a land where unique tastes are discovered and spread throughout the world for the last 12,000 years, back when man transitioned to a settled life. Anatolia has been inhabited by various civilizations since prehistoric times. Its soil houses three of the seven phytogeographies[1] on earth as well as multiple trade routes and migration routes. Shaped by all these riches, the Anatolian cuisine has thousands of recipes distilled from the Ottoman royal cuisine, Seljuk cuisine, Turkish-Islamic cuisine, traditional Turkish cuisine and regional cuisines. Not only the dishes but also the variety of fruits and vegetables, drinks, cheese, bread, honey and even cooking rituals constitute the original tastes of fertile Anatolia. The definition by TURKPATENT (Turkish Patent and Trademark Office) states that a geographical indication is the name of a local product, which is fundamentally and uniquely differentiated from similar ones and owes this to the region where it originates from. To this end, a geographical indication is an indication that identifies a product as originating from a particular location, area, region or country which gives that product a special quality or reputation or another characteristic.

The Sultan of Desserts: Antep Baklava

Gaziantep baklava, our first product registered by the European Union, is very special in all respects. Reşad Ekrem Koçu, author of the İstanbul Ansiklopedisi (Istanbul Encyclopedia), says ‘Baklava is the sultan of pastry which does not welcome co-rulers on the throne of taste it sits on’. Although it is part of Arab, Armenian, Greek and even Iranian cultures as well, the pastry that Turks migrating from Central Asia made by baking layers of very thin wheat dough on sheet metal and poured walnut, cream and honey on must be an early ancestor of baklava.  Regardless of whether the origin of baklava lies in Ancient Greece, Byzantium, Arab culture or in the traditions of nomadic Turks, the sophisticated version of ‘traditional baklava’ as we may call it today was created in the Ottoman period. Baklava was an indispensable element on tables at the Palace and of wealthy people. It also became part of state customs. The tradition of the baklava procession that appeared in the late 17th century or early 18th century is the most prominent example. In the middle of the month of Ramadan, baklava was sent from the Palace to the Janissary Guild as Sultan’s compliment to his soldiers. One huge tray of baklava would be allocated for every ten soldiers, with the full trays being displayed in front of the royal kitchen before being dispatched. After the Head Armorer would receive the first tray in the name of the Sultan, each of the other trays would be duly taken by two soldiers. The commanders of each company would walk in front and lead the baklava carriers, who got out of the Palace gates and walked towards the barracks. The Istanbulites would hit the streets to watch the baklava procession and show their love for the Sultan and the soldiers. Considering the modernization of cooking procedures, consumption habits and kitchens as well as the facilitated access to the raw materials used in baklava, this pastry has become today’s “Gaziantep Baklava”. Production increased in Southeastern Anatolia and pistachio, a common ingredient used in regional cuisine, has formed the essential raw material for Antep Baklava, a geographical indication. The use of pistachio in dishes, both salty and sweet, in Southeast Anatolia has increased so much that, during a visit to Gaziantep, one of the senior governmental officials was served the most delicious food from the region, almost all including pistachio, and then asked how he would like his Turkish coffee, to which he responded saying ‘Without pistachio, please.”

Antep Baklava was registered as a geographical indication in 2007 by Turkpatent. It is made by placing plain butter and dark green pistachios called “firik” or “boz-iç” between very thin layers of hard wheat dough. The method of preparing Antep Baklava was inherited down to one generation from the other and was registered by the European Union in 2013.

Figs could be dated back to the times of Adam and Eve according to the sacred texts. They also sometimes appear in a Greek myth or an Indian epic. In this sense, fig is a fruit which has a history as long as the history of mankind. Figs contained various symbols in both prehistoric faith and sacred religions. It found a suitable place to grow in Anatolia. Figs have an important place in Christianity and Judaism due to the references to them, alongside olives and pomegranates, in the Holy Bible and the Torah. Figs are a symbol of fertility and healing. In a hadith narrated by Zemahsheri, Prophet Muhammad said, “If I could get a fruit for heaven, it would definitely be a fig.” So Prophet Muhammad regarded figs to be a fruit of paradise, and therefore Muslims consider figs as “the fruit of paradise”. Furthermore, one of the ingredients put in aşure, a dessert made especially in Islamic month Muharram, is figs. Figs are also publicly called “yemiş”, “ballı darı” and “bardacık”. Aydın fig, the world’s top quality fig, was registered by Turkpatent in 2006 and by the European Union in 2016. Pollination and fruit formation of yellow caprifig depends on a tiny fly called Balstophaga psenes L. available in Aydın region. Turkey is the number one producer of caprifig in the world. Aydın fig is not planted next to houses since fig trees grow too much and produce many branches damaging the surrounding structures, thereby ‘demolishing houses’. It is an important means of livelihood for thousands of families.

Malatya Apricot: The Golden Egg of the Sun

The history of apricot began mainly in China, spreading from there to Central Asia and Anatolia, and from Anatolia to Europe and the Americas. This journey continued with the expeditions of Alexander the Great. Anatolia became the second homeland of apricot since the appropriate climate in which apricots could grow was available in Anatolia among all lands that were part of Alexander the Great’s conquests. It is speculated that apricots were referred to as the ‘golden egg of the sun’ in Mesopotamia, Ancient Iran and Egypt. Malatya is named after the words ‘Melitue, Maldiya, Melita’, which meant ‘orchard’ during the Hittite period. Many fruit species are cultivated in Malatya. Malatya apricot is undoubtedly one of the main fruits grown there. In his travel book, Evliya Çelebi reported that there were 7,800 orchards and seven apricot varieties in the city, where 53 thousand people lived.   In his book, Evliya Çelebi wrote about Malatya’s apricot: “Malatya has seven kinds of juicy apricots, Red, Yellow, Müşmüş, White, Bey, Sulu and Etli, which are all brought to the city in large baskets. If they get bruised, they lose all juice. Each apricot weighs forty or fifty dirhams. God knows the account of apricots. The multitude of them is pulverized and carried from one land to the other.” Among over 1700 apricot varieties around the world, Malatya apricot is one of the most exclusive and is the leader of the world’s dried apricot market. Indeed, Malatya apricot is harvested from more than 20 million apricot trees in Malatya and was registered by Turkpatent in 2001 and by the European Union in 2017.

The production and continuity of production of traditional products with geographical indications in today’s conditions is extremely important for the preservation of cultural heritage. These products changed and evolved in time depending on the periodical conditions, developments and changes in soil, climate and production methods but still maintained their essence from the ancient Anatolian culture. To that end, culinary culture is a heritage of the mankind inherited down from one generation to the other. Perhaps, ‘Firik Rice’ and ‘Hot Meat Casserole’ that the Phrygian king ‘Midas with Donkey Ears’, whose tumulus is located around Polatlı, Ankara, ate at his last supper are the ancestors of ‘Ankara Tava’, a famous dish in Ankara.

Although the taste of mankind changes, eating for satiety is despised in civilized societies. Evliya Çelebi wrote in his famous travel book: “Whether you eat sugar with date milk or bitter millet bread, they’re all the same in satisfying hunger.”[2] Yet he wrote about not only his travels but also what he ate and drank. Indeed, Evliya Çelebi provided many details on the Ottoman culinary culture in the 17th century from bread varieties to bakery, desserts, beverages, utensils and even the cooking culture. He even gave a recipe in his book, explaining the fine details of preparing Anchovy Stew in Oil. [3]

We can also see the reflections of the Western world’s philosophy ‘You are what you eat’ in Anatolian culture. Anatolian cuisine has many meals served to guests on special occasions, holidays, weddings and funerals. The preparations for them start days before. For example, Tarhana, whose recipe changes from region to region, from district to district and from one family to another, contains yogurt, spices, flour and plenty of Anatolian sun and can be dubbed the world’s first instant soup. It caters to any region, any locality and any family. İskilip Dolması, Oltu Cağ Kebab, Malatya Apricot, Susurluk Ayran, Tarsus Hummus, Aydın Fig, Tonya Butter, Urfa Kazan Kebab, Gaziantep Baklava, Adana Kebab, Afyon Pastrami, Kars Gruyere Cheese, Ankara Doner Kebab, Datça Almonds, Bodrum Tangerine, Tosya Rice, Maraş Tarhana and tons of other food have been encoded in the DNA of Anatolian people for thousands of years.