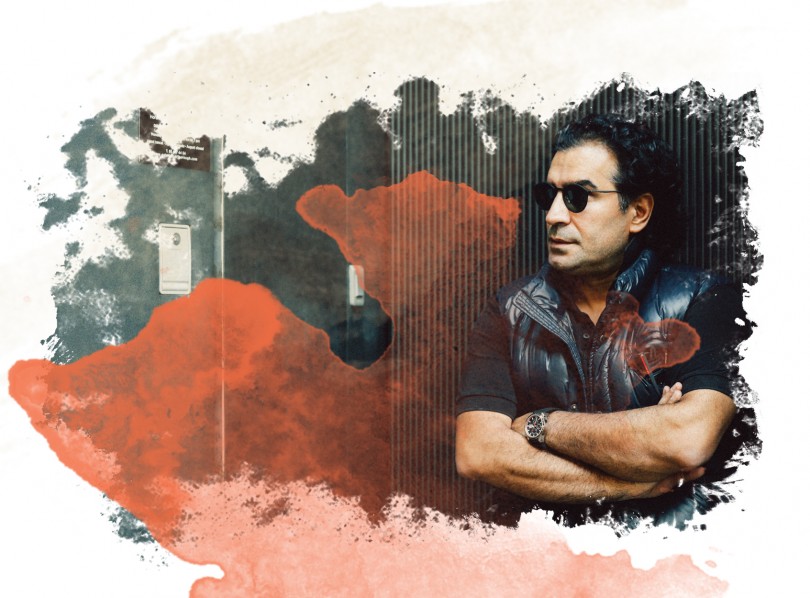 Ahmet Güneştekin exhibiting his works in the most prestigious art galleries of the world which he produces setting off from symbols of Istanbul, says “My works bearing references from my culture, are of major importance for me”.

■ The exhibition you opened in La Pietà, a magnificent building in Venice, made a tremendous impact. How did the idea of opening an exhibition here arise?
La Pietà is a church dating back to 18th century and is a special building diverse from other venues in Venice.
It is particularly not very suitable for displaying large scale, massive works. Nevertheless Pietà fascinated me the
moment I walked in, and I decided to think of ways to open my exhibition here. Emre Arolat who designed the architectural project for the exhibition worked on a construct in which neither the venue nor the works overshadow one another, instead of arranging the venue according to the work or the works according to the venue. Venue has a distinct structure, formed by the stratification and erosion of countless symbolic historical layers for centuries. Interior of the building would be almost entirely covered and disguised during numerous exhibitions held there
in the past. Contrary to this approach, we were very attentive to preserve venue’s unique spirit for the exhibition after Pietà made a great first impression on us. Setting off from this approach, without limiting the authentic effects of both the art and venue which are inherent, we utilized these systematically and by not allowing them to obstruct and interfere with each other, we achieved to associate the works with venue’s aura. They had to coexist and at the same time remain independent. To keep the audience “in contact” with the “venue” in the course of their visit, we particularly focused on light and we ensured that Pietà is perceived as an experience and not merely as an object/ venue.
■ ‘Konstantiniyye’ sculpture was one of the works in your exhibition with inspiration from ‘the Milion Stone’ in
Sultanahmet. What are the meanings you attribute to this 4,5 tons heavy work as a cultural memory?
All the painting and sculptures I envisaged to exhibit in La Pietà are interrelated and deal with cultural history, memory and social gender issues. ‘Konstantiniyye’ sculpture constitutes of giant colorful letter blocks in which
letters of Konstantiniyye are coded, the name given to Istanbul by Ottoman Turks upon their conquest. Each letter features religious symbols concerning the names city has taken from the moment it was established. ‘Konstantiniyye’ summarizes my aesthetic approach with its radiance, colorfulness and figures and symbols both in harmony and conflict, as star of David, Orthodox cross, Catholic Roman cross, crescent, churches, mosques and people which can be distinguished as one walks around it. By demonstrating the layers that have overlapped in city’s cultural memory, it creates a threshold to question the nature of power and power relations. There is a concept I have been observing
for the last 20 years. Social chaos and frequently appealing to social memory in making sense of individual actions.
This results from both societies’ and individuals’ tendency of facing their own history and reconstructing their
identities. The cities we live in do not just constitute the background of history anymore; they have become actors as the spaces where past builds up and were included in the process of redefining the past. I developed a similar concept in my previous works with the theme ‘Encounter Istanbul’. The city we live in shape both our past lives and personal histories as well as our current experiences. Facing the history of Istanbul means facing our own history. I worked on introducing a perspective to make the centuries of stratification in cultural memory visible, with ‘Konstantiniyye’ sculpture.

■ You claim that the works in your exhibition titled ‘the Power of Origins’ opened in Marlborough Barcelona, are
based on Anatolia’s oral tradition and myths. How did you come up with such concept?
There is no doubt that we all come from different places. As a visual artist, what matters to me are my roots. Most tales I selected, are in a broad mythological range. However instead of directly painting the stories, I reinterpret these through creating a new realm. The old mythology still remains however it reappears in different forms repeatedly. This way it becomes a part of the whole constituting my personal world which I express through traditions, colors and images. An imaginary Mesopotamia emerges. The idea of creating a mythological realm
was not a very conscious decision for me. It was my grandmother who constantly shared these grand narratives with me in my childhood; as an Armenian who converted to Islam, she shared not only the myths of a particular culture but those of all peoples. So I was raised in a humanist tradition of religious and cultural tolerance. The philosophical
origin of the works I have created and will create started to take shape then.
■ Why do you think your works draw worldwide attention?
Art allows us to see and discover distinct perspectives; we witness the world of creative minds. Moreover there is no
formula to comprehend modern art; when we view a modern artwork, we make an interpretation based on our pasts,
personalities and mentalities. It is not something explained to us; but something we directly experience and live. Today the visible works on global art platforms are works which are authentic, creative, are based on cultural differences and diversity offering distinct experiences by integrating the audience in the process. I believe modern art to be significant by virtue of the presenting free experience forms and encouraging new perspectives. Today the view towards art should be based on the artist and works produced, and their contributions. My works point to the in-depth research I held on the cultural history of the region I live in, progression of this culture, tragedies and their effects on the modern culture. I think I stand out because I truly internalized my interest towards Anatolian culture, classical culture and legends and myths of the lands I was born in, and that echoed in my works, I reinterpreted those and therefore have attained an authentic voice.

■ How is Turkish modern art perceived in international art arena?
In the last quarter of 20th century, Turkish modern art has gained significant pace. A formation diverse within itself,
provocative at times, and possesses poetic elements as well. We witness an era in which independent voices are
heard, taboos are broken, artists become an individual part of the international art network. But of course this is a formation and we will all see how it will evolve.
■ Let’s go a little back in time. For nearly 20 years, you have traced the art, history, gastronomy, mythology and oral culture in Anatolia and Mesopotamia. How did these journeys reflect on your art?
Documentary series ‘On the Trail of Sun’ was unprecedented, and it allowed me to go on excursions I had always dreamt of. For five years I traveled to historical sites, and collated the true stories, legends, myths of the regions. All the sounds and images were recorded by a professional team and were broadcast on TRT1 as a documentary series. I have come across numerous ancient churches covered in mosaic and frescoes while touring Anatolia. Some had been transformed into mosques, and murals were covered with plaster, partially damaged. Walls bearing figures which are revealed as plaster peels off in time, inspired me for my paintings just like a canvas. These expeditions we embarked on to sense the living of people in the past, examining various cultures in the historical monuments of the regions
we visited, and sharing these with people greatly shaped the contents of my works. I think mythology to be the origin of all things. My works with references from my own culture and linking these myths with the period we live in, are of major importance to me. Because my works are results of this basic approach. Therefore, the works I envisage may take the audience all the way back to the rise of civilization, and manifest the struggle between good and evil, war and peace and reveal the connections between gods, people and cultures.

■ Can you tell us a bit about your goals in the immediate future?
I started the preliminary works for the 57th Venice Biennial. Mark Peet is currently planning my personal exhibition in Visser Gallery Amsterdam, featuring a special collection of my latest works. Marlborough Gallery has determined my exhibition schedule for the next two years; they will organize my personal exhibitions in Switzerland, Netherlands, Qatar, Dubai, New York. and London.