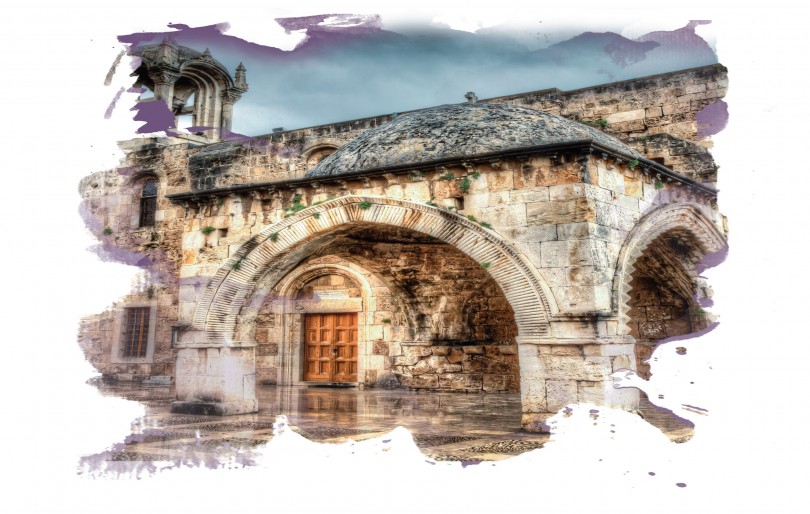 BEIRUT, THE HISTORICAL CAPITAL CITY OF LEBANON, WHICH HAD BEEN RULED BY THE OTTOMANS FOR MORE THAN FOUR HUNDRED YEARS, CONTINUES TO CARRY NUMEROUS TRACES OF THE TURKS, WHETHER IT BE FROM ITS OSQUES TO QUARTERS
AND FROM ITS BAZAARS TO TABLE CUSTOMS. THIS MAGNIFICENT HERITAGE INDICATES
A FRIENDSHIP WITH DEEP ROOTS.

“One day, this city shall follow you”: These words spoken of Beirut by the Istanbul raised, Lebanese poet Konstantinos Kavafis (1863-1933), is enunciative of many things. Beirut, which has experienced many wars and ruins in its history and yet, still managed to rise from its ashes, is one of those places that must be visited. When one takes a look at the last 500 years of Beirut´s history, which draws attention with its multicultural nation consisting of many ethnic minorities particularly with its Muslim and Christian communities just like during the Ottoman Empire, you will see an Anatolian city stand before you.

AND THE HISTORICAL TRAIN
STATION SPEAKS

The fate of the Middle East changes after the defeat of the Mamluks in Syria by the Ottoman army in the year of 1516. The Ottoman State, which overtakes the governance of Beirut following this war, continues its existence in Lebanon for the next 400 years. Historians believe the long duration of governance of this place so distant to Istanbul, was due to a just and fair administration. During that time, Lebanon, which continues its existence under the rule of the Ottomans, also carries the scars from the war. Following the civil war, some Ottoman artifacts were restored and used as government buildings. Today, many Ottoman monuments wait to be renovated. The Beirut Train Station, located to the north of the capital and built in 1895, is on the top of the waiting of work for works for restoration. The passenger waiting hall, which is used as the main building of the Lebanese Railway Administration, has also been renovated. Currently, the restoration of the whole building together with its historical wagons to be turned into a museum, is a project waiting to be implemented. This museum aims to become a historical monument taking its visitors back to the times of the Ottoman´s Istanbul-Hijaz railway routes.

A SOUVENIR FROM ABDULHAMID

There are many madrasahs, hospitals, buildings, samosques, quarters, kiosks, parks, gardens and mausoleums from the Ottomans in Beirut. One of the most attractive Ottoman monuments in the capital city is the Lebanese Prime Ministry Palace built on the highest hilltop overlooking the city. This palace, where the future of the country is determined, was in fact nothing but a military post of the Ottomans. The plans of the Selimiye Military Post located in Istanbul was in actual fact used during its construction in the year 1830. The clock tower located next to the palace was built by the Ottomans in honour of the enthronement of Sultan Abdulhamid II (1842-1918). A few metres away from this location a grand Ottoman mosque can be found. Surely, the Ottoman works are not limited to these. According to official statistics, there are more than 1300 Ottoman works located in Lebanon. The majority of them are located in Beirut. For instance, the building used as the Ministry of Interior Affairs, is also an Ottoman structure. Furthermore, the hospital El-Mihceri ed-Sıhhi, known today as the Katrina Hospital, is one of the Ottoman works that awaits to be restored.

Another work that awaits to be restored is the Hamidiye Public Fountain, which was built in 1900 by the people of Beirut to honour the 25th anniversary Abdulhamid´s enthronement. This ostentatious fountain of 115 years is being restored by TIKA, the Turkish Cooperation and Coordination Agency. The eight metre tall marble fountain has an interesting story behind it; the initial construction site of the fountain was known as the area located in front of the current Prime Ministry Palace. However, the fountain was removed from this location in 1957 and transferred to the Sanayah Park, also built by Abdulhamid Han. After this incident, the fountain was also called the Sanayah Fountain. The fountain was slightly damaged during the Lebanese civil war. Today, its restoration is almost completed.

TRICKLES FROM THE PAST

Byblos, which goes back to 7000 years in history, is an old port town located to the north of Beirut. Although not much is left from the antique column road at its entrance, the bazaar built during the Ottoman era still stands tall. Today, this place is known as the Byblos Market. Amongst the many Ottoman works that need to be restored in Lebanon, the Al-Bashura Cemetery, which hosts the tomb of the Ottoman era Syrian Governor Ahmed Hamdi Pasha as well as the tombs of many other scholars and high government officials, is perhaps on the top of the list. The people of Beirut call upon the Turkish authorities, the Lebanese Government and many non-governmental organisations to protect these works. Another element carrying the deep traces of the Ottomans, who had continued its existence in Lebanon until the year of 1918, is the local cuisine. The rich culinary culture of Beirut, established by those arriving from Anatolia, carries the evident signs of the Ottoman tastes. And there is nothing like sipping a cup of Turkish coffee after dinner at one of the cafeterias in Corniche, a location similar to Izmir´s Kordon district.