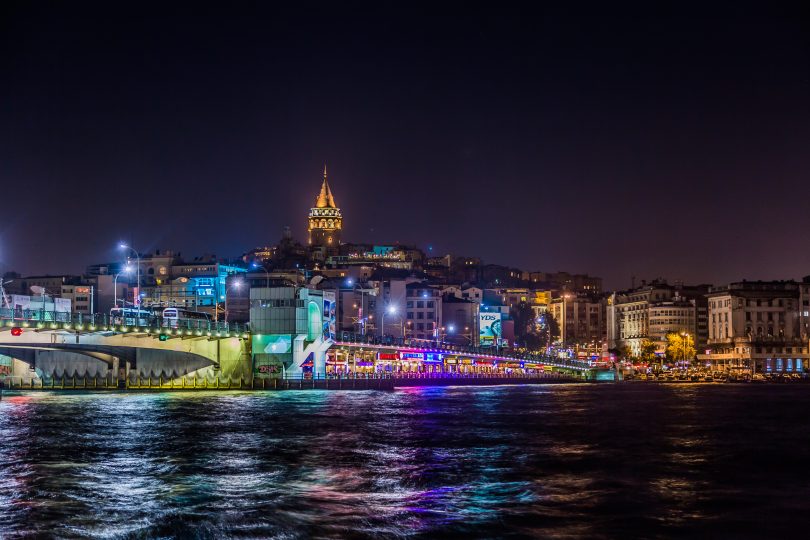 The place of Galata Bridge in Turkish literature is another topic for research.

Famous businessman Nuri Demirağ, a prominent figure in the early years of the Republic, was determined to build a bridge between Ahırkapı and Salacak that would connect the two continents, and made an agreement with the company who had built the suspension bridge in San Francisco. It is rumoured that the project which also received support of Atatürk, was hindered by the Public Works minister of the period Ali Çetinkaya. Nahid Sırrı Örik, an important writer who has not received the due credit, reminds this project to his readers in a short article titled Istanbul and Suspension Bridge published on July 22nd 1945 in Tanin newspaper, and explains his opinions as follows:

“God, in fact forbade our city from the dangers such a public work would pose to the unique vista of Istanbul! Every Turkish citizen concerned with the beauty of Istanbul, our most valuable treasure, with a sensitive and jealous heart, should prevent any violation to the harmony in its unmatched lines. I must admit that I did not mourn when the bulky Courthouse inserted between Hagia Sophia and Sultanahmet Mosque, trying to crush the two buildings, burned down. However a bridge between Sarayburnu and Üsküdar would be a disaster for Istanbul horizons that no fire could overcome.”

After expressing his opinions, Nahid Sırrı says that for years he secretly wished for the demolition Galata and Unkapanı Bridges, and for them to be replaced by wide tunnels. Just as we cannot fathom a bridge between the two sides of the Bosphorus, according to Nahid Sırrı, a bridge should not be considered for the Golden Horn, existing bridges should be removed, and the vulgar works of iron and concrete civilization must be concealed, “As nights are lit up by all lights of the last century, all shores should retrieve the pure face of old times, and we must maintain them appearing distant and longing for each other, grieving over not joining.”

How to celebrate the 500th year of the conquest was a topic widely discussed back then and Nahid Sırrı ends his article as follows: “Can a second program to be signed after 500th year celebrations, deal with the issue of removing bridges and replacing these with tunnels which cross the sea that separates our city into districts, more precisely into cities? No one should be allowed to even propose a suspension bridge again.”

As I read the article, I sighed, telling myself “Do you have any idea what happened in Istanbul after you passed away Mr. Nahid Sırrı?”

Nahid Sırrı who passed away on January 18th 1960, must have followed the discussions and ventures regarding Boğaziçi Bridge (recently named July 15th Martyrs’ Bridge) in 1950s. I do not know if he wrote something during the time of these discussions. He could not live to see the first bridge built so he brought an image of Bosphorus without a bridge behind his eyes. If he can follow the events in this world from afterlife, presumably he got very upset as the second and third bridges were built in Istanbul in time due to ever-increasing population. He must have found consolation with Marmaray and Avrasya tunnels. Maybe with a bittersweet joy he said, “Great, this is what I had imagined!”

Immediately after Avrasya Tunnel was opened, another incident took place which I assume pleased Nahid Sırrı. Historical Galata Bridge that served between Balat-Hasköy since 1922, was closed down for traffic in 2012 for inhibiting circulation and shipping in Golden Horn, and the middle section was disassembled. Later it was completely removed and was transferred to a shipyard in Tuzla.

Removal of Galata Bridge must have undoubtedly pleased Nahid Sırrı however it is certain that his joy was “incomplete”… Because now there is a bridge much unsightly than the former bridge between Eminönü and Karaköy. The bridge between Unkapanı-Azapkapı is still in its original place. And they have two more siblings: Haliç Bridge and Haliç Subway Bridge…

Metropolitan Municipality was to decide on how to make use of former Galata Bridge after repairs, however we still do not know if they reached a decision. This bridge that served the people of Istanbul for a total of 80 years between 1912 and 1992, and made it to the memories of several generations, should be meticulously preserved to be exhibited in a City Museum if one is to be inaugurated. Galata Bridge was very special, not only for Istanbul locals but also for foreigners who were fond of Istanbul. I published the translation of an elegiac article by an Italian writer when it burned in 1992, in the “Culture” section of Tercüman newspaper. I crossed the former Galata Bridge on foot for the first time in early 1970s. I remember well how I admired the City Line ferries docked on bridge piers and Sarayburnu, resting against the railings; just like in amazing photographs of Ara Güler… Like three countrymen with flat hats and rugged clothes, who probably just arrived in Istanbul, lean over railings, watching the Golden Horn and ferries. Their backs to us; if we could see their faces, we would notice the amazement in their eyes. I do not know if there is a photograph that better depicts the relation of Anatolia with Istanbul.

Galata Bridge a.k.a. Cisr-i Cedid (New Bridge), Karaköy Bridge, Wooden Bridge, Floating Bridge, Immersed Bridge, was not the first bridge built in the Golden Horn however symbolically, it is important than Unkapanı Bridge beyond comparison. Wooden Galata Bridge that came into service only six years after the proclamation of the Edict of Gülhane, connected the Ottoman world to Europe through Galata; it also was to connect Topkapı Palace with Dolmabahçe Palace overland which was a European-style palace. Its construction was launched around the same date.

Galata Bridge connecting the two sides, was at the same time a symbol of a serious breakthrough and being a toll bridge, it also signified a considerable transformation in economical approach. We must remember that the bridge between Azapkapı-Unkapanı was free to cross so it was referred to as Hayratiye (Charity) and later when a cunning vigilante named Kandilci Reşit, like Deli Dumrul (from the saga), held the bridgeheads to forcefully charge people, he was expelled to Kos.

One must read the section titled “Bridge” in İstanbul 1874, a great book by Edmondo de Amicis to better understand how Galata Bridge became an essential part of life in Istanbul right after it was built. This extraordinary description beginning with the sentence, “In order to observe Istanbul locals, one must visit the quarter-mile long bridge built on buoys that stretches between Galata and other side of the Golden Horn,” continues for pages. Amicis was one of the people who realized that although it was built on European side, the Bridge symbolically connected Europe to Asia. European travellers, writers, artists and photographers took a special interest in Galata Bridge that served the people of Istanbul for 35 years until 1912. Fausto Zonaro gained the title “The Artist of the Sultan” with his famous painting that portraits Ertuğrul Cavalcade crossing the Galata Bridge. Zonaro explains in detail how he made this painting dated 1901, how he presented it to the Sultan, and how he became a palace artist. In his painting titled Fire, he depicts a fire brigade crossing the Galata Bridge to fight a fire. Unfortunately, the whereabouts of the original painting is unknown today. Zonaro with a few more paintings which depict the life on Galata Bridge, must have particularly chosen the bridge to represent the human aspect in Istanbul in the best way. This makes me think that he read Istanbul 1874 by his fellow countryman Amicis before visiting Istanbul.

Turkish intellectuals were not so fond of Galata Bridge. Mehmed Âkif delightfully mocks this bridge in Safahat. In Süleymaniye Rostrum, he mentions the Bridge that rocks around during strong southwester winds because it was built on buoys, saying “For example, do not ask if the grandfather of this wooden road we crossed that rocks around, was a raft; suppose it is a floating boulevard. The bridges are suspended in Europe, so what? Let them be! The bridges of the Orient are immersed. And look at the history, where else can you come across a submarine bridge?”

Âkif chats with another friend in Fatih Rostrum as they approach the Bridge on a ferry. In this section of the book, he ironically explains how old ships angrily bump into the Bridge while docking, and how the pain in the belly of poor gutted Bridge cannot be soothed before it ate “at least six-draws of wood”. In an article, Ahmet Rasim relays the conversations between the passengers on the pier like a candid tape recorder, who just got off from the ferry that tried docking the Bridge for 20 minutes.

The ferries under Şirket-i Hayriye, İdare Mahsusa and later City Lines, would dock the piers on Galata Bridge. Refik Halit Karay tells in a newspaper article that the Bridge should be saved from serving as a pier for suburban ferries right away because it was unable to handle the traffic growing each day, and the crowd blocked the Bridge, a main artery for Istanbul locals, as they ran to piers and got off from ferries. This article was published on April 26th 1958 in Yeni Istanbul newspaper. However -if I remember correctly- the ferries unloaded the passengers on the Bridge until 1980s. Even Yalova ferries… Until 1992, it carried millions of people between the two sides. For literature, cinema and photography, it was one of the most attractive destinations in Istanbul with its piers City Lines ferries docked, fishermen’s restaurants, fishermen, salesmen, and crowds; unfortunately it was replaced in 1992 by a poorly-designed bridge which cannot be compared to the former one.

The place of Galata Bridge in Turkish literature is another topic for research. Other references can be found. For now, I just would like to remind my readers the poem Galata Bridge by Orhan Veli, and I would like to express that I miss Galata Bridge which bade farewell to Golden Horn, at the risk of upsetting Nahid Sırrı.