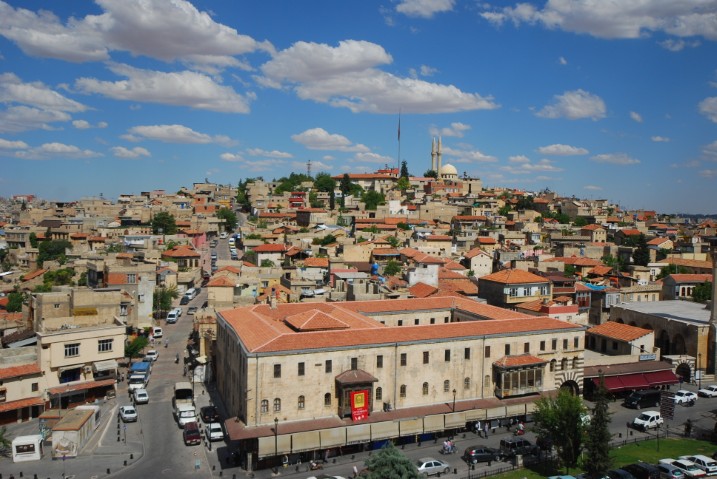 Gaziantep, included in the UNESCO Creative Cities Network with its eight thousand years old cuisine in which Anatolian, Mediterranean and Middle Eastern cuisines are synthesized, resembles a giant, colorful table set in the southeastern Anatolia.

Although baklava and kebab are the first ones to appear in minds when Antep is mentioned, we are before a city with an astonishingly wealthy historical and cultural background. Kebab shops, pastry makers, liver sellers and of course baklava places seem like they are in a competition to whet visitors’ appetites. Walking on the narrow, meandering streets of the city that covers its worn appearance with a new face, makes one feel like solving a puzzle step by step…

In 1920s, Antep was under occupation. The city defended itself on the narrow alleyways and won a victory. When the arched gates on the high walls on both sides of city’s streets are closed, “life” suddenly gets isolated from the outside. “Life” is the name given to courtyards here. Most paved with stones, some of the courtyards are decorated with patterns, and some with rose embossing that adorn the fountains… Traditional Antep houses that display unique examples of Southeastern Anatolian stone-masonry, are works of old masters. These fine houses Antep locals dote upon, castle that is still the apple of city’s eye although worn down by centuries, Kalealtı where a dynamic trade is continued for centuries, Arasta Bazaar smelling of spices, stone inns scattered around streets are like projections of the complex mood of this city which is a color and sound fair… The area surrounding Yüzüncü Yıl Park on the banks of the river that intersects the city is Gaziantep’s modern face. Jewish people once resided in Eyüboğlu district and Düğmeci Neighborhood which is now home to the ruins of a synagogue, in this city once celebrated diversity. Church built in Tepebaşı in 1892 is another symbol of city’s multicultural past. Kendirli Catholic Church on Atatürk Boulevard is one of the temples that survive the past…

Gaziantep known as Doliche in the Antique Age, is one of the oldest settlements in the world according to numerous sources. The city that hosted countless civilizations from Commagene to Byzantine, has been under Turkish rule since 11th century. It received “Gazi (Veteran)” title for the battle fought against enemy occupation in the years of Turkish War of Independence. Antep Castle rising over city’s highest hill Kudret Rock has preserved its glory since the Hittites. The tunnel in the castle that resembles the entrances of Roman amphitheaters, battlements and observation terraces offering a 360 degrees city panorama, the ruins of mosques and baths dating back to Ottoman are worth seeing. One must visit Şahinbey Neighborhood to observe the finest examples of local houses. High stone walls of houses lined up along narrow alleyways, are built to protect the residents from the scorching summer heat. There is as much history below the city as there is above. There are tunnels called “cave” in most old houses. Researchers liken Gaziantep’s underground to a massive ant nest.

Streets stretching out among kebab houses at every step, baklava places and shops that sell textiles and fabrics with local patterns, open to historical Uzun (Long) Bazaar famous for its copper-smiths and spice stores. It is not difficult to come across shops which offer the best variety of Antep kebabs in the vicinity. Ali Nazik kebab served on aubergine puree, şöbiyet pastry, keme mushrooms, küşleme (back meat of sheep) and many more… After Uzun Bazaar, mother of pearl workshops are the next in line. Archaeology Museum where mosaics and archaeological artifacts unearthed in Zeugma and nearby archaeological sites are exhibited, is one of Gaziantep’s most exciting corners. Gaziantep is the city of old and elegant mosques as well… The oldest mosque Ömeriye, Boyacı with a minaret with a wooden roof and a pulpit carved from rosewood, Sheikh Fethullah with a bathhouse and tombs, Tekke where Mevlevi dervishes sought enlightenment once, Kurtuluş with its magnificent stone-masonry and minarets built over the bell tower are some of the historical mosques in the city… Gaziantep which has been a trade center throughout the history, appears as a city of bazaars and inns and that befits its dignity. You must visit some of the inns as Kürkçü (Fur makers) Inn, Tuz (Salt) Inn, Mecidiye Inn, Şıra Inn which will surely make their presence felt as you tour the city. For those who would like to make their Gaziantep itinerary richer with excursions, Doliche Ruins and Underground Sepulchers, Belkıs-Zeugma and Rumkale are the ideal destinations.

Autumn months find people retreating from streets into homes, in a colorful rush in Antep. Because women go beyond the daily rush of their households and participate in an incredible production process. In the wee hours, pistachio cracking sounds rise from houses in İnönü Neighborhood; sharp odor of hot peppers emanate from the Demirligane and Perilikaya Neighborhoods, bell peppers and aubergines are dried on the terraces called “summerly”, churchkelas are dipped into massive cauldrons in Savcı Neighborhood, and it is all their work. Is it easy? This is a region where dining is regarded a life-style. And it is almost always kebab time. It is customary to first eat beyran (Rice with soup) at five in the morning, and eating and drinking continues till midnight with katmer pastry, yuvalama (soup with meatballs) and baklava. It is an Antep classic to stop by at 100 years old Tahmis Coffeehouse and have a foamy Turkish coffee accompanied by an orchestra called “Cümbüş (Jollity)”. According to writer Ahmet Ümit from Gaziantep, local cuisine which is diversified thanks to contributions of various cultures, gives an idea on how the table in paradise might be. You might agree with the famous writer upon trying Antep delicacies.

Export leader of Southeastern Anatolian region with its developed industry and a population reaching up to two millions, Gaziantep aims to become Anatolia’s tourism capital. Thousands of people are employed in nearly 20 hotels built for this purpose. According to journalist Coşkun Aral, Gaziantep might exceed the goal of attracting a million tourists yearly by diversifying its tourism. Indeed there are innumerable attractions to amaze one in this city which gradually transforms into a museum city: Turkey’s first glass-work museum Medusa where you can see 4000 years old toys, is just one. In addition; planetarium science center, fairy tale park, botanical garden and ecological city projects are some elements demonstrating city’s tourism potential. 5,5 kilometers long Culture Road that takes Gaziantep Castle as its center, is a new asset for the city. Walking on the serpentine streets where a total of 19 inns, 9 mosques and 4 bathhouses including Ali Nacar Mosque, Naib Bath House, Gümrük Inn, Zincirli Bedesten, Tahmis Coffeehouse, Almacı Bazaar and Bakırcılar (Copper-smiths) Bazaar are lined up, is like gliding through layers of history. The city’s face is changing with restoration of around 500 houses and mansions on the Culture Road and more than a 1000 shops. On this road which also functions as a shopping route, authentic handicrafts as yemeni-making (flat-heeled shoe), copper-working, mother of pearl inlaying and kutnu fabric weaving are survived. City, an utterly dynamic trade center from past to present, resembles a huge open air bazaar. As historical inns are lined up one after the other, bazaars are intertwined. Where else can one witness how kutnu fabric, survived as a handicraft and referred to as “Like Gold” in the song written by Kerem for his lover Aslı, is weaved fiber by fiber in bright colors?