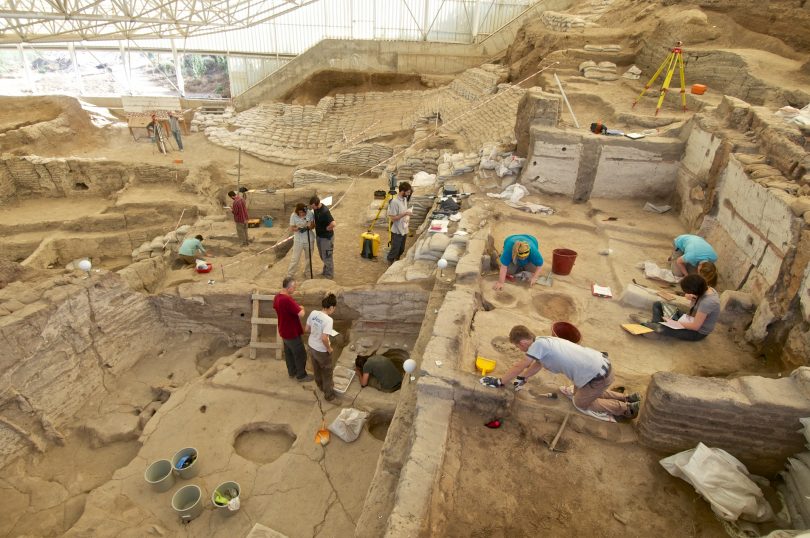 UNESCO World Cultural Heritage Çatalhöyük, greets the modern age with nine thousand years of history. How about getting to know this Neolithic Age settlement through entertaining question and answers?

1 WHY IS ÇATALHÖYÜK IMPORTANT?

Next to being a neolithic city, Çatalhöyük witnessed major social changes as emergence of agriculture and hunting, and was established on an area of nearly 14 hectares in Southern Anatolia plateau. There are two mounds that form Çatalhöyük, as Eastern and Western, and the older Eastern Mound is composed of 18 Neolithic settlement layers. It is possible to come across wall paintings, reliefs, sculptures and other artistic elements that symbolize social organization and sedentism in these layers. The Western Mound displays cultural characteristics of Chalcolithic Period dated between 6200 and 5200 BC.

2 WHAT IS ITS HISTORICAL JOURNEY?

When the community at Çatalhöyük started to adopt a sedentary lifestyle around 7100 BC, they were planting already domesticated plants or plants they had recently domesticated. Eastern Çatalhöyük composed of 14 overlapping layers, was dated between years 6500 – 5650 BC using Carbon-14 method. The settlements are formed by adjacent houses with separate walls. After the mound was discovered by James Mellaart, David French and his colleagues in 1958, the excavations were launched in 1961. English Professor Ian Hodder who relaunched digs in 1993, widely publicized the finds, and Çatalhöyük is now known all over the world. Çatalhöyük was included in the UNESCO World Heritage List in 2012.

3 WHAT IS THE ORIGIN OF ITS NAME?

The mound was named Çatalhöyük (Fork Mound) because two hills with different altitudes resemble a fork.

4 WHAT DISTINGUISHES IT FROM OTHER NEOLITHICAL SETTLEMENTS?

We know that there is an establishment, development and decline phase for all settlements. Çatalhöyük was developed beyond a rural settlement and was going through urbanization process, and this is what distinguishes it from other cities.

5 WHAT MATERIALS WERE USED TO BUILD HOUSES?

All houses in Çatalhöyük were built by using square adobes made with a compound of sun dried mud and hay, reed, wooden posts and plaster. The main materials used in construction are adobe, reed, tree, clay, lime, mud and hay.

6 HOW ARE THE HOUSE PLANS?

The houses in Çatalhöyük generally have two rooms, a warehouse, a cellar and a kitchen. The plans of all houses are similar. Another distinguishing feature is houses not having windows. The plasterwork and geometric forms on interior of buildings, emphasize the importance people gave to beautifying their living spaces. The doors of houses do not have resemblance to doors as we know them. Entrances and exits are through holes opened in the ceiling. Due to attached houses, the concept of street did not emerge in the settlement area.

7 WHAT DOES THE BULL FIGURE FREQUENTLY SEEN ON HOUSE WALLS, SYMBOLIZE?

The bull figure had a sacred meaning in that period, and because of this, it is widely seen. Such that, even heads of real bulls were used as wall decorations.

8 WHAT ARE THE TOOLS AND MATERIALS DISCOVERED IN ÇATALHÖYÜK?

Pottery, ceramics, crocks, flints, spearheads and mirrors made of obsidian, press moulds made up of rock and clay, and household items made of bone have been discovered in the archaeological site to date.

In the ongoing studies in Çatalhöyük, new remains are found and new materials to be exhibited are uncovered. It is obvious that one of world’s oldest communities had assets worth exhibiting and protecting. Accordingly, Koç University Anatolian Civilizations Research Centre (ANAMED) hosts an exhibition on Çatalhöyük. The exhibition titled An Excavation Story: Çatalhöyük, is at the same time a celebration of the 25th anniversary of the launch of excavations in Çatalhöyük.

Çatalhöyük buildings are before the visitors thanks to the scientific studies carried out at Çatalhöyük, reconstruction of the finds with three-dimensional modelling, laser scanning of excavation sites and VR (virtual reality) method. This makes it easier for visitors to experience and understand Çatalhöyük. The content of the exhibition curated by Duygu Tarkan, was developed under the guidance of Prof. Ian Hodder, and prepared by contributions of Çatalhöyük researchers.

The exhibition offers the opportunity to explore the research conducted to shed light on one of world’s oldest communities’ transition from hunting-gathering to agriculture and their socio-economic organization. Çatalhöyük will meet with visitors with archaeological digs and unknown aspects in Beyoğlu ANAMED until October 25th . For information about the exhibition that can be visited for free: anamed.ku.edu.tr