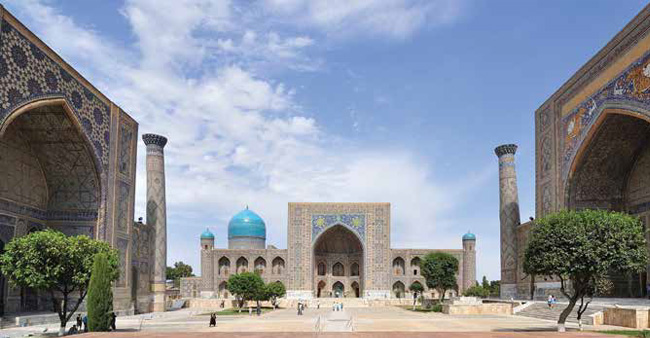 FOR THOSE WHO ARE TIRED OF MODERNITY’S SHALLOW, COLOURLESS, A LITTLE INVASIVE ATTITUDE THAT OVERLOOKS THE INDIVIDUAL, CULTURE AND HISTORY, WHILE DEMOTING THE INDIVIDUAL DOWN TO MATERIAL AND DEHUMANISING HIM: THE DESTINATION IS OBVIOUS SAMARKAND AND BUKHARA.

For thousands of years, Samarkand and Bukhara have been the destination where east meets west. While the discussions of whether the civilisations will clash or not continue as we speak, one can be assured that Samarkand and Bukhara too, have said things and still have more to say. For, both cities have been embraced tightly by the Mawara’un- nahr (Transoxiana) region for three thousand years thus, if the Silk Road was to be a body this region would be the trunk. This body has never torn the different clothes tailored for her body made with different historical-cultural motives by tailors with different identities. Perhaps it is this ancient feauture of Ma wara’un- nahr which makes Samarkand and Bukhara, different, wise and loyal.

The historical depth of Samarkand and Bukhara and the unique cultural treasures of the structures and its beauties cannot be explained in this short piece. Aside from being a historical place for both the Turkish and Islamic civilisations, this region is the joint heritage of humanity and thus cannot be explained in such a short essay. However, I will have to make do with discussing a few of the jewels of these distinguished cities.

Today’s Samarkand, to a large extent, is inherited from one of history’s most important figures, a commander and a statesman who has never been beaten; Emir Timur (Tamerlane), and his grandson Uluğ Bey who was a man in charge of his pen and sword. By making Samarkand the capital city, Emir Timur returned to it the prosperity it deserved. However, not much of Emir Timur’s work and monuments remained due to the ruthfulness of time, natural disasters and wars. The historical Keş city and Emir Timur’s palace and military headquarters, the Ak Palace, still remains in the historical southern city Şehr-i Sebz despite all the destructions it had too suffer. Today, this city still welcomes its visitors.

Imam Bukhari, the author of the ‘Kütüb-i Sitte’, a book favoured by the Islamic world, is buried in the Harteng village on the Dahbid road, west of Samarkand. Visitors are mesmerised both by the architecture of the complex and by this big personality’s repertoire of having memorised 300,000 hadiths. Surrounded by rose gardens, the ‘külliye’ attracts attention with its maintenance and cleanliness both in its interior and surroundings.

The Registan Square has become the symbol of Samarkand. This symbol is comprised of three grand madrasahs that face one another. The first of these was founded by Uluğ Bey in 1420 and is named after him. With the work of Uluğ Bey, Kadızade-i Rûmî from Bursa, Ali Kuşçu and Gıyasüddin Cemşîd at this madrasah, the foundations of our modern day astronomy was set. Uluğ Bey, engraving the hadith that ‘to learn knowledge is obligatory for all men and women’ on the crown door of this madrasah, actually illustrates the philosophy of a civilisation.

Another structure that stands as a resource for Uluğ Bey’s teachers and students is the observatory that he had ordered Kadızade-i Rûmi from Bursa and Gıyasüddin Cemşîd to build. Uluğ Bey’s famous work on astronomy titled ‘Zîc-i Kürekânî’ or ‘Zîc-i Sultanî’ have come to life with the observations he made here. Surely one cannot help but have many questions of why and how when visiting these monumental sites. As these lifeless witnesses that have been engraved into history are impatientyly trying to explain so much to those that will understand their language.

Another unique structure that voices the historical story of Samarkand is the Şâh-ı Zinde Külliye. Built on a hill, this külliye bosoms the graves of the Prophet’s nephew Kusam ibn Abbas, Emir Timur’s commander Tuğluk Tekin and his mother, Emir Timur’s sister Şirinbike Ağa, his older sister Türkan Ağa and her daughter Şâdmülk Ağa… Emir Timur’s wife, Tuman Ağa, has nestled next to her family by building a masjid here, and later being buried there too. Showing great loyalty towards his teacher Kadızade-i Rûmî from Bursa, Uluğ Bey also buried his teacher in this very spot considering him of his own family. The two magnificent domed graves can easily be seen from all over Şâh-ı Zinde. The renowned hospitality of the Uzbeks towards not only the Turks but to all humanity with their saying ‘Mihman atandan uludur’ (A guest is nobler than your ancestor) is evident when one visits this site.

And the Gur-e Amir… With his mausoleum made from nephrite stone, Emir Timur lays right in the middle of his children and grandchildren… Uluğ Bey; Emir Timur’s greatest heir, Muslim emperor and scholar whose name has been given to a crater on the moon also rests at the feet of his grandfather. Emir Timur’s teacher, Sayyid Bereke, is buried above him, while his son Mirza Şahruh, who came to power after him, lays to his left.

Bukhara is called the Buharay-ı Sharîf in historical resources. How can you not do so… Thousands of years ago, the Minâre-i Kelân (The Big Minaret), guided caravans travelling through The Kızıl Kum Desert (The Red Sand) just like a light house and invited them to Bukhara. The Han or Cuma Mosque and madrasah and the Mîr-i Arab madrasah are situated around the area surrounding Bukhara. In 1918, when Istanbul was occupied, the Uzbeks had gathered around the Minare-i Kelan and protested the occupation of Istanbul.

İsmail Sâmânî’s tomb stands tall as one of Bukhara’s historical symbols. Once you travel towards the north of the city and come to the Kasr-ı Ârifan village, you will realise that right in front of a structure the cars slow down. Do not be surprised, as Bahâüddin Nakşbend’s tomb is located here and out of respect, the Uzbeks slowly drive pass their Sufi leader. Next to the grand tomb made from marble, the original four minaret tomb remains intact.

If you happen to pass by or have the chance to visit Bukhara, the ancient capital city of knowledge and spirituality, make sure you see Gucduvan. Throughout his life, Uluğ Bey builds three madrasahs – one in Samarkand, one in Bukhara and the other in Gucduvan. The madrasah in Gucduvan was constructured right infront of the tomb of Hâcegân-Nakşbendiyye’s most renowned sufis, Abdülhâlık Gucduvânî. Indeed Uluğ Bey has left such a significant mark here in Gucduvan for those who would visit it that, the spirit that crowned the Islamic civilisation is seen here. This is very important in terms of understanding the Uzbek Model’s meaning and historical roots as well as understanding the Timurlu (Tamerlane) Renaissance. Knowledge and spirituality being man’s complementary parts… The Uzbek President Kerimov stresses knowledge and spirituality in his book ‘Yüksek Maneviyat Yenilmez Güç’ (Exalted Spirituality, Invincible Power) in which he emphasises the importance of these terms and the importance of wise understanding.

Uzbeks believe that visiting the inherited monuments from your ancestors is not an option but an obligation. Hence, the Uzbek government has special policies to protect more than 4000 historical monuments and sites not only in Samarkand and Bukhara, but those also in Tashkent, Hive, Kokand, Namangan and Nesef. Surely, your gratefulness towards the Uzbeks will increase once again when you visit these sites and see order and cleanliness throughout, as well as when you experience the hospitality of the Uzbeks.