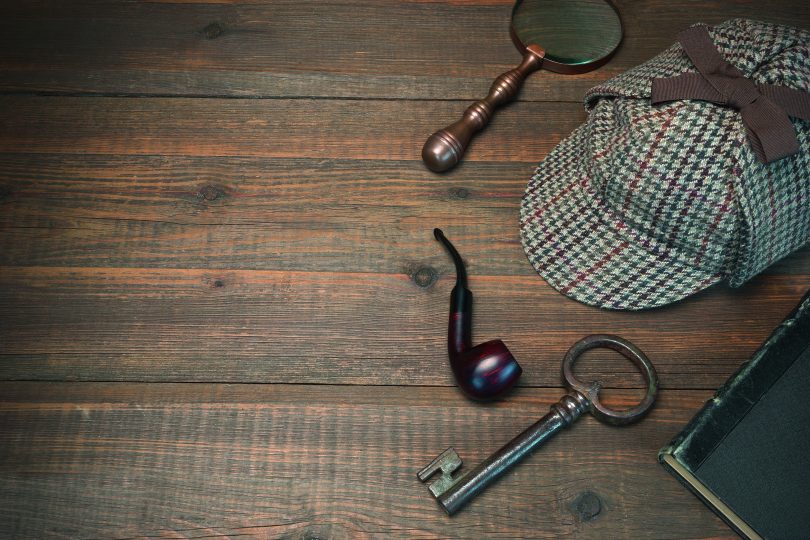 It has been a topic of discussion whether or not detective fiction is a literary genre since its first examples to date, and it has been treated as the “stepchild of literature” for many years in the world of literature.

For some, it was a recreation to pass the time and a distraction. Some regarded detective novels as harmful as smoking and solving a puzzle. Fortunately all these diverse and adverse opinions could not hinder the progress of detective fiction. Moreover, today we can see excellent examples to thrillers in Turkey.

Morgue Street Murder written by famous American story writer and poet Edgar Allan Poe and published in 1841 in Grahm’s Magazine, is considered as the first example of detective novels in the West, although a number of similar books had laid the foundations. The Mystery of Marie Roget (1842) and The Purloined Letter (1845) written by Poe, are also early examples of detective novels.

Mysteries waiting to be solved, curious incidents, committed crimes, detectives in pursuit of killers… A little excitement and a bit of fear… These mysteries that have made detective fiction desirable all over the world, also appealed to Turks and forty years after the first detective novels were published in the West, Turkish people got closely acquainted with detective fiction. In the historical background of this acquaintance were the events that followed the Reformation and the Crimean War and close relations with the West. At the beginning, mainly French detective novels were translated into Turkish. The first novel translated by Ahmet Münif in 1881 was Paris Calamities by French novelist Pierre Alexis de Ponson du Terrail. In 1881, “Master Father” of Turkish Literature Ahmet Mithat translated Emile Gobariau’s novel titled Orcival Murder, published it serially in his newspaper Tercüman-ı Hakikat and later published the novel. In 1889, there was a boom in translating detective novels, and dozens of translations were made until the beginning of the 20th century. Names such as Süleyman Nazif, Ahmet İhsan, Ali Kemal, Hüseyin Rahmi, Tevfik of Thessaloniki, Mehmet Ata were the prominent translators of the period.

Although translation efforts continued without slowing down until 1902 -1903, they came to a halt until 1908; however there was a second boom in translation of detective novels after 1908. First, the ever famous Sherlock Holmes (Conan Doyle) and Arsene Lupins (Maurice Leblanc), Gaston Leroux and Fantome series were translated. Translations of popular thrillers that depicted the adventures of fictitious characters such as Nick Carter, Nat Pinkerton, and Pick Vick which appeal to wider masses, followed.

Many Sherlock Holmes stories were translated into Turkish by a number of translators, particularly Faik Sabri Duran, between 1909-1919. First Arsene Lupin series were published serially in Asır newspaper by the owner Fazlı Necip, and in 1909 the book was published in six volumes. After that, Arsene Lupin translations were continued until the years of Letter Revolution. But all these efforts were replaced with silence as the First World War broke out, until the war came to end in 1918. Let’s leave the topic of translation here, and discuss the copyrighted works in Turkish literature.

The author of the first Turkish detective novel was none other than the popular name of the Reform era literature Ahmet Mithat Efendi, who wrote in all genres of prose. He had his work titled Esrâr-i Cinâyât issued in Tercüman-ı Hakikat in 1883, and published it as a book in the following year. However, his most acclaimed detective novel was the book titled Haydut Montari published in 1888.

Another newspaper owner, Fazlı Necip of Thessaloniki is the second figure to mention in copyrighted detective novels. The work titled Cani mi, Masum mu? he wrote in 1901, was his first attempt in this genre. With declaration of the Second Constitution, he started issuing his series titled Roman Hazineleri, and he dedicated the first six volumes to Arsene Lupin translations as he released Dehşetler İçinde in the following three volumes.

Now it was time for local protagonists… In 1913 Ebussüreyya Sami launches Amanvermez Avni series, promoting him as “Turkish Sherlock Holmes” which was a success. There were even imitations as Amanvermez Sabri (1928) and Amanvermez Ali (1944). Amanvermez Avni was a private detective who would assume all kinds of disguises and pursued criminals all around, solving murders one by one with his wits and fists.

Cinayet Koleksiyonu by Hüseyin Nadir, he adapted from Fantomas in 1922 depicted the adventures of Fakabasmaz Zihni and was a successful series that continued for six years. Such that Fakabasmaz Zihni was referred to as Arsene Lupin of the Orient. But there is no doubt that the most famous detective series was Cingöz Recai. The series written by Peyami Safa with the alias Server Bedi and first published in 1924, was continued for many years. Although Cingöz Recai, also the first Turkish detective novel character adapted to cinema, was an adaptation of Arsene Lupin, Turkish detective fiction doyen Erol Üyepazarcı states in an interview that some adventures of Cingöz were more sophisticated than those of Lupine’s.

In the meantime, Peyami Safa worked with characters as Cıva Necati and Çekirge Zehra in 1940s. In 1926, Kandökmez Recai created by Osman Nuri took the stage and met with the readers as the “Nat Pinkerton of Turks”.

With Alphabet Reform, all literary genres went through a decline period of several years which also affected detective fiction. After 1930, a mobilization can be observed once again. First the series published in Arabic letters, were reprinted with the new alphabet. At the early 1930s, Cemil Cahit used the alias Oğuz Turgut to publish a detective story serially with the title Meraklı Romanlar Serisi. He published the series titled Hafiyeler Başkanı Kıskaç Hamid this time with Yavuz Turgut alias. Around the same years, Vâlâ Nureddin released Yılmaz Ali series. Names such as Hikmet Feridun Es (İki Cinayet Gecesi), Süleyman Çapanoğlu (Milyon Avcıları), Tahsin Abdi Gökşingöl (Oniki Kadının Esrarı), and İskender Fahreddin Sertelli (Casus Mektebi, Amerika’ya Kaçırılan Türk Kızı, 25 Kocalı Kadın…) should be mentioned in this period. As detective fiction in the world lived its golden age in 1940s, Server Bedi was still the leading figure in Turkey. Master of thriller demonstrated his skills in Zeyrek Cinayeti, Arsen Lüpen İstanbul’da and Beyaz Cehennem. His work titled Selma ve Gölgesi, is one of the most successful detective novels in Turkish language. As Hüseyin Rahmi Gürpınar joined this movement with Kesik Baş, and Halide Edip Adıvar with Yolpalas Cinayeti, Nazım Hikmet accompanied them with Yeşil Elmalar he released with an alias.

After 1950, Mike Hammer took Turkey by storm. The adventures of Mickey Spillane’s detective Hammer was translated by Kemal Tahir with the alias F.M. and this series became a best-seller. Such that, when Spillane wanted to retire from writing novels, Kemal Tahir was asked to continue writing Mike Hammer series and he wrote four stories which also became very popular. Then hundreds of writers wrote hundreds of Mike Hammer stories and among them Afif Yesari leads with 180 stories.

The adventures of Murat Davman, the most popular detective novel character between 1960-1975, were written by Ümit Deniz. Some were adapted to cinema. In these years, the fine detective novels written by Vâlâ Nureddin’s wife Müzehher Vâ-Nû hit the book stores.

A new era began for detective fiction in Turkish literature after 1990 that has lasted to date, and above all, the slogan “Good thriller is good literature” has been adopted by people. Ahmet Ümit and Osman Aysu are the prominent names in this era.