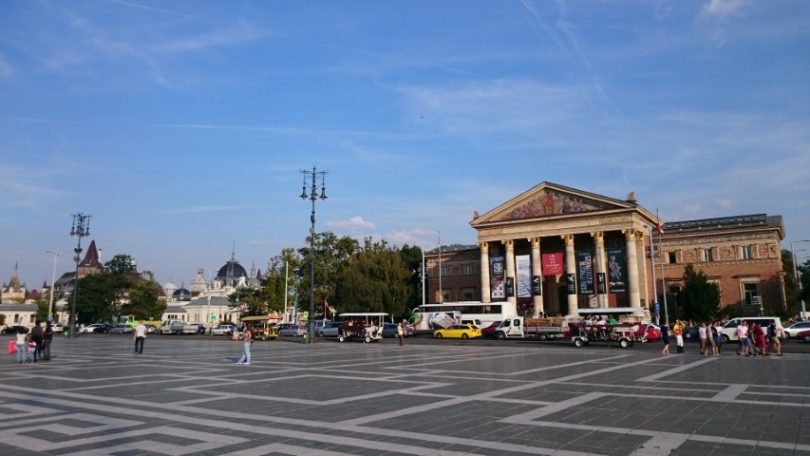 Yunus Emre Enstitüsü students who learn Turkish or improve their skills, contribute to our magazine .tr. And we publish them without editing.

Budapest is the capital of Hungary and the largest city in the country as well. It has a population of 1,7 millions but the total is 2,5 millions the surrounding suburbs included. It is an economical and political centre next to playing a major role in nation’s cultural and educational life.

Various nations lived here before Hungarians migrated to the region in the 9th century. Budapest was initially a Celtic settlement and was later ruled by the Romans. Traces of Roman rule can still be observed in Budapest. Ruins of Aquincum settlement and an amphitheatre are located in Buda. After Tartarean attack in the 13th century and 150 years of Ottoman rule, the city underwent restoration in 18th-19th centuries. Budapest developed particularly in the 19th century and Buda and Óbuda on right bank of Dunav and Pest on left bank were connected in 1873. It was one of the two capitals of Austro-Hungarian Empire next to Vienna.

Understandably tourists adore Budapest. The panorama from the world heritage Buda Castle on Dunav’s bank, sight of Dunav Bridges from Gellért Hill and Castle and view of the Parliament building, its boulevards ripe with buildings adorned with sculptures effortlessly fascinate people.

Those who like walking may begin touring the city at Heroes’ Square and the park behind Vajdahunyad Castle, and proceed through the world heritage Andrássy Boulevard among flamboyant and well-decorated buildings with shops selling fashionable clothes. Heroes’ Square where the most prominent statesmen of the country are exhibited and Vajdahunyad Castle where existing architectural styles are showcased, were built for the celebrations and exhibition organised on the occasion of the first establishment anniversary of Hungary.
If you wish to take a break from touring the city on foot, you may take the subway operating under Andrássy Boulevard, the first subway built on continental Europe after Great Britain. We recommend you visit the splendid Saint István Cathedral named after the founder and first king of Hungarian State on the other side of Andrássy Boulevard.

There was a considerable Jewish community in Budapest before the Second World War. This community initiated the construction of the largest synagogue in Europe at city centre at late 19th century. You can learn about Judaism and events of the world war in an exhibition in the Synagogue. If you get hungry while touring the city, you may stop by at one of the restaurants and pastry shops.

Buda Castle catches your eye when you reach the banks of Dunav. You may take a walk among the buildings dating back to Middle Age and 17th and 18th centuries in Castle Neighbourhood and see the works in National Gallery within the Castle and visit Budapest Museum of History. The view of Parliament Building in Pest and river from Fishermen’s Bastion before the Castle, are must-see.

If you wish to view the city from another perspective, you may take a boat from small piers on Dunav banks. In addition to mass transportation companies, there are agencies that organise boat tours. You may either visit the small towns on Dunav banks by boat or have dinner while touring the river. And shopping lovers. All sorts of clothes, both the latest fashion and traditional, spices and small souvenirs can be found on Váci Street and Vörösmarty Square.

Budapest offers activities and entertainment catering to all interests. Those who wish to relax their body and minds, may visit a thermal bath in Budapest also known as city of waters. Some baths were built during the Ottoman period and today you can still relax surrounded by ancient Ottoman walls.

If you like sports, you may rent a bicycle and tour the city on bike. In addition to numerous bike rental companies, Budapest bikes known as Bubi can be found at all central spots of the city. Art lovers never get bored in this city. Next to museums where works by world famous artists as well as Hungarian artists are exhibited, tourists may select from a wide range of theatre plays and concerts. Műcsarnok (Work Hall) next to Heroes’ Square is recommended for those who like contemporary fine arts. If you take an interest in universal fine arts, visit the Fine Arts Museum across the Square. If you are curious about Hungarian folk art, make sure to visit Ethnography Museum across the Parliament building.

City centre awaits those who want to have fun. Venues consisting of ruined buildings characteristic to Budapest and decorated with unimaginable furniture and objects, are not only dynamic during the night but also popular meeting points during the day and ideal for relaxing after a city tour.