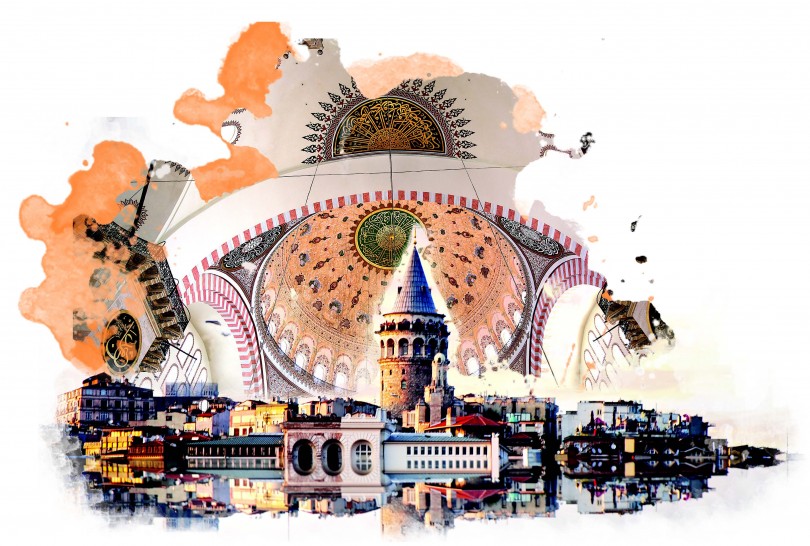 ¨Eid Festivals¨ during the days of the Old Istanbul meant exuberance. It meant tolerance, sincerity, calling upon relatives, greeting one another, and putting a smile on the children´s faces with a small gift.

The most exciting and exhilarating days during the Old Istanbul times, without a doubt, were experienced during the Ramadan Eid festival following the month of fasting. Hospitality both in the most simple homes or the luxurious residences would take place and there would be a rush in preparing delicious food, rose, apricot, cranberry, pineapple, grape, sour grape and quince jams as well as jars of pickles, halwa, and sherbets of tamarind, lemon and violets all in preparation for the eid festival. The children of the suburbs would be sent to the corner stores for the shopping and women would mostly swarm the markets and herbalists in groups.

The congregations of the men at their segregated parts of the house discussing the ¨book keeping¨ that would take place for the halwa (dessert) meetings at night, and the food preparations of the women in the lower floors and gardens were topics of discussion of the traditional lifestyle of the people of İstanbul that had spread over many years. These kinds of eid meetings used to have a pompous aspect once they were held in the residences members of¨the council of ministers¨.

During the early morning hours of eid, people would rush to the mosques to pray, then gather at homes to eat and have sumptuous communions. While during the nights of the eids, the relatives and friends would gather altogether, while the poets, singers, narrators of legends, musicians ¨make an appearance¨ and they would eat, drink and entertain themselves until the early morning hours in complete ¨self-indulgence¨. On the eve before eid, and even before it, women would prepare their delicious pastries, Turkish-style pancakes, sweet semolina desserts, sweet pastries soaked in syrup, apricots stuffed with cream and almonds, milky semolina desserts, thick fermented milk drinks with grape molasses, sultan´s turban desserts, stuffed turkeys, and trays full of baklawas. A huge shiny metal tray would be set up in the biggest room of the house, where everyone would sit cross-legged around it and the food would be eaten amongst joyful laughter and chatterings. Then, it would be time for the coffee: the intimate conversations, games, stories and tongue twisters would flow.

Some of the oldest suburbs of Istanbul were the districts where the festival would be felt with much jubilation. These suburbs were Laleli, Koska, the Aksaray Valide Mosque district, Beyazıt – Çarşıkapı. The earth would practically move during the horse acrobat shows at the Bosco circus that would be set up in Gedikpaşa. During these days, the most popular places in town would be swarmed by people and the children who were brought to these festival venues and tents. The magicians, mermaids, merry-go-rounds, barrows and small ponies dressed colourfully would give short tours to little children in their new clothes, while entertaining the elders at the same time.

While narrating all of these, I could not help but travel back to those days that have been engraved within the corners of my memory as beautiful and sincere festival days. When we used to go out into the streets with our newest clothes, and arrive at the festival areas, we would feel as though we were travelling to another world. We would feel proud, and our hearts and spirits used to be filled with complete joy. Our father used to take me and my other siblings to a store located in Sirkeci – Sultanhamamı, where we would buy our ¨spick and span¨ outfits. We used to love the suits and felt like ¨grown-up men¨ in them. And with our ¨latest fashion¨ leather shoes – I can still remember their smell – we would head off back home with great happiness. During those days in Fatih, there used to be empty yards left behind from old fires or houses in ruins, surrounding the great social complex (qulliyah). Cheap and simple, makeshift game tools would be set up in these yards as ¨portable festival venues¨ and would be removed once the festival would come to an end. Our favourite was the boat-shaped swings. We would push its limits, competing with one another to see which one of us would reach the highest. The ferris wheels, slides, teeterboards in these small yards used to seem like massive fun fairs.

In the outer yard of the Fatih Mosque, there was a tall, grumpy man with a cowboy hat, who would let us rent his tricycles for 25 kurus. We used to tour the huge yard with those tiny tricycles.We never wanted to get off. For us, they were like the latest cars. Above all, receiving a medium size two wheeler as an eid gift was something unimaginable.

Eid festivals are days that bring people together, teaching them that the only way to overcome the burdens of this world is by keeping these bonds close and to show one another that a peaceful, merciful, helpful and loving soul is above everything else. We hope that each and every day is spent like these festival days…