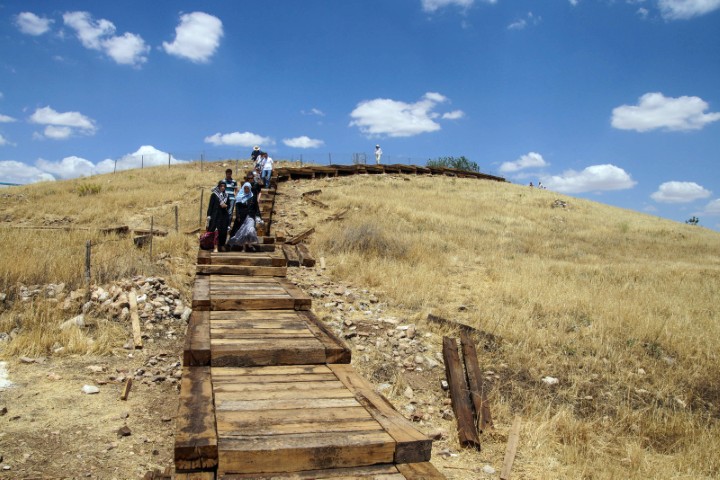 Göbekli Tepe included on the World Temporary Cultural Heritage List by UNESCO, both makes us question our knowledge of prehistoric periods and teaches us new things about history of mankind while arousing our curiosity.

Göbekli Tepe included on the World Temporary Cultural Heritage List by UNESCO, both makes us question our knowledge of prehistoric periods and teaches us new things about history of mankind while arousing our curiosity.

Anatolia has been a popular region for settlement throughout the history due to its geopolitical location and the fertile lands possessed. Humanity, on the other hand, has consistently built places of worship from past to present. Early periods of civilization are currently being rewritten with Göbekli Tepe that hosts the oldest known temple in the world. Göbekli Tepe at 22 kilometres north of Urfa, is 7 thousand years older than Stonehenge located in England, and 7,500 years older than Egyptian pyramids. This archaeological site dating back to 11,600 years ago, has shaken to their foundations scientists’ ideas on the origin of civilization since the excavations were launched in 1995, and has prompted us to reinvestigate numerous facts.

Home to the oldest temples discovered to date, Göbekli Tepe was built during the last stage of humanity’s transition to agriculture and stock breeding. Setting off from the fact that the region is ancient, the idea that agriculture led to civilization has lost validity. General view until today was that the complex societies were formed as a result of surplus of crops grown after hunter-gatherers settled. Göbekli Tepe opened this popular opinion up to discussion. Archaeologist Prof. Klaus Schmidt who led the excavations for 19 years from 1995 onwards, propounded that the chronological flow of humanity attained a history with Göbekli Tepe. According to Schmidt, the work force required to build  structures led to development of agriculture as a way of providing workers with provisions. The crowded communities had a desire to be near places of worship and as resources in the environment were insufficient to meet the needs of these communities, people were forced to engage in agriculture. In the building complex discovered at Göbekli Tepe, there was no trace of a roof and these buildings were recognized as open-air temples.

Göbekli Tepe dates back to earlier than the beginning of agriculture and even the invention of pottery. On the other hand, there is a style that can be perceived as artistic in animal figures that embellish T-shaped stones symbolizing man. On the stones are scorpion, fox, bull, snake, wild boar, lion, pike and mallard figures. Particularly lion figures prove that lions lived in Anatolia during the Neolithic period. According to some researchers, these animal figures symbolize the tribes who visited the temple. The findings at Göbekli Tepe illustrate the organizational skills which brought together crowded groups and advanced artistic skills. Symbols similar to those discovered – although smaller – can be seen in a region spanning over Northern Iraq and Syria. Based on this, it is suggested that Göbekli Tepe was a centre of cultural interaction in the Neolithic period. The fact that the temple floors were constructed in a way to prevent leakage, indicates that the liquid substances were used in ceremonies. Göbekli Tepe that overlooks and is visible from many places due to its location, was a cult centre until around 8 thousand BC. However it was covered with soil and vanished from history which impels us to vigorously ask the question “But why?” for Göbekli Tepe, even today.
GÖBEKLİ TEPE AN EXTRAORDINARY PLACE
Nabi Avcı (Minister of Culture and Tourism)

Göbekli Tepe is a revolutionary discovery in the world of archaeology. There is a discussion as to how the works discovered in digs were produced. The most popular scenario for the science world is that it was a centre of belief. However there is still no certain information on Göbekli Tepe’s function and why it was established. This is why it is intriguing. This place is beyond our knowledge. It is also a striking example to Turkey’s cultural activities.

T-SHAPED OBELISK
The symbol of the Temple

T-shaped obelisks at Göbekli Tepe reach up to a height of 5 metres and a weight of 16 tons.

Bald ibis species which can be found in Turkey (Birecik – Urfa) and Morocco today, have a population of approximately 500 individuals.

Offering a wide variety of restaurants, you may try local foods as borani, bostana and hummus as well as kebab and kibbeh in Urfa, and sip the coffee called “mırra”.

In Urfa city centre and in vendors near archaeological sites, souvenirs and decorative objects inspired by Göbekli Tepe are sold. In addition, the fine handicrafts of the past are taught in Şanlıurfa Public Education Centre and Göbekli Tepe Stone masonry Workshop.

The ground at the top of Göbekli Tepe where wishing tree is located is frequently visited. In addition, Göbekli Tepe Archaeological Site Museum in Örencik Village is open for visit everyday of the week and admission fee is 5 Lira. It is up to you to visit Urfa and see Balıklıgöl, Halil-ur-Rahman Mosque, Şanlıurfa Museum and Eyyub’s Cave.
HOW TO GO?

Turkish Airlines organizes reciprocal flights from Ankara, Istanbul, Izmir to Şanlıurfa everyday. Göbekli Tepe can easily be reached after a half-hour drive from the airport