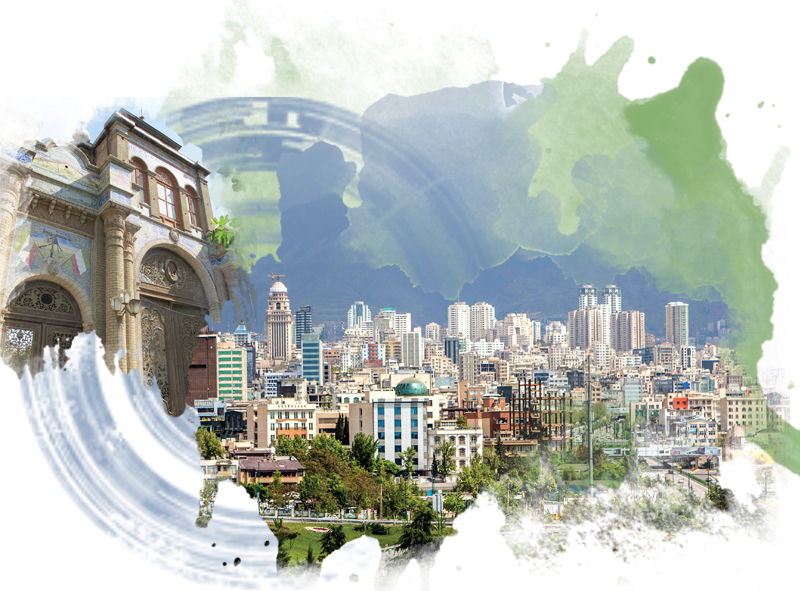 Tahran is a city that offers more interesting features. It has many layers within and is home to different worlds. The city of coves, caves, underground labyrinths is a source of inspiration.

What kind of a city is Tahran? Tiring. Closed. Dusty… That is how the city appears to the eyes of the tourist; grey and dusty. Because it has many vehicles, petrol is cheap, the colours of its buildings pale and has suffered many wars and revolutions; so much so that it gives the perception that it will take a long while for it to get back on its feet. Also, throughout the year, it is under constant threat by the clouds of dust rushing in from the deserts of Iraq. At the same time, it is full of surprises. It has many accents and the more you get to know it, it seems to grow even more. It is said that “the city of the world” is transforming into “a global city”. For some, it is a city without character as it is in a constant mode of rush in such a way that it will never be able to find a new face and style. Tahran, which used to be a small village to the North of the city of Rey, today has become a expansive city where Rey almost gets lost on its outskirts; a crowded city. Nevertheless, it seems that, despite growing desperately, it still holds onto its history with the shrinking city of Rey… And, although Rey may seem like an addition to the corner of Tahran, it turns into a mirror reflecting its growing huge grey image with its deep
history and strength. According to some foundlings, the history of the city can be traced back to the old settlement found in the town of Kaytariye, that used to exist to the north of the city. In actual fact, the history of New Tahran goes back to 1730 with the announcement of the capital city by Agha Muhammed Han Kacar. The city is known for its amazing vineyards and gardens resting against mountain ranges.
It goes back into history even further: Shah Tahmasb orders the village of Tahran with its beautiful vineyards to be protected by city walls around the year 1490. He demands that 114 towers be erected on these city walls – the significance of the number being the number of chapters in the Quran. Kerim Han Zeyd from the Zeyd Dynasty used Tahran as the capital city for four years until he chose Shiraz to be
the capital city. The population of the city at the time was only 1500 persons while today this number has reached 12 million. The North – South Segregation At first glance, Tahran stands like a city without identity, full of chaos and neglected. However, on the other side, once you take the city region by region, you are overw helmed with the feeling that there ought to be incomprehensible differences between each part as we are speaking about a city with alternative communities and underground layers. Furthermore, there is a segregation that affects the rest of the world: the north and south segregation. In a sense, this segregation is a matter enforced by nature. The city, which looks like a bowl, has mountain ranges to its north, fresh air, beautiful houses solid against earthquakes, and affluent families. Just like the north of the world. It is a city that while expanding on one side, narrows down on the other side; deep down, the blue is forced to turn into green and once you take a look at it from the outside, you witness a constant evanescence in the colour of grey and white smoke… The water channels and wide roads divide the city parallel to one another, while it is obvious that there is a balance in the distribution of park areas but the difference between the south and the north continues to protect itself. The facade of the buildings change, even those of people and the order of the display windows. It seems that it is the air that divides the city into two parts: the cool and clean air of the fairy-like world of the shahs belonging to the north, while the air pollution of the south continues to exist whether it be summer or winter.
Big roads such as Veliasr and Seriati divide the city from the north down towards the south: I had spoken of the water channels on both sides of these roads in my articles earlier. The trees, buildings, roads all enlist while Tahran and its water channels… Sometimes cities change in insidious and sometimes obvious ways. One of the many things that do not change in Tahran is the water channels that run across on the sides of the roads. The flowing waters suddenly stop you in your tracks, giving the sense of strolling by a river, with its peculiar muddy desperate outburst unique to autumn. While Watching the Water… I am lost in thought while watching the water: In which consciousness should the disconcerted voyager search for the truth of Tahran; what he sees while watching the flowing of the rushing waters or what he sees vapourising in the summer heat? Who can explain to us in complete knowledge the unchanging political agendas while the stages constantly change better than an ordinary townsman… Muhammed Esed also mentions these water channels in his book The Road to Mecca: I wonder what the Tahran resident, who is lost in thought while sitting and sadly and pensively watching the flowing water, is
thinking about… Ali Seriati had written the following about Hafiz, who had sat down to watch the river Ruknebad: “It must bring the world to the feet of the poet who never leaves the city of water channels.” The people of Tahran love to read poetry. They also witness when walking on roads surrounded by old plane trees extending from the North to the South, the transition the luxurious to the neccessary, from distance to sincerity, from speed and haste to slowness and tranquility. Harem-i Mutahhar, the grave of Ayatullah Khomeini who lived in the district of Cameran located to the north of the city due to health problems, is located on the southern outskirts of the city. It is evident that the municipality services do not make a difference between north and south; quite the contrary, they continuously build parks, cultural centres and highways to make the south a more liveable region. To some extent the city is eased with the airflow due to the expansive forests and parks. However, as the houses are heaped up above one another, hindering the airflow, the southern suburbs are more hot and congested. The Mountains… One of the most distinctive features of Tahran is the Elbruz ranges located to the north of the city. These mountains stand erect like a naked high wall to the north of the city. And when the weather is clean, the grand silhouette of the Demavend Mountain covered in snow looks like a cone. The spellbinding cone shaped mountain is the highest and volcanic peak of the Ebruz Range Mountains. These mountains, which look naked at first glance, has become the site and greenery of today’s Tahran as well as a centre of entertainment and sports for the people. The overflowing waters coming from the mountains in Derbent during the summer season has many restaurants and cafes on the side in which many residents of Tahran and foreigners visit. Similarily, there are many cafes and restaurants in the region known as Dereke where a long river flows amongst the mountains. And tens and thousands of people flow to this region either to climb the mountains or to spend some time at the cafes on fridays. The skyscrapers of the north stop the airflow from the mountains. (Once a taxi driver had told me that the mountaintops needed to be straightened in order to deal with the air pollution.) A road to the side of the Cemsidiye Park located at the northeast of Tahran is also another location withdrawing the sports lovers. There is also the biggest ski centre of Tahran in the district of Velencek that can be reached via rope cableways. This rope railway is also used to carry passengers to the other side of the mountain during the summer months in order to get some fresh air.