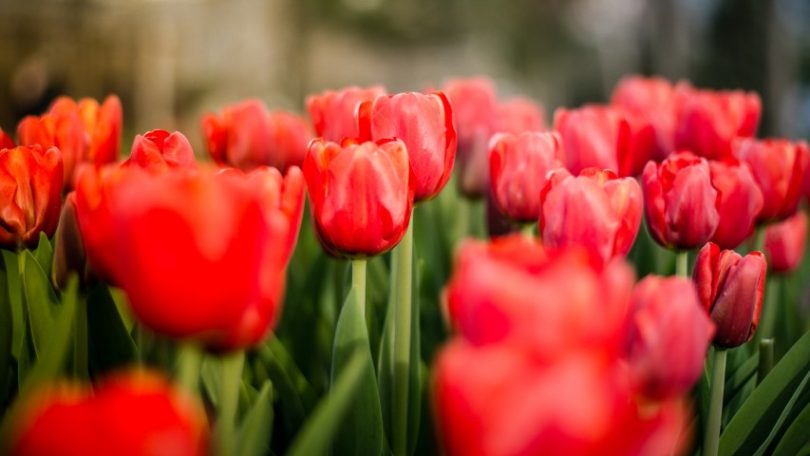 Süheyl Ünver, one of the Presidential Culture and Art Grand Prize holders, was a doctor, painter, calligrapher, illumination artist but beyond that he was a tulip lover. Here is an excerpt from the lengthy article the master wrote on tulips.

Tulip is a legendary ornamental flower of Turkey that has been a part of the oldest natural tradition for centuries. It grows in groups in fields on the mountains of Middle East and Near East. We know it for this reason. From the 12th century onwards, it has been stylized, and entered in our ornaments. In the period of Anatolian Seljuk Empire and feudal principalities, this was a subject of major importance enough to be discussed individually. In the 13th century, Mevlâna was the first poet to say verses for tulips in Anatolia. Mevlana thought of “the secret black colour in garden tulips, which appeared as a red joy from outside” and considered “the blooming as the most grievous of smiles.” Because by then, the tulip is no longer fresh and is about to fade. At the onset of the Ottoman Empire in the 14th and 15th centuries, which was a feudal principality at first, there was a secret, silent fondness that did not make it to history.

Sultan Mehmet the Conqueror who made Istanbul the capital of the Empire in 1453, at the age of 22.5, was also a sophisticated poet. The name ‘Lalezar’ (Tulip Garden) is in his Diwan. Historian of the period Dursun Bey wrote that “After the conquest, the Conqueror cared about gardens and tulips”. In the same century, Ibn Kemal, Shayk al-Islam in the period of Sultan Selim I and a scholar, had extensive knowledge on tulips and also used tulips in his similes. Speaking of wars in his famous chronicle, he likens the behaviour to vineyards, gardens and fragrant seeds. In describing a group of soldiers, he likens the soldiers wearing red scarves to tulip gardens.

COLOUR OF OUR ISTANBUL

In the 16th century, tulip was the most prevalent flower in wall tiles, completely stylized in all its flair, and came in nearly a thousand species and colours. It was deservingly mentioned in the works of poets. It has invariably been featured in frescoes, fabric and book decorations. And people also grew this beloved plant abundantly at every corner. So much that Busbecq who visited Suleiman the Magnificent with the aim of establishing peace with Austria, wrote a letter dated September 1st, 1555 in Edirne describing that he saw flowers like tulips, hyacinths and daffodils; and that they were blossoming thanks to proper weather conditions although their season had passed, and gives the following information about tulips: The odour of tulips is scarce or they are completely odourless. However their beauty and colour variety amaze people. Busbecq took it as his duty to bring tulips back home as he returned. In 1559, the first tulip grew in Ausburg, and its beautiful colour attracted attention of the statesmen and scholars.

This sophisticated envoy shows us that we, Turks care for this flower. Suleiman the Magnificent is also a poet like his father and his ancestors, the Turkish sultans. He wrote a Diwan in perfect order in which he spoke of tulips. Palace’s head muralist Karamemi mainly drew tulips as the leading motif in diwans he ornamented. Ebussuud Effendi who served as a Shaykh al-Islam for 22 years, was the primary grower of rare tulips in Istanbul in 1574 and he was also featured in flower periodicals.

There were 40 tulip bulbs in more than 10 varieties among the gifts sent to Sultan Mehmed IV by the Austrian emperor Ferdinand III in 1651, who knew him as the “Hunter” which were brought by Ambassador Smith von Scwarzenhorn. They were grown here and became famous with its name in Austria, attracting attention of enthusiasts. In 1726, Üçanbarlı Mehmet Effendi who spoke of this in his work titled Lalezar-ı İbrahim (Abraham’s Tulip Garden) says: “The colour of our Istanbul, the original ‘European’ tulip bulbs have 10 varieties, and all have been propagated from those.” Until 1717, tulips from Anatolia and Iran were grown. After that date, tulip growing became more popular. Foreign merchants introduced numerous tulip bulbs from all around the world, and a genus named “blue pearl” from Netherlands was considered among the most favoured. This tulip was grown in sultans’ palaces.

We learn from the paintings and decorations we have today that in the 16th century, Turks took interest in these exciting flowers. There is more material in this subject than can be collected. Towards the end of the 17th century, we see epistles written for tulips. In the 18th century, the number of these works exceeds a dozen. Illustrated or not, we preserve all of those in our libraries. Studies on tulips continued also in the 19th century. If we were to publish each and every one of these, volumes would be filled; we possess such abundant historical material. Our floral passion is not only limited to the tulip. In Turkish gardens, gillyflower, rose, daffodil and varieties are noteworthy as well as carnations, lilies, hyacinths and chrysanthemums.

Turkish woman deeply adore flowers. They consider it a worship to care for these in harem gardens. It is common to talk about flowers and flower folklore among themselves as is the case in history. Numerous female poets mention tulips in their poetry in fine similes. They ask riddles on tulips. The love for tulips was a connection between them. In our history, at every period, those who took interest in not only tulips but in every flower, deliberately or unintentionally established a flower, and particularly a tulip civilization.

In the 17th century, tulips were widely mentioned in the famous Sûrname by Painter Edirneli Levni. At the end of this century, Mehmed and Mevlevi Suleiman gained a reputation for paintings of tulips that grew naturally. Seyyid Mustafa of Üsküdar, Haci Dede, and famous artist and calligrapher Ali Effendi of Üsküdar, gave the tulip its exceptional place. In the 19th century, Salih and Ali Naqshbandi painted colourful tulips from shapes in their minds, which also took their well-deserved place among other ornaments. All their services were great and we still appreciate their efforts. Other than these, artists who produced important works were raised. It is possible to admire the most beautiful example to this in the dining hall of Harem Chambers in Sultan Ahmet III’s Topkapı Palace.

It can be observed that these were inspired by taller Turkish tulips that grow naturally, rather than being stylized. In the 19th century Turkish tulips became a certain motif in Turkish fabrics. In 1929, when I asked the director of Vienna Museum Dr. H. Glück how to distinguish old Turkish fabrics, he replied, “The fabrics with tulip and carnation motifs belong to the Turks without doubt,” and showed me examples. Tulips are also among primary motifs in embroideries and lace.

One of the reasons why tulip became very popular with Turks was the wealthy statesmen at important positions who took interest in history and arts. Tulip shape resembling the name of Allah written in ancient Turkish letters, word tulip being composed of these letters and adding up to 66 with abjad calculation, made tulip important in Turkish mystical culture and folklore. For this reason, this civilization of tulip that has survived in our tradition for centuries, reached its peak in the 17th  century as common people also adopted it. Tulip is admired both because it is a beautiful flower that moves the soul, and is honoured by name of Allah. Those who grow tulips for this reason, breeders, painters and writers make studies on their own accounts, while fine and virtuous poets mention tulips in their poetry.

In various libraries, periodicals about tulips and flowers were transferred to catalogues under various names. It has also been seen above that dates, names and works are related to the authors. In addition, we acquired two albums from two collectors decorated exclusively with tulips and pictures of their favourite flowers. One belongs to Mevlevi Suleiman Effendi, and the other to a flower painter named Mehmet the Painter. We see in Suleiman Effendi’s autographed album a replica of the illustrations in  three Şükûfenâme’s with identical texts in Nuruosmaniye Library. We can not give their names because they changed hands. Additionally Edirnekâri, a poetry magazine decorated with 61 flowers and bouquets, is featured in Ali Emirî Efendi Library. We have come across numerous excellent tulip and flower illustrations by artist and calligrapher Ali of Üsküdar in a poetry journal featured in Istanbul University Library. It is seen that the resources on our tulip history are abundant. We have discussed this subject by taking only a glass of water from a profound mass.