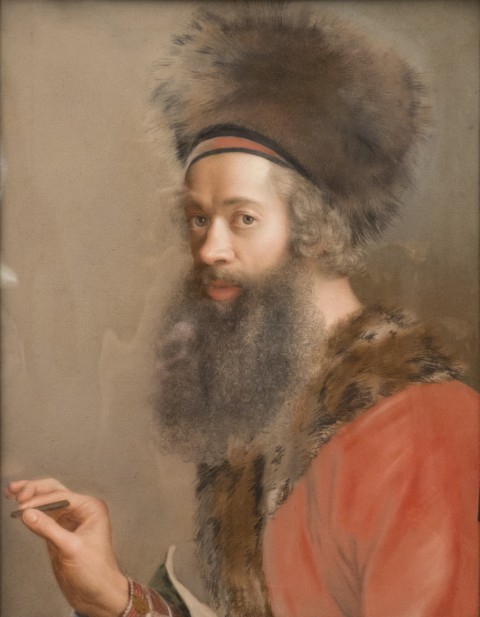 The transformation and development of trade relations following durable vessels period and subsequent geographical discoveries, made more exotic the curiosity towards Orient in the Western world especially in the post-medieval era. Turkish image and culture were invariably hot topics on the agendas of Western travellers, merchants, diplomats, clergy, scientists and most importantly the artists. Westerners belonging to these and similar classes travelled and explored various regions of the vast Ottoman lands, and aspired to learn about Turkish culture and art. While some preferred to live like a Turk comforming Turkish traditions, some adopted Islam and settled in the Ottoman lands, and began to live like a true Muslim Turk.

Over time, it became a tradition to invite painters particularly to entourages of ambassadors and to delegations sent to Orient from West. Dutch and Italian painters replaced unskilled British painters, and numerous artists from these nations were in entourages of ambassadors commissioned to East. Some of them were heavily influenced by Eastern culture, and painted Oriental glamour on their canvases for a long time. One of them is Jean-Étienne Liotard also known as “Peintre Turc” (Turkish Painter) in the West.

Jean-Étienne Liotard’s 87-years long life took start in Geneva in 1702. Liotard who took interest in painting, visited Paris especially because of his interest in miniature. After learning about the specifics of miniature art and Rococo style in Paris, he first visited Rome and then Naples. While in Naples, upon invitation of British Ambassador William Sir William Pansonby, he left Naples in 1737 and embarked on a voyage to East Mediterranean. The young artist’s first stop on this journey was the Greek Islands. Liotard then arrived in Izmir, and finally in Istanbul.

FROM NAPLES TO ISTANBUL

Liotard painted local and foreign personalities during this journey he embarked on under the auspices of British Ambassador Sir William. During his time in Izmir, he also painted daughters of foreign families in Turkish female attire who were in Turkey for diplomatic missions. The picture of Margaret Fremeaux, daughter of the İzmir consul general, is an example to this.

Liotard who arrived in Istanbul after İzmir, settled and stayed in Istanbul for four years until 1742. During the Ottoman period, foreigners in Istanbul would generally live around Pera and Galata districts. Liotard also probably lived in this area. Throughout his stay in Istanbul, he painted numerous foreigners from Europe in Turkish attire including Ambassador Sir William and his wife Lady Pansonby, diplomats, wealthy merchants, musicians and Greeks who were Ottoman citizens. Liotard also used plenty of Turkish decorative items in his paintings. He would seat his customers sometimes on a divan and sometimes on a mattress, ask them to hold a cane in their hands, and paint a Muslim city with minarets and domes in a window in the background.

Liotard made a large circle of friends in Istanbul including Turks. He began to learn Turkish. He even grew a beard and wandered in Istanbul in Ottoman attire of the period like a Turk. After returning to Europe, he dressed his models in Turkish garments such as caftan with fur collar and turban he brought with him, and painted other portraits of models in Ottoman attire. For many years, he continued to wear Turkish garments as a habit he gained in Istanbul.

REFLECTIONS ON THE CANVAS

Portrait of a vizier in a furred white kaftan and vizier’s quilted turban painted by Liotard and dated between 1740-42, is one of his most famous works. The identity of the person in the picture is disputed. Ord. Prof. Süheyl Ünver argued that Liotard met Koca Ragip Pasha when he was the Secretary of Foreign Affairs in Istanbul, and that after he returned to Europe he received the news that he became the Grand Vizier thus painted him in vizier attire. On the other hand, there is also the possibility that this person is Nişancı Hacı Şehla Ahmet Pasha who was the Grand Vizier when Liotard was in Istanbul. There are also those who say that the model has resemblance to the artist himself.

Among the Ottoman notables he painted portraits of are Defterdar Sadık Ağa and his brother Mehmed Ağa. There are Turks among the faces who posed for Jean Étienne Liotard and the interest shown in painting in the 18th year is an important sign of the distance between the Ottoman world and Europe at the same time.

Liotard left Istanbul in 1742 and from that date, he wore Turkish attire in various countries in Europe. In Vienna he visited in those years, he was admitted to the palace by the Empress and was assigned with painting portraits of the royalty. Then he travelled to Italy, England, Netherlands and France like a Turk, and popularized Turkish fashion. Students of “Ecole Française” in Rome admired Turkish fashion showcased by Liotard and one day all students dressed like Liotard, in other words like Turks. Moreover, the students of Roman French Academy organized a show during the Roman festivities, representing the Surre Regiment caravan Ottoman sultans sent to Mecca every year.

THE FINAL YEARS OF THE ARTIST

Liotard, who was 40 years old when he left Istanbul, lived another 40 years after this date. There was  enough time for him adapt to changes and novelties. Liotard, who cut off his beard and took off Turkish garments when Orient fantasies and Turkish fashion were replaced by other tastes and mentalities, abandoned using Turkish imagery in his paintings. He began to paint pictures that reflect  dressing style of aristocracy. Jean Étienne Liotard was a popular artist who painted in Rococo style when he died in Geneva in 1789. However Liotard essentially made it to art history as an artist who made Turkish fashion popular in Europe, and painted extraordinarily realistic portraits.

A painting by Liotard he completed after returning to Europe depicts a European woman and her odalisque in a Turkish bath, and is significant in revealing that he was a good observer. The woman with a kerchief around her head wears a shalwar and a bolero, and there is henna on her hands… Especially the detail of motifs on fabrics are enough to admire the artist and his paintings.

A TRAVELER ON THE CANVAS

British explorer Richard Pococke who travelled through the Middle East and Anatolia and conducted archaeological research, is one of the foreigners Liotard painted in Istanbul. Liotard portrayed the traveller leaning on a historical sarcophagus on a clear day. In addition, he dressed his customer in Turkish attire consisting of a caftan, turban and robe, and made him carry a small book with an ornamented binding, possibly the Holy Qur’an. In the background is Istanbul and a section of Kılıç Ali Pasha Mosque, and Sarayburnu in the distance.