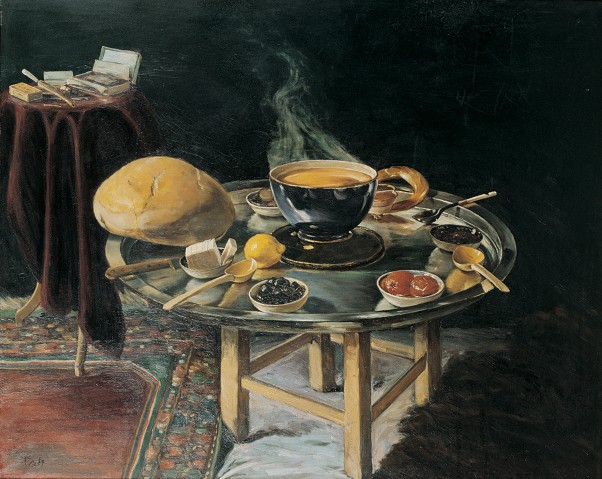 Meals and foodways of the past hold up a mirror to Turkish social and cultural history.

The earliest description of a Turkish feast dates from the 7th century and was given in a tent by the Göktürk ruler. Dishes included roast meat, rice cakes, clotted cream, sugar candy, honey and grapes. Five centuries later, when the Anatolian Turcoman ruler Melik Dânişmend married Gülnuş Banu in the early twelfth century, thousands of sheep, lambs, goats and cattle were slaughtered and 40 tons of rice and 8 tons of butter were among the ingredients used to cook food for thousands of guests. Dishes included stuffed roast lamb, roast chicken, sausages, meatballs, three varieties of soup, noodle dishes, pilaf, diverse pastries and numerous sweet dishes.

In the Ottoman period special occasions of all kinds were commemorated with food, including weddings, circumcisions, Ramazan, a child’s first day at school, the promotion of journeymen to masters at guild ceremonies and political events such as military victories and

peace settlements. Royal weddings and circumcisions were displays of pomp and power, and feasts for people of all classes were interspersed with lavish public entertainments, such as jugglers, acrobats, tightrope walkers and fireworks. Huge sugar sculptures representing gardens, buildings, a variety of animals and even chess sets were carried through the streets and then broken up and eaten by the crowd. When Sultan Abdülhamid I’s sons started school in 1784, the feast consisted of roast pigeon, fish, pilaf, okra soup, stewed fruit, saffron pudding and other deserts.

Such feasts were among the few opportunities most ordinary people had to eat meat and sweetmeats in generous quantities. In the countryside, even pastoralists who owned large flocks hardly ever slaughtered animals except on special occasions such as weddings or to honour visitors. Instead ordinary meals consisted of grain and dairy foods, vegetables and little or no meat.

One detailed description of an Ottoman banquet was recorded in 1856 by La Baronne Durand de Fontmagne, a guest at a banquet given at Topkapı Palace for the French ambassador. Unusually for such official banquets of the period, it was entirely Turkish in both eating arrangements and dishes, possibly to satisfy the curiosity of the foreign guests to experience a real Ottoman style meal:

‘They placed two tiny round single‑legged tables on the carpet, and on this a large tray, slightly embossed in the centre. On this raised part the food was placed for serving. At first there was nothing but several varieties of hors d’oeuvre and fruit. No one brought plates, bowls, glasses or jugs. There were only large spoons for soup. We all sat on soft cushions in the Turkish fashion… First they distributed gold embroidered napkins to us, a span in width, which covered the right shoulder. Then the food began to arrive. They were of great variety but little in quantity. As fast as they came, they were taken away. We barely had time to dip the tip of our spoons in them. Holding a piece of bread between our thumb and forefinger, we took stuffed vineleaves onto our spoons.’

At such grand meals as many as fifty dishes were served one by one, sweet dishes such as baklava being interspersed between every three or four savoury dishes. As Baroness Fontmagne relates, diners ate just one or two morsels of each dish and in between courses helped themselves to salads, pickles and other side dishes that remained on the table throughout the meal.

Guests sat around large dining trays made generally of copper, or silver in wealthy homes. These were placed on low collapsible stands with inlaid decoration of ivory and mother-of-pearl. Leather dining mats were spread on the floor to protect rush matting and carpets from spilt food. Each diner was given an embroidered table napkin, and spoons used for soup, pilaf and fruit compote were the only item of cutlery.

Social life consisted mainly of gatherings with family, friends and neighbours. An Ottoman gentleman and sufi, Seyyid Hasan Efendi, recorded dishes served at supper parties with his friends in a diary he kept in the 1660s. Evening gatherings called sıra gecesi (‘by turn night’), were popular in all Ottoman cities and towns, particularly during the winter season. This was a custom that originated in the Turkish homeland of Central Asia. As well as conversing, the guests recited poetry, asked riddles, played word games, and were served refreshments that almost always included helva freshly prepared by the host, hence the alternative name helva sohbeti (‘helva conversation’). The guest chosen to be next host was informed by his friends, who placed a ball of helva in front of him.

During Ramazan relatives and friends visited one another for the evening meal called iftar. Ottoman statesmen were expected to keep open house for this meal, as described by the 16th century Austrian ambassador Busbecq, who says that guests were so numerous that they had to wait for an empty place at the tables. Such generous hospitality was so costly that hosts were sometimes forced to sell off valuables such as carpets and jewellery in order to pay their bills.

Baklava was associated with Ramazan from the 15th century, and by palace tradition hundreds of trays of baklava baked by palace cooks were presented to the Janissary soldiers on the fifteenth day of Ramazan.

Ottomans loved to eat outdoors, either in their own gardens or at wooded beauty spots around towns and cities. Rich families had summer houses and arbours in their gardens, where they could eat meals and entertain their friends. According to the English traveller Fynes Moryson, the Ottomans enjoyed eating meals on grassy river banks or in gardens more than inside their houses. Women often arranged picnics with friends and relatives, who each contributed a dish they had prepared in advance.