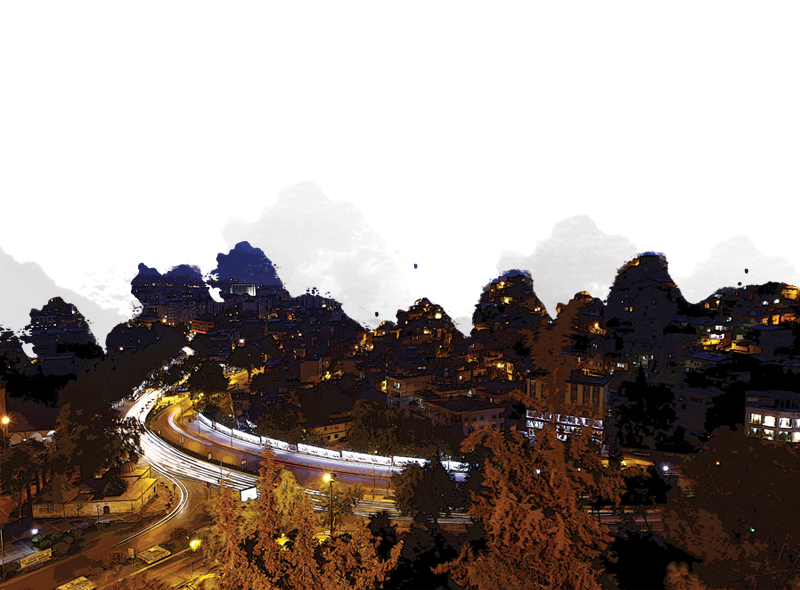 There is a question we encounter as people from Maras: How come, they ask, so many literary figures simultaneously emerge from such a small city?

One does not visit Maras by chance. One must be determined to visit Marasbecause it is not a city established on major transit routes. It has an authentic location geographically. Although it appears to be on major transit routes, this is misleading. In fact when you look at the map, Maras is neighbor to Malatya and Adıyaman due east, Kayseri and Adana due west, Sivas due north, and Gaziantep due south. Despite being situated right at the center of all these major transit routes, Maras not being on the route is an interesting fact. Established at the foot of Ahır Mountain, Maras was regarded a city fairly isolated from the world and its periphery up until a few decades ago, more precisely did not get in contact or “disdained” to get in contact with the world.
My Maras, the city I was born in, was that city detached from the world. When I say my Maras I bear in mind 1940s and 1950s, years of my childhood and early youth. And Maras of those years… With a population of 35 thousand, and a city center spanning from Pınarbası on east to Batı Park on west, from border of Arkbası wilderness on north, not reaching up to Kahramanmaras on south (today at around two kilometers north of the train station) on a limited area…

My Maras was neither on transit routes nor on railways (and it is still the case). Railway stretching along the west east axis, diverts at Narlı towards northwest and arrives at Maras train station, to stay. There is no railway beyond that point and Maras train station is the terminal station.

A city geographically so isolated from its periphery, people of Maras also remained isolated for long years, and this authentic state of isolation formed, shaped their character. In this respect, people of Maras have always had the desire to be self-sufficient, and to stand on their own feet. More precisely, the nature of the city prompted it: Let me repeat that I am talking about my Maras, the Maras of my childhood… Maras I am referring to, reached the apex of self-sufficiency in February of 1920: Maras Battle of Independence, which broke out on January 20 that year when French soldiers shot Sütçü İmam and lasted for a total of 21 days, demonstrates how this spirit of self-sufficiency became concrete. Maras fought that battle with its own locals, own gangs, and own local organization. City did not get any help from the outside. This battle was not fought to add to the myths of modern times but to obey the command of the religion, that’s all.

My Maras is basically a farming city. The character of people who farm, also permeates to my fellow people’s souls: Self-sufficiency. The primary elements of this character type are self-helping, never begging or serving someone slavishly. These people are not very successful in trade. Trade requires opening to the outside world. It requires getting in contact with neighboring cities and countries, visiting those places, purchasing and bringing goods from those places. However Maras’s geographical location did not allow it for long years. And people of Maras did not deem trade necessary. Of course small exchanges took place in the city; but even that was a manifestation of self-sufficiency and never went beyond that.

Maras was an isolated city, and considering the harsh and long winters of my Maras, one might wonder what people lived on during those seasons. People of Maras moved to summer pastries once cold season ended. These vineyards are tiny flat-lands, at 8-10, maximum 20 kilometers distance to the city center, stretching along the foot of Ahır Mountain from west to east, at altitudes around several hundred meters higher than the city center. Numerous grape varieties grow abundantly in these vineyards. And also nuts such as walnut, almond, and pistachio… People of Maras make sweet pastry and churchkhela, and şıra (fermented grape juice), enough to last all year. Using special methods, they preserve fruits like winter pear and pomegranate for winter. They dry mulberries and figs as well as apricots. All these nuts, dried fruits, specially processed foods as sweet pastry, churchkhela, and şıra allow them to spend particularly winter and almost the whole year without having to worry for their daily food. Meat sujuk (also known as ‘iriskit’’ in Maras) is made as well. And most importantly, yes, most importantly Maras’s original tarhana is prepared. This tarhana is prepared nowhere else in Turkey, therefore nowhere else in the world. Just like Maras’s ice cream, this is a unique product. Tarhana-making is a difficult and tedious task however everyone participates in this task with pleasure. The preparation process of tarhana is so long and interesting that it deserves a separate article. For example ‘şapta’ and ‘çığ’ are two instruments used in tarhana-making and nowhere else in Turkey: şapta is a pole made of poplar tree, and çığ is a type of mat woven of fine reeds. Çığ is spread over şapta, and fresh tarhana is laid over çığ to dry.

Despite its geographical location, recent years’ urbanization boom is incredible. The city of 1950s with a population of 35 thousand is nothing like the city today with a population of 350 thousand. I think that the problems which have arisen as a result of urbanization are not the subject of this article. It is a completely different issue. The aspect that concerns me is me being unable to recognize my Maras today. Although I have not been living in Maras since 1958, for more than forty years, I still visit every year even for short periods. And every time I visit, I find a new avenue, a new district under construction. And my Maras is vanishing more and more each year; it is dwindling next to Kahramanmaras currently under construction, almost turning into an old neighborhood of the new Maras. Water pumps we came across at every corner in the past have been removed, fountains and springs have dried up. Water from Pınarbaşı was once sufficient by itself for the city of 35 thousand but not anymore; so dams are being built. Dam reservoirs are formed around our city. I can say that these have fairly changed the air of Maras. I felt city’s air to be highly humid this year when I visited.

Despite extreme urbanization, Maras continues to preserve its authentic characteristics. For instance Maras meatballs: stuffed meatballs, steak tartar a la turca, bulgur salad, lentil meatballs (also known as dry meatball), sour meatballs, meatballs with yoghurt, oily meatball stew, simit meatball (simit is finely ground bulgur). And as the main course of local weddings, keşkek dish (meat and coarsely ground wheat) and courgette dish are still in demand. Karakucak wrestling games are still organized. Champion wrestlers of Maras origin have competed in world, European and Olympic games. However, in my opinion, Maras is the land of pehlivans (traditional Turkish wrestlers). I think that handcrafts such as copper work, brocading and xylography should be revived.

And not mentioning two appreciative operations by our municipality here, would be ingratitude: the boulevard built where Maras opens to Kayseri was named after Necip Fazıl Kısakürek; and another wide, new avenue in the city center is named after Cahit Zarifoğlu. One is a prominent figure of Turkish literature in Republican period and the other in contemporary Turkish literature. However poets, story writers and authors are not limited to these two names. Hayati Vasfi, Mustafa Zülkadiroğlu, Derdiçok, Âşık Memmet (Mehmet) are folk poets who immediately come to mind. And ournpoets and writers with a place in today’s literature: Nuri Pakdil, Şeref Turhan, Erdem Bayazıt, Alaeddin Özdenören, Akif İnan, İsmail Kıllıoğlu, Osman Sarı, Kadir Tanır, Bahattin Karakoç, Abdurrahim Karakoç, Şevket Yücel, Şevket Bulut, Tahsin Yücel, Kamil Aydoğan, Adnan Tekşen, Sezai Uğurlu, Bünyamin K. and tens of more names… All these names I have or have not mentioned, are in my opinion the veins that nourish today’s literature.

There is a question we encounter as people of Maras origin: How come, they ask, so many figures simultaneously emerge from such a small city? As I said, Maras is situated in an isolated geography. Locals of Maras, who do not consider opening to and extending towards outside world, dove to their own depths. Maras now wishes to become even more self-sufficient with its university. Leaps in industry were an outcome of urbanization. I construe this renewal act of Maras as the intention of integrating with the rest of Turkey in one hand and an effort to convey own culture to whole Turkey on the other. And I would like to witness a new Kahramanmaras born out of my Maras’s culture, and I see that.

*After I wrote this article, I discovered that a neighborhood was named after M. Akif İnan, an Anatolian high school after Erdem Bayazıt, a street near Doğumevi (Maternity Hospital) after Alaeddin Özdenören and the culture center after Necip Fazıl Kısakürek. There may be names of other poets and authors I have not come across yet.