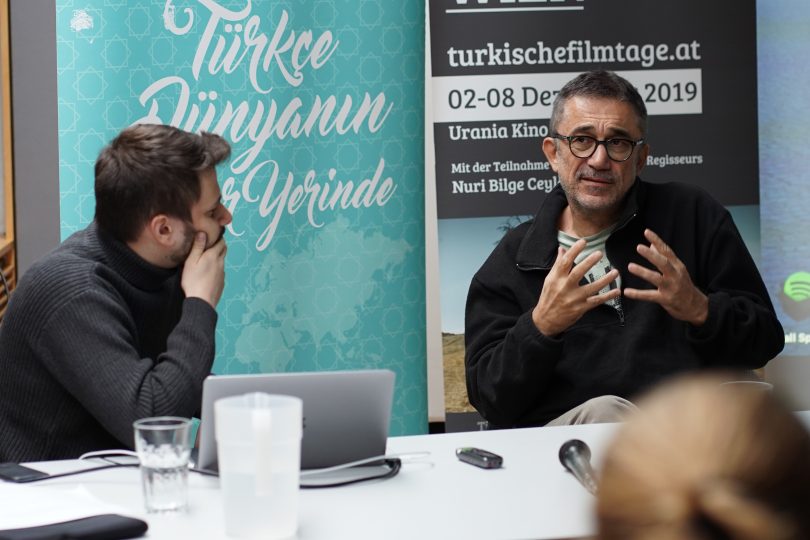 Without international film festivals, it is very difficult for a country’s cinema to open to the world. I know from personal experience that especially those festivals where selected films from Turkey are presented to masses with special titles are important. Yet, it is certainly not enough to be limited to festivals. I still remember from my childhood and youth the French films I watched at the French Cultural Center in Taksim. I used to watch a lot of movies that didn’t commercially make it to the theatres in Turkey. I still recall how I ran for Fellini films at the Italian Cultural Center in Tepebaşı although I didn’t speak a single word of Italian. Those were attended by not only young people and students but also many movie fans from different generations.

Turkey should not content itself with festivals if it wants to promote its cinema on an international scale. We need to organize mass screenings, excluding festivals, in many countries to globally introduce our films and directors. It is undoubtedly not easy to hold such events without government support. It is required to meet the audience in the right location and in the right theatre halls, go beyond merely screening movies but organize different events and look for ways to bring together moviegoers and the members of the film-making industry.

Held in Vienna, Austria on 2-8 December by Yunus Emre Institute under the support of Ministry of Culture and Tourism’s General Directorate of Motion Pictures, the Turkish Films Week in Vienna (Türkische Filmtage Wien) was exactly such a well-thought and designed event. The Viennese movie fans had the opportunity to not only see Nuri Bilge Ceylan’s films such as “Once Upon a Time in Anatolia”, “Winter Sleep” and “The Wild Pear Tree” but also meet the director in person. On Friday, December 6th at noon, Ceylan met young cinema students at the Vienna Film Academy.

The hall was so full that some students had to sit on the floor. It was clear that all the students who asked questions knew Nuri Bilge Ceylan’s movies and cinematography very well. The curiosity of students as well as their desire to learn was remarkable. They didn’t really ask many questions about the content of his movies and the stories or characters in there. They knew Nuri Bilge Ceylan cinema very well and just wanted to learn how he worked. Therefore, questions focused on style, technique and methods of work. Soon the session turned into a real masterclass. The attention and respect for Ceylan marked a proud moment for our cinema.

Starting from his very first responses, Ceylan underlined that, in his films, he did not take ready-made prescriptions or predetermined ideas as a starting point. He wasn’t coming to the movie set as a director who had completed shooting the film in his mind based on a finished scenario. He saw the set as a process of discovery to develop characters and create the mise-en-scène. He told that he was not easily satisfied at the set, that he was trying to get the best performance from the cast as much as the working time allowed and turned to different alternatives. He even told the students, “If you are very confident in the set and there is no doubt in your mind, then there is a problem.”

The questions mostly focused on the shooting process. Ceylan explained in detail the methodology he pursued in managing the actors and actresses. He added that he found desktop rehearsals before the shooting useless, that he took advantage of improvisation to a certain extent but never received very satisfactory results from improvisations.

Meanwhile, students were persistently asking how he decided on shooting angles and wondering at what stages he carried out the photography design process. Ceylan said he didn’t use storyboards but decided on the angles at the set. So, how long was he taking to determine the camera angles? Obviously, they wanted to learn about the working method of Ceylan, who has a global reputation for his visual mastery and great frames. Realizing that questions mainly focused on the same topic, Ceylan said, “Placing the camera and deciding on the angles are obviously the easiest parts for me. I also often look for the most practical, fastest solution regarding images, color and light. I devote most of my energy on the set to actors and actresses, and I deal with them for most of the shooting.”

Ceylan said he wanted to work with smaller crew at the set to keep dynamism and practicality at shooting phase and that he planned to build a small set crew for his new film. The interview at the Vienna Film Academy was enlightening and useful for me to have an idea of Nuri Bilge Ceylan’s working methods and approach. During our face-to-face conversation after the session, he said he had no interest in movies that made “predictable” statements. Making films was a discovery process for him, from writing the screenplay to the final stage of post-production. Obviously, he wanted the same discovery process for the audience to last until the final scene of the film.

On the evening of the same day, Ceylan answered questions from the audience after the screening of his film “The Wild Pear Tree” at Urania, one of Vienna’s leading movie theaters. The film had sold out four days in advance. The screening took 3 hours and 15 minutes, after which there was an almost 80-minute-long Q&A session attended by about 90 percent of the viewers. Ceylan sincerely answered all questions. He continued to answer questions patiently without offending the audience that brought up the issues that he had already sufficiently discussed in detail or repeating himself.

I knew he was exhausted after the Q&A session at the Vienna Film Academy, but he always tried to give the most accurate and comprehensive answer without putting off anyone. In fact, had it been up to the audience, the session could have taken even longer. Hands were ceaselessly raised and questions were asked one after another. Finally, upon the moderator’s warning, the session ended with applause before it went much beyond the time period set.

During the session, some members of the audience asked questions in Turkish. Unlike the session at the Vienna Film Academy, characters, the story and the film itself were the focus. Technical questions were posed as well. Ceylan’s answer to a question about editing at a later point in the session was memorable. He said he didn’t much like cutting off scenes and said: “Editing is the cinema per se. But shooting without editing is life.” Obviously, in his opinion, a scene less edited was a scene with stronger connections to life and reality. Viennese moviegoers were fortunate to have, in person, Nuri Bilge Ceylan, who is known to not like giving interviews or appearing in front of people and addressing them or answering their questions.

During the Vienna Film Week, Nuri Bilge Ceylan and his films received great attention. Undoubtedly, there were other films on the program. Lütfi Akad’s 1968 classic “My Hostess Love”, Tayfun Pirselimoğlu’s “Sideway”, Ahmet Boyacıoğlu’s “The Scent of Money”, Banu Sıvacı’s “The Pigeon”, Fikret Reyhan’s “Yellow Heat” and Mahmut Fazıl Coşkun’s “The Announcement” were also screened. These were the films I suggested to all movie enthusiasts I had the opportunity to chat with in Vienna. Throughout the week, short films as well as documentaries were also screened at Yunus Emre Turkish Cultural Center in Vienna.

It is clear that similar events should be held in the process of opening Turkish cinema to the entire world. Founded in 2009 and operating in 58 cultural centers abroad including Vienna, Yunus Emre Institute aims to hold such events from the last 10 years in more countries in the future.

It was really fun to join them at such an event in Vienna, which was enjoying the excitement of Christmas, and witness the great attention Nuri Bilge Ceylan received from students and movie enthusiasts. I wish all the best for them. I hope they will continue to hold similar events with new films and different film-makers in different cities around the world.

*Columnist at Habertürk daily newspaper. The Author’s column of December 10, 2019 published in Habertürk was used upon his permission.