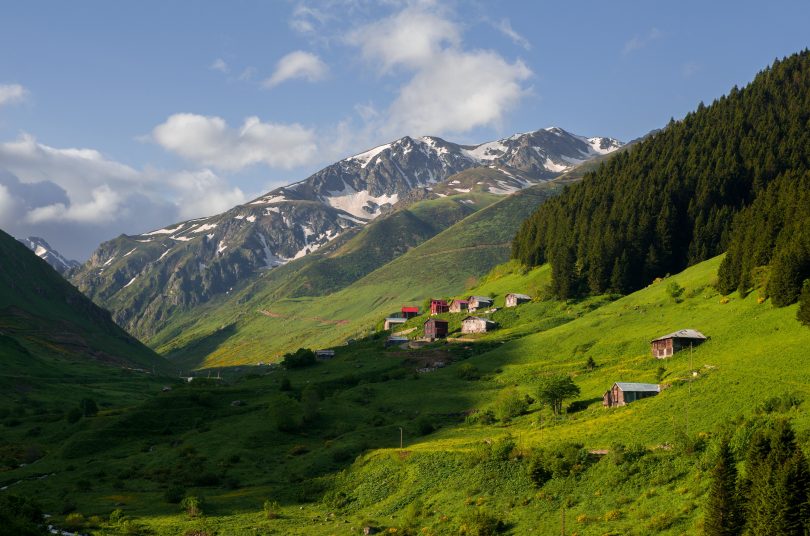 DISCOVERING THE UPLANDS OF THE EASTERN BLACK SEA REGION, WHERE TIME IS OFTEN INTERRUPTED BY A SUDDEN FOG OR THE SCREECH OF A SPARROW HAWK, IS, IN FACT, MEETING THE MOST BEAUTIFUL FACE OF NATURE.

Our portal to the Uplands of the Eastern Black Sea Region, Trabzon’s Maçka district, which is surrounded by verdant forests. The waters of Coşandere dividing the district, which offers a novel surprise at each pace from uplands to Medieval monasteries, traditional flavours and colourful festivals, point at the Sumela Monastery. The rice pudding of Hamsiköy on the road that becomes more and more beautiful as it approaches the Zigana Valley and goes through the mountains is famous. Uzungöl, Şolma, Lişer, Sera Golü, Mavura, Kiraz, Lapazan, Çakırgöl, Çatma Oba, Düzköy, Karadağ, Hıdırnebi, Kuruçam and Sis Dağı are some of the Eastern Black Sea Region uplands that are dispersed like emeralds across the region.

Yağmurdere Valley, which is reached by passing through the Salmankeş Pass on the Torul-Gümüşhane-Yayladere route that leads to the less-known treasures of the area, is among the less accessible points of the region. The Dumanlı Town that is skirted by the Yanbolu Stream was once the centre of seven non-Muslim villages founded with the name Santa. But first we must warn you. The oxygen-laden mountain air will soon whet your appetite… At those moments the delicious flavours of the regional cuisine will come to your rescue. Be sure that tasty Black Sea foot such as kale soup, kuymak, kaygana with anchovies, braised pickles, minci cheese, the blackberry syrup known as “fikoki”, and village rice pudding cooked in an earthen bowl will cause you to love the region. Adding colour to your trip by reaching out to the uplands of Trabzon’s neighbour Giresun is up to you… Kümbet is only one of Giresun’s favoured uplands… The Karagöl Upland in the vicinity of the Dereli district is known for its ponds. The Melikli Obası and Kulakkaya Uplands are approximately one hour’s distance to the city centre. After a panoramic tour of Giresun, we turn to Rize, which brings the Uplands of the Eastern Black Sea Region their real fame. The road starting from the coast of İyidere stretches towards the İkizdere Valley through endless tea and corn fields. The 150 years old wooden mosques of the Güneyce village on the road were made by carving chestnut trees like lace. İkizdere, which lends the valley its name, rises at the point where the Köhçer and Cimil streams intersect.

In addition to the Manle Waterfalls and the Vane Hot Baths, the district has a colourful marketplace. The hand-woven headdress with maroon patterns worn by women of the region, aprons dyed with madder, woolen socks, village cheeses, tea, wooden butter churns and bookstands are among the favourite articles of the marketplace.

Dereköy to the south of the district marks the entrance to the İkizdere Uplands. Along with Anzer Upland, which is famous for its honey, the Çamlık, Puşula, Gölyayla, Cimil, Çiçekli, Mahura, Yatak, Buzluğan, Kaban and Vaşa Uplands are also located there. For trips around the region, it might be a good idea to base oneself in the Çamlık Upland where accommodation, food and guidance services are offered. One of Turkey’s two highest mountain passes with an altitude of 2 thousand 600 metres, the Ovit Summit is crowned by a glacial lake known as Aygır Lake.

On the Road to Hemşin

The road leading to Çamlıhemşin passes through dazzling greenery. The Hemşin Basin created by the Fırtına Stream is among the places where you can best feel the Black Sea Region’s steep nature divided by valleys. Surrounded by the highest mountains of the Eastern Black Sea Region, the basin has around 50 uplands and more than 70 mountain villages. The settlement of the region features neighbourhoods consisting in some cases merely of a few houses that are isolated due to being dispersed across steep and foggy slopes. The real surprised offered by Çamlıhemşin is the Konaklar Neighbourhood, where the most flamboyant houses of the Black Sea Region are seen. The most recent of the approximately 20 mansions built on a steep sloped lost in forests and fog is over a hundred years old. The interior spaces of the buildings that present a flawless synthesis of cut stone and wood, which are decorated with antiques, porcelain tile stoves and rare glasswork, reflect the taste of the houseowners of the valley. Our voyage over the clouds continues with the Çatköy-Verçenik route. This verdant valley with its arched stone bridges, country restaurants, mysterious monasteries, and small cable cars carrying provisions to houses climbs towards the Black Sea uplands in the heart of the Kaçkar range of mountains. Closest to the Stars…

Deep in the Fırtana Valley, Zilkale, which rises in the middle of a wild canyon, has a mysterious and romantic appearance. This place is also the entrance to the Kaçkar Mountains National Park. The nature park stretching across an area of 51 thousand 550 hectares is a paradise for trekkers with more than 230 species of birds, and around 2 thousand 300 species of living beings, 550 of which are endemic. The high sections and dense pine forests of the mountain road that becomes steeper as one approaches the Kaçkar range of mountains give way to large meadows and upland flowers. The road branching in Çatköy at the skirts of the Tatos (Wish) Mountain stretches to the Elevit, Trovit, Palovit, Amlakit, Kavron, Hazindağ and Samistal Uplands on one side, while the left hand road leads to the Hisarcık, Çiçekli, Orta, Baş and Hacıvanak Uplands. The Kito Upland that offers a bird’s eye view of the Fırtına Valley from the slopes of Çatköy is among the most beautiful surprises of the region. Famous for the Balıklı Lake and its gurgling springs, Kito has no concrete buildings, but only wooden upland houses. This wild upland that rests on the cotton candy lap of the clouds will take you to another world…

Under a Green Umbrella

A tour of the Eastern Black Sea Region Uplands in which Artvin is not included would definitely be incomplete. Having taken shelter in the untouched nature of the Kaçkar Mountains, Artvin is a far corners of the Eastern Black Sea Region, which is full of surprises with its upland festivals, historical Georgian churches and nature sports facilities. The Kafkasör Upland, referred to as the “Green Umbrella”, is known for camel wrestling. The slopes of the Genya Mountain against which Kafkasör leans conceals unmatched tracks for off-road enthusiasts with its high-adrenalin mountain roads hugging the falls. The Hatila Valley to the west of the mountain contains Artvin’s largest national park. In the region that offers rich opportunities for mountaineering, rock-climbing, trekking and jeep safaris, the section of the Çoruh river remaining between Yusufeli and İspir is among Turkey’s best rafting tracks. The mild breeze that rises towards the evening on the Uplands of the Eastern Black Sea Region also brings with it the sounds of an energetic horon… And the notes of the tulum and the kemençe, which turn into a musical feast in the hands of the people of the uplands in love with the mountains, beckon all travellers to the Black Sea Region…

One of Anatolia’s points with the highest oxygen ratio, the İkizdere Valley is a paradise for trekkers with around 200 bird species, over 2 thousand living beings, 500 of which are rare, and walking tracks that would last one months. The mountainous areas of the region, which is one of the most important habitats in Anatolia of the chamois and the Caucasian black grouse, is an attractive place for nature observers. Crystal rocks where the marks of a glacial epoch are visible, glacial lakes, “U”-cross-section valleys and unthawed glacier masses can be seen at the points of the mountains with an altitude higher than 2 thousand 800 metres. The sections under this altitude are covered with verdant forests.

You must be prepared for long walks on trips to the Uplands of the Eastern Black Sea Region. Taking into account that you may take long walks in the country, waterproof boots protecting your ankles against sprains, a raincoat and a pair of comfortable trousers will be your best friends. It is very important for safety reasons that youare accompanied by a professional guide or someone who knows the region very well. It would be useful to pack drugs and a first-aid kit against small injuries, colds and an upset stomach. The Pole of Anatolia

A page-by-page literature scan that lasted almost two years, and discoveries by experts of the subject resulted in a culture inventory of the eight cities of the Eastern Black Sea Region. The Black Sea Region Culture Inventory was divided into the headings “immovable cultural assets”, “natural assets”, “folk culture” and “museums”. Anatolia’s pole with cultural treasures accumulated in thousands of years, the Black Sea region has always been a coveted land due to history’s testimonyand nature’s bounty. This magnificent geography shaped by peevish winds pacified at heights of thousands of metres is home to thousands of treasures… Therefore, the Black Sea Region has been a capital at times, a sanjak, and a holiday resort. All natural and cultural assets of the Black Sea Region, which is known for its multicultural structure, its historical treasures of thousands of years, and its legendary nature, have become traceable thanks to the culture inventory. This project will bring an important added value to tourism with its contribution to ensuring sustainability. The Black Sea Region Culture Inventory work coveringthe cities of Artvin, Bayburt, Giresun, Gümüşhane, Ordu, Rize, Samsun and Trabzon within the scope of the DOKAP (Eastern Black Sea Region Project) was completed after research, identification, documenting (visual, audial, printed), database processing and reporting processes with contributions by specialised academics and scientists.

A detailed literature study covering eight provinces and 99 districts located on an area of 48 thousand 256 square metres with a total population of 4 million 26 thousand 821 according to official figures was examined by specialists of all subjects it covers. Within the scope of the project that was carried out by travelling over 70 thousand kilometres, a culture inventory of such detail was created for the first time in Turkey with the addition of more than 320 thousand photographs and over 42 thousand minutes of 4K video recordings as well as 300 360-degree videos and 250 360-degree photographs. It is expected that the results make important contributions to the region’s tourism.