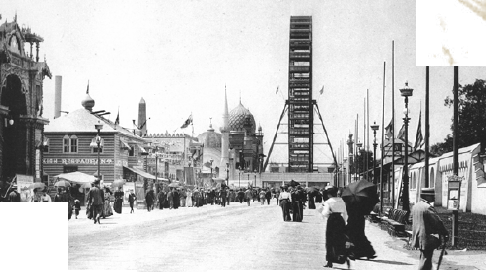 The Ottomans were not indifferent to modern global developments and made an appearance in 1893 Chicago Fair with local and national products.

Organizations such as exhibitions and fairs were initially held in the mid-19th century in various regions of the world. The fairs organized in London in 1851 and 1862; in New York in 1853; and in Paris in 1855 attracted intense interest around the world. The Ottomans did not remain indifferent to these exhibitions, and even Sultan Abdulaziz attended the Paris Fair held in 1867. The Ottomans participated in these international fairs in Europe, and organized international fairs in Istanbul in 1863 and 1894. However, the fair in 1894 was cancelled due to the loss of life and property following the earthquake in Istanbul.

TURKISH VILLAGE IN THE FAIR

In 1893, a fair was organized in America. This fair with the largest participation and highest number of visitors in the 19th century, was held in Chicago in 1492 to celebrate the 400th anniversary of Christopher Columbus’ discovery of the American continent. There was intense participation from numerous countries of the world. The Ottomans, one of the countries that participated in this exhibition in 1893; set up a large fairground to observe the quality, variety and prices of produced goods, to earn competitive power to its economy, to introduce quality Turkish goods and products to the world, and particularly to promote Ottoman image to Europe. In the fairground called “Turkish Village” there was a small-scaled replica of the Süleymaniye Mosque, a replica of the obelisk in Sultanahmet, a hippodrome to display pure-bred Arab horses resembling the hippodrome in Sultanahmet, a theatre building with a capacity of one thousand, recreational areas as well as shops opened by tradesmen from the Ottoman lands. The opening of Turkish Village and market was superb. Mosque’s minaret and the fairground were illuminated with lampions, and Ottoman flags and arms were hung. An arch decorated with Ottoman and American flags was built and visitors were welcomed with Hamidiye Anthem. A large scale signature of Sultan Abdulhamid II Khan also took its place. In the middle of the ground where Ottoman exhibitions were located, a pavilion inspired by the Ahmed III Fountain, with a small dome at its corners and a large dome in the middle, was built. There was also a Ottoman restaurant in the centre of Turkish Village called Istanbul Street.

LOCAL AND NATIONAL PRODUCTS ON DISPLAY

The exhibition was an important occasion for the Ottomans to display local and national products. In Ottoman markets, there were red broadcloths with crescent-star embroideries on the stalls, produced in Feshane. Fabrics from Hereke famous with textiles, Uşak carpets, Damascus curtains and silk fabrics on the ceilings were also  exhibited. Mother-of-pearl chairs, miniatures, and calligraphy panels adorned the walls. Ottoman women dressed in local costumes displayed everyday attire, handmade goods and jewellery. Next to women, a number of Ottoman citizens came to work in this exhibition. The most expensive silk fabrics and needleworks, gold and silver embroideries, jewellery sets, soaps and fragrances from Crete produced by meticulous manufacturers from all over Ottoman lands, were among interesting products in the fair. In addition, the famous Turkish painter Osman Hamdi Bey’s painting At the Mosque Gate was also exhibited. A work Abdulhamid II made using wood carving technique and wool, cotton, silk, rice and poppy samples brought from Anatolia were also displayed.

TURKISH TRACES THAT MARKED THE FAIR

While hand-made goods and countries’ products, that stood out in their respective fields were in the forefront, the case was different in Turkish stands where pictures from Abdulhamid II’s private photography collection of 30000 were also displayed. Among these were photographs of select cities on Ottoman lands, developments in the field of education and training, and military schools. This collection of Sultan was one of the most crucial sections of the fair, which attracted visitors’ attention. A hippodrome named the Ottoman Hippodrome was set up in the fair. Some of the horses that performed in the hippodrome which were raised in Ottoman country, and especially horses brought from Syria, were purchased by the Americans. This way, the spread of pure-bred Arab horses in Europe which are still bred today, began. In addition, a newspaper was published in English, Turkish and Arabic featuring news from the Ottoman lands, properties of Turkish village, and events in the exhibition. Süleyman El-Bustanî was the grant holder of this newspaper titled Illustrated Chicago Exhibition which contained a good deal of information on the Fair. The newspaper was the first Turkish periodical in the United States published in Chicago. Lady Fatma Aliye (Topuz), one of the first female writers in the Ottoman period in novel genre, was among the invited guests. Fatma Aliye did not participate in the fair however her works were included in Chicago World Women’s Library catalogue as a result of which she opened to the world. In this respect, the exhibition was the first international exhibition in which a female literary artist from the Ottoman State was represented with her works. Another important incident in the fair concerned the national days of participating countries. According to this, the countries would specify a special day and symbolically celebrate that day. Turkish delegates who visited the fair, determined the celebration day in line with Sultan’s directives. A ceremony was held on August 31st  (1876), to commemorate Abdulhamid’s ascension to the throne. On August 31st, reserved for Ottomans’ celebration day, the Ottoman mansion in the fair was decorated with flags, illuminated with gas lamps and a “Long Live Sultan” sign in the Ottoman Turkish language was placed. In this celebration, various events were organized and visitors enjoyed a special day.

The Ottomans found the opportunity to introduce the local and national products they produced to world countries in the Chicago Fair, which took place in 1893. Both the Ottomans and the sultan of the period Abdulhamid II did not remain indifferent to the global events and the isolated Ottoman state image in Europe was altered.