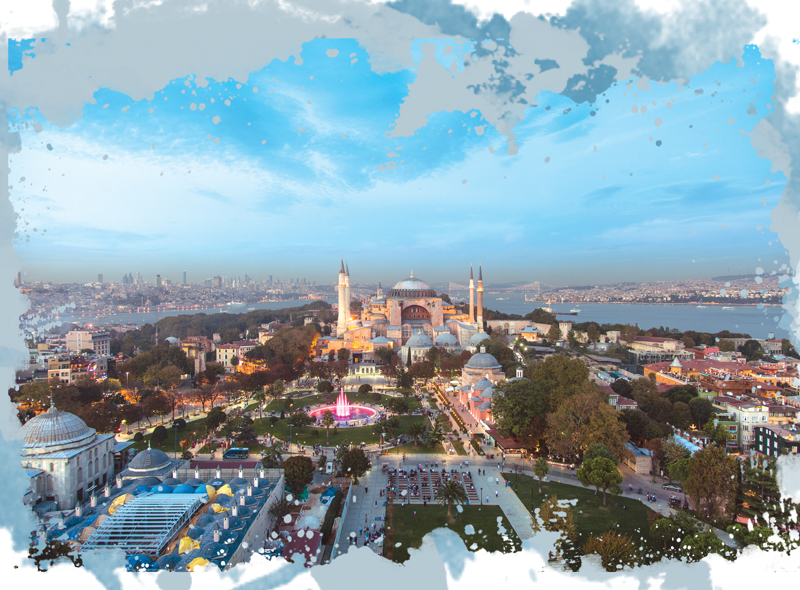 Istanbul of my childhood did not get much of its share from “regular” architecture as is the case for most cities in Anatolia. And that cannot be said even today.

We hardly ever had large boulevards as if drawn with rulers through where a dozen tanks can pass side by side, foursquare “rayons”, geometric town squares, and giant buildings looking down on us. Even imperial palaces as Topkapı, Çırağan are considerably humble compared to buildings as West Minister, Versailles, German castles I visited in following years. Comparing elegant Beylerbeyi Pavilion to breathtaking Tsarskoye Selo in St. Petersburg, it is not larger or more magnificent than Tsaritsa Elizabeta’s dressing room. We do not have a building that is a match for the spectacular block of Kazan University. Narrow, winding, even crooked streets, wooden buildings either leaning towards or moving away from each other, small mosques in the middle of small squares, masjids, fountains, nettle trees, pines, linden, Judas trees… Istanbul was this. It has certainly never been the sublime Kazan I recently visited. And I have always wondered, why?

It was almost certain the answer was not economic conditions. Ottomans who had spoken of equipping triremes with silk sails were surely not incapable of glamorizing the capital city. There was also no doubt that Ottomans knew geometry quite well. Then why both Anatolian cities which never paid attention to geometrical regularity despite being established on vast plains and Istanbul, insist on being anomalous? Why do the structures in our cities rise as if someone scattered a handful of maize on earth? Why do we build our houses on mountain slopes as if we desire to watch the plains from a distance?

Tracing this settlement style I encountered in Anatolia, almost all regions where Turkish element dominates, and in central cities, my curiosity took me all the way back to our common kin Genghis Khan and settlement view of our Central Asian ancestors. What I would like to share with you today is the their city planning approach shaped by their fascinating world views.

I take heed of city planning approach of “Blue Mongolians”, the greatest empire in the history of the world. Because I think “preservation” and “protection” are about researching, comprehending and internalizing the world views which generated these works rather than restoration of physical assets as buildings and kremlins. I believe that “sustainable preservation” should not distort and violate the “desires of architects” of physical assets in question, and respect their ideas and beliefs. It seems to me that in our world, becoming more and more monotonous each day and facing with the threat of standardization, substantive preservation should pay attention to findings of archeological astronomy, a relatively novel science.

Unrivaled Mongolian armies fooling around in the area from northeastern China to Khazar in 1200s, and later from Korea peninsula to Poland’s capital Krakow, got permission from “Tengri” (God), and entrusted their destinies to “Eternal Blue Sky”. As legend goes, Genghis Khan was born to “Blue Wolf” and “Gray Doe” who had wedded in northwestern Ulan Bator with a Mongolian wedding held on banks of Onon river springing from Khentii mountains, and Genghis Khan was born. Mongolians celebrated for nine days and nine nights, offering the God of Eternal Sky incenses, horses, and kumis. Cavalry of Blue Sky polished their spears with nine tails. As nine Uighur tribes offered their presents, nine Oghuz tribes waited for their turns. Genghis Khan knelt and groveled before holy Khentii mountain nine times.

Genghis Khan named the Empire “Blue”. Blue Empire went beyond the lands of Alexander the Great, Romans and Napoleon, stretching from Pacific Ocean to Poland, from Northern India to Russia. As long as Mongolian khans were under Eternal Blue Sky’s protection and loyal to administrative principles and ideologies of his council made up of celestial spirits, Tengri would act along noble Mongolian warriors and protect people from enemies.

This is a legend we all know with minor differences. “Sky” means “blue” in Anatolian Turkish and in Mongolian. Dome and spires of Kul Şerif Mosque being “blue” is not simply architect’s personal preference. Kukuldash Madrasa in Tashkent, Uluğ Bey Mausoleum in Samarkand, mosques in Bukhara and many more have “blue” domes as the Blue Mosque in Istanbul, Iznik tiles, wolf head on Gagauz flags are all in the color of sky which is not coincidental. “Blue” is a sacred color for Blue Mongolians’ grandchildren. In the eyes of the citizens of the empire that covered one thirdof
the world, astronomy was an official occupation. Because they believed that the law of the Empire was in hands of Eternal Blue Sky. Council scientists which were astronomers (Ottomans called astronomy “Council Science”) had to monitor Celestial Spirits’ wishes and intentions, and establish their desires.

Kublai Khan was the world leader who financed the 13th century space researches. The grandson of Genghis Khan built a chain of 26 observatories all the way to Hainan Island on eastern China which was the biggest investment made in astronomy. Relievo of the Celestial Sphere was determined in these observatories.

The goal was to plan and establish cities in a way that they perfectly reflected celestial planning. In fact, our ancestors’ örtücities were established by applying the Relievo of the Celestial Sphere to the earth. One of the best examples standing to this day is the northern capital of Blue Mongolians, Beijing. Legend has it Kublai Khan decided to strengthen the solidarity between Gods of Sun, Water, Earth and Moon by connecting their world houses with walls, and placed the square formed inside the horizontal circle*. At the same time Sun, Water, Earth and Moon Gods represent the holy directions South, North, East and West which are four corners of the world. “ God of Blue Sky’s house on earth” would be built at the center of the square or circle. Emperors of Celestial Empire were to live in this house through which Tengri “The Eternal Blue” funneled his power to earth. It is meaningful that the mansion’s gate was carved from beech. Beech is the holy life tree of Altais. It was not incidental to place this magnificent gate facing South: it was to prevent from harmful Yin influences of northern steppes, and to welcomethe generous Yang warmness of God of Sun. No metal nails were used in the construction, and its roof was covered with deep blue tiles. In this building today known as the “Greatest Palace of Harmony” Emperor of the earth Kublai Khan lived with the God of Blue Sky.

Crane symbolizes blessing and long life. Kublai Khan’s city was protected by “cranes”. This tradition was survived also in the Ottoman. 68th Janissary Troop was responsible for protection of cranes. In Household Troops’ cavalry class directly answering to Sultan, commander of 68th Troop responsible for cranes was called Turnacıbaşı (Head of Crane Keepers), and commanders of 14th, 49th, 66th and 67th troops Haseki (title given to Sultan’s sons’ mothers) Aghas. In Friday prayer parades, two would walk on right and two on left of Sultan’s horse according to seniority.

After Khan established palace’s location, it was time for empire’s senior officers and civilians mansions. First a plumb-line is hung from Sirius, the most glorious star of Canis Major cluster, the second brightest star after Sun and Moon. A hook is thrown to “Betelgeuse” and “Rigel” stars of Orion the “Tyrant- Hunter”, this way the position of left and right wing commanders’ headquarters are determined. Augira’s kid Capella’s track is dropped. They project Leo Minor’s “Regulus”, Little Dog’s “Procyon”, Taurus’s “Aldebran” ناربدلا) ) and continue with Canopus, Centaurus, Arcturus, Vega, Achernar, Hadar, Acrux, and Altair.

They mark 99 houses of 99 stars on earth. The architectural plan of Kublai Khan’s earth city becomes a facsimile of that of sky.

Another ancestor, older son of Hun Yabgu Teoman Mete is said to have married North Star, known as “The One and Only Daughter of Eternal Sky”, the super giant Polaris with two components. Legend goes “If Polaris smiled, Blue Sky would smile, if Polaris cried, Blue Sky would cry. Mete Khan impregnated North Star Polaris, and Oghuz were then related to ‘Celestial Spirits Divan’. They painted their horses blue so their Celestial bride would not find the earthly life odd and feel sad. They walked their blue horses around Polaris’ yurt, and did not let her long for constellations.”

In Anatolian Turkish, North Star is referred to as “Iron Pole” and only in our country, there are more than five “Iron Pole” hills or mountains. When Polaris gave birth to Mete Khan’s sons Day, Moon and Star, her celestial kin gave a deep blue wolf with celestial hair and mane as a present. Blue Wolf glided through yurt’s smoke hole and fell before Mete. He walked from Tungus country at Northern Korea Peninsula to Khazar, from lands of King Nyatri Tsenpo to empire of Golden Man, and led Gagauzians. When they got into trouble, he enthroned godlike Bilge (Wise) son of Gods. Horsemen of Blue Sky hailed Bilge by rising their wolf head finials cast from gold up to the sky.

As our people were occupied with these, The Brilliant Soul of Sublime and Magnificent Sky Japanese Amaterasuomikami called ‘Celestial Spirits Divan’ called “Kami” to the skies of Yamato lands, where Kyushu Island edges Honshu Island, and announced his decision of starting a dynasty on earth. ‘Celestial Spirits Divan’ were enthusiastic about the decision of Sun Goddess, stars fired meteors, aerial chrysanthemums occurred on Japanese Islands.

Aerial chrysanthemums embraced the grandson of Amaterasu-omikami, Sun’s heir Prince Ninici-No-Mikoto, and lowered him on the most paramount mountain of Kyushu Island. There he was wedded to the mortal bride from Fuji Yama Mountain, picked by Amaterasu-omikami for his grandson. Sky impregnated Earth, the first mortal Emperor of Japan Jimmu Tenno was born at Nara Basin of Honshu Island. The city Tenno was born, completely echoes Kublai Khan’s northern capital plans. Central Asia from Tibet to Uighur Basin is the land of similar myths.

Back to our day… A relatively new field of science, archeological astronomy tells us that societies in direct contact with Eternal Sky reflect their worldviews to their cities. They point that societies which attach themselves to universe/sky did not set off with the intention of conquering the nature, to externalize the power of their commanders, and did not pay attention to geometry of “regularity” in their cities. If our settlements are comprised of buildings rising on spots as if a handful of maize had been scattered randomly on earth, this is because the stars are like that too. If we build our houses on mountain slopes and look at plains from a distance, it is because mountains are holy places where immortal celestial spirits impregnated mortal human beings.

Personally when I feel overwhelmed by “regularity” which defies the values of our ancestors, my heart longs for our lost cities. One could wish that this exceptional meeting aimed at preserving Eurasian cultural heritage is extended as an interdisciplinary meeting, and involve linguists, anthropologists, archeologists, astronomers and most importantly environmental scientists.