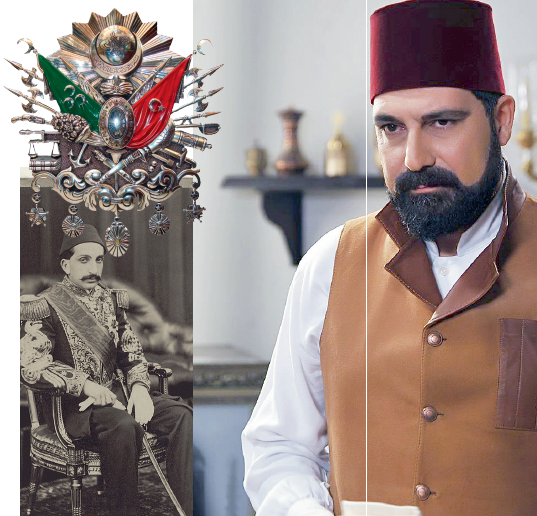 “We are not free of errors as a screenwriters group, and we meticu-lously read and interpret the reviews. We have a request from scholars and historians who follow the series. We have a great opportunity for the youth who have misinterpreted or do not remember Abdulhamid. Since the series started, we know that there is an increased interest in books written on Abdulhamid, and that many brothers and sisters re-search the sultan and his family on the web. I have been abroad for 20 days. I am also pleased to see the interest shown in Macedonia, Tunisia and Bosnia and Herzegovina. We should not miss this opportunity”
Selman Kayabaşı / Concept Consultant of Payitaht Abdulhamid Series

Payitaht Abdulhamid, TV series on the 33 years of historical struggle for the survival of the Ottoman Empire that ruled over three continents, brings Abdulhamid, also referred to as Ulu Hakan, together with the audience.

TRT1 series is about the last 13 years (1896-1909) of the reign of Abdulhamid II, the 33rd Sultan of the Ottoman Empire. The first episode commenced from the 20th year of Sultan Abdulhamids rule, was widely acclaimed by the audience. The series illustrate the period when Sultan Abdulhamid made efforts for the Ottoman region to survive through political, military and economic measures he enforced. İn the first episode of the series, the Hejaz Railway construction that was a major project by the Ottoman Empire in the 19th century, and the events during and after the construction phase are depicted. Payitaht Abdulhamid series will feature the Greco-Turkish War which ended after a long time with Ottoman victory, the First Zionist Congress with an important place in the world history, and the developments following the request of Palestinian territories from Abdulhamid and the events that followed.

The screenplay of Payitaht Abdulhamid with a strong cast and crew, is written by Osman Bodur and Uğur Uzunok. Serdar Akar behind numerous successful projects is at the directors chair. Selman Kayabaşı is the history consultant of the production that opens pages of the past. Cinematography is by Sami Say, Line Production by Özlem Taşpınar, Art Direction by Yelka İşkorkutan, Art Consultancy by Reza Hemmatirad, Costume Design by Barış Karaca, History Consultancy by Azmi Özcan, Concept Consultancy by Selman Kayabaşı, Cast Direction by Tuncay Altınoğlu, Direction of Editing by Kemalettin Osmanlı and music by Yıldıray Gürgen.

A project by ES Film with Yusuf Esenkal and Serdar Öğretici as partners, “Payitaht Abdulhamid” is filmed in Seka Film Plato in İzmit. The set was entirely renovated and transformed for the period of Abdulhamid. İn addition, certain venues such as the Yıldız Palace were reconstructed at the plato. Apart from the İzmit set, filming will continue at various historical sites such as Yıldız and Dolmabahçe Palaces and Eyüp district.

The most intriguing 33 years of the Ottoman Empire in the historical course and the last 13 years of Abdulhamid period can be viewed through the perspective of the Sultan.