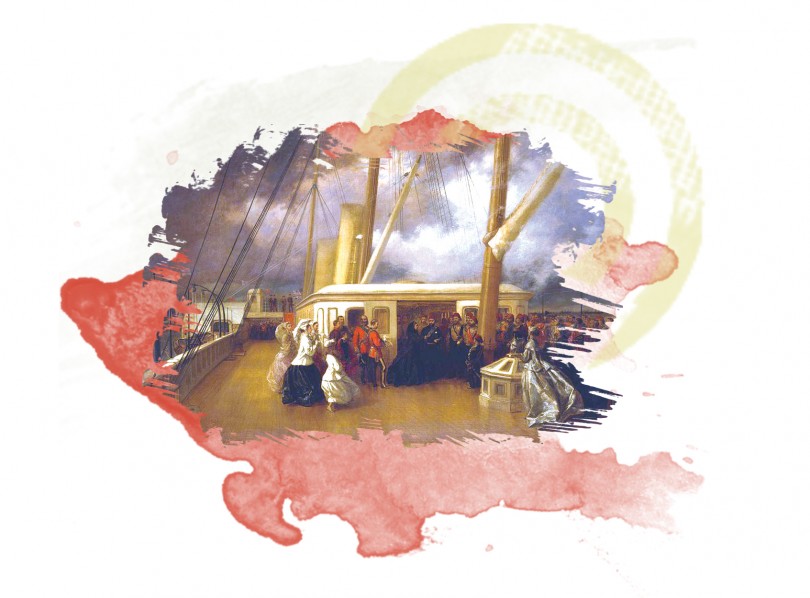 Before 1867, none of the Ottoman sultans had stepped outside the empire’s territories except for campaigns. This is why Sultan Abdülaziz’s 47 days long journey to Europe in that year, is a significant incident for Ottoman history.

Ottoman sultans had never travelled to Eastern or Western countries except for campaigns, and only a few had travelled around the empire. Moreover, it was exceptional for Ottoman sultans to go on pilgrimage. Sultan Abdülaziz’s 47 days long journey to Europe in 1867 is a major event in the Ottoman history considering the physical and spiritual journeys that did not take place due to reasons as circumstances of the period, safety, and leaving the empire without a ruler.

However there is also this. According to writer Gündüz Vassaf, Sultan Abdülaziz had never been to foreign lands. This is how: Sultan’s journey caused quite a stir among the scholars in Istanbul. Because lands ruled by the Ottoman were “Darü’l-Islam” (Abode of Peace) and ruled by the Europeans were “Darü’l- Harp” (Abode of War). And an Ottoman sultan could only travel to Darü’l- Harp to wage holy war. The issue was thoroughly discussed in the palace, and finally a solution was found. Special compartments built under sultan’s shoeswere filled with earth. So that, Sultan Abdülaziz would not step on foreignlands in the countries he visited.
Such an incident took place for one time and in the period of Sultan Abdülaziz throughout six centuries of Ottoman rule, brings about speculations regarding the motives behind the journey. The apparent reason was French Emperor Napoleon III inviting Sultan Abdülaziz to ‘International Paris Exhibition’. However due to nationalistic and
separatist movements on Ottoman lands in the Balkans, upheavals in Crete, European states approving of and encouraging these, and the relations with Russia in the period, the original motives of the journey had transformed, journey was extended and number of destinations increased.

THE JOURNEY BEGINS
After performing his Friday prayer on 21 June in Ortaköy Mosque, Sultan Abdülaziz set off from Istanbul in his
yacht Sultaniye. Sultan’s yacht was followed by Pertev Piyâle ferry, a ferry assigned to French Ambassador and a
small fleet comprised of a few battleships. The convoy reached Dardanelles Strait the next day, and was hailed with salvos of artillery fired from both sides. Sultan Abdülaziz entered the Toulon Port in France on 29 June, and was welcomed with a grand ceremony. Sultan and his entourage continued the journey by train, and arrived in Paris Lyon Terminal over Marseilles on 30 June where they were welcomed by Emperor Napoleon III. Sultan Abdülaziz stayed in Paris for the next 10 days paying official visits, and attending the opening of the exhibition he was invited to.

Sultan Abdülaziz and his entourage were bidden farewell from Paris on 10 July, arriving in Boulogne over land,
and from there sailed to Dover Port in England. Abdülaziz traveled to London by train, met with Queen Victoria,
and settled in Buckingham Palace assigned to him. Sultan Abdülaziz stayed in London for 11 days, paying and receiving official visits. He observed a military drill by British Navy, and examined shipyards, post offices and  banks. Queen presented the Sultan with a medal.

Sultan and his entourage left London on 23 July, traveled back to Dover by train, sailed to Calais Port in France by ferries, and took the private train to Vienna over Belgium and Prussia. Sultan was greeted by Belgian King Leopold II in Brussels Station, and attended a lunch given in his honor. He left Brussels in the afternoon, and arrived in Koblenz over Rhine where Sultan was welcomed by Prussian King Wilhelm I and his spouse with a ceremony. Sultan stayed in the city overnight and the convoy took the road the next day over Bavaria. Austria-Hungarian Emperor Franz Joseph welcomed the Sultan who arrived in Vienna on Sunday, 28 July. Abdülaziz spent three days here in Schönbrunn Palace assigned to him, paying official visits and making observations.

Sultan continued his journey on Danube River and arrived in Pest on 31 July. Abdülaziz was welcomed by the Hungarian notables and Danube Mayor Mithat Pasha in Pest, stayed overnight in Pest, attended the lunch given in his honor the next day. He proceeded with his journey in the evening, and arrived in Vidin over Orsova the next day. Sultan spent one night here, arrived in center of Danube Province Ruse the next day, and was welcomed by Grand
Vizier Âlî and Seraskier Interpreter Rüştü Pasha. Abdülaziz took the train from Ruse on 6 August Tuesday to Varna, rested for a few hours here and took the Sultaniye yacht that took him to France, travelled by sea and returned to Istanbul on 7 August Wednesday.

WELCOMING CEREMONY
Sultan Abdülaziz arrived in Black Sea over Danube and in Istanbul through the Bosphorus on his return journey. The
people celebrated the return of Sultan enthusiastically, and a festivity that lasted for three days and night was organized. Salutes were fired from both sides as Sultan was passing through the Bosphorus and yacht arrived off the Beşiktaş Palace as soldiers lined up along the coastline cheered “Long live the Sultan”.