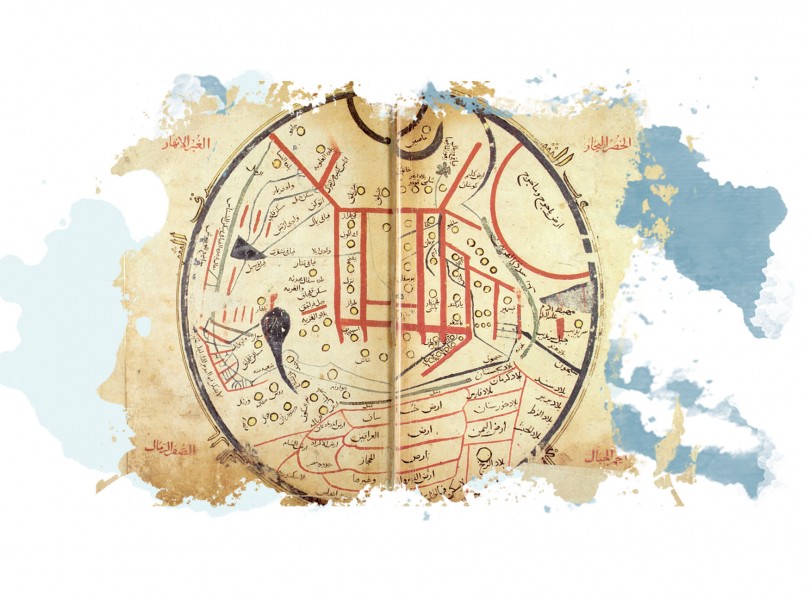 ‘Dīwān ul-Lughat al-Turk’, disappearing mysteriously after its completion in the 11th century by Mahmud al-Kashgari, was found by chance centuries later in İstanbul. That’s when all the excitement started.

Ali Amiri (1857-1924) was a regular at the used books market. Here he spent at least three days every week. As soon as he entered the market, he would start his reconnaissance, occasionally lying in ambush. Sometimes, he would set down his portable chair by the main gate, and start perusing the old books presented to him in bundles. After flicking through the faded and blackened pages of the old books, he would set aside the ones missing from his library, and send the rest to the market. Because shopkeepers knew Ali Amiri to be an honest man and believed in his passion for books, they tolerated his disposition. If the master left the market sullen, it meant, as Mithat Cemal says, he had failed to make an interesting find in the dusty shelves that day. If cheerful, it was possible to deduce that he had found another treasure.

SEEKING THE MISSING WORK
Going through the used books market one day, Ali Emiri happened upon ‘Dīwān ul-Lughat al-Turk’, the crown jewel of Turkish cultural trove penned by Mahmud al- Kashgari. Thenceforth started the most exciting days of his life. I have written about this almost fictional affair in my books ‘Book Conversations’ and ‘Culture Conversations’. By the way I have to note that this subject is studied in all its details by Instructor Rıfat Bilge of Kilis, and is serialized in 1945 in the newspaper ‘Yeni Sabah’. I present you with an excerpt of this beautiful passage to reveal the contributions a bibliophile like Ali Amiri made to our cultural world: “There was a coffee house at the start
of Karababa Street in Divanyolu called Diyarbekir Coffeehouse. Ali Amiri of Diyarbekir was one of its best customers.
Every night after dark he would arrive, sit until midnight, meet friends, converse, and then leave for his home in Parmakkapı. This man was a bachelor; he would lock his door, and unlock it himself. He devoted his life to reading. He would read works of any nature, but was preoccupied by Ottoman history the most. He had a very strong memory. He would never forget what he read. “I must have a hundred thousand Turkish verses in my head,” he used to say. I once kindly observed this. I chose a line from a random poet’s ghazal, and asked “To whom does this line belong?” He laughed: “You wish to test me; belongs to so and so, end this way, the entire ghazal reads this way…” he went on from memory. This man has dabbled much in the biographies of elders. He knows in great detail the lives of
all the Islamic rulers, all the great scholars, all Ottoman poets.”

DUST OF THE BOOKS MARKET
I’ll cut to the chase: It was 1916. One night he again visited the coffee house. After talking some history and literature, he said, “Dear Beys and Effendis! I will ask you something this night!” “Go ahead,” we said. “Have you ever seen or heard of a book by the name of ‘Dīwān ul-Lughat al-Turk’?” I answered first: “I haven’t seen the book itself, but Kâtip Çelebi saw it and wrote of it in his ‘Kashf al-ẓunūn’.” Arif Bey and his friends said, “We have seen this
name in one of the Arabic histories.” Upon this, Amiri Effendi recited Fużūlī’s line “I have inquired, not a soul has seen my beloved…” Now it was our turn to speak. We excitedly asked, all at once: “Have you?” He liked our question, laughed dryly as he does, and said, “What do you say? I own that book as of today.” We all congratulated him. We asked him how he acquired it and where it was from. “It’s a habit of mine; I go to the used books market two, three
times a week and ask the bookshops if they have anything new. I stopped by yesterday. I sat at book vendor Burhan Bey’s shop.

“Anything new?” I asked. Book vendor: “There is one, but the owner asks for 30 lira (gold coins). I’ve had it for a week. I took it to Minister of Education Emrullah Effendi thinking he can afford it. He assigned the task to his committee. The committee asked for a week for examination, and I accepted. I stopped by a week later. They offered
10 lira.’ I said, “The book is not mine, it belongs to someone else. She doesn’t agree to anything lower than 30.” In turn, they returned the book saying “We can buy a library for 30 lira. Take your book, we do not want it!” Tomorrow is the deadline we have set with the owner. I have to return the book tomorrow. Take a look, buy it if it’s of any use.”

EXCITEMENT BEGINS
When I picked up the book, I swooned. It is worth not 30, but 30 thousand liras. An unparalleled system and grammar of Turkish. I acted coy not to indulge the vendor and keep the price down. “A messy work. One wonders if it is complete. The author appears to be a Kashgari man, who is he, what does he do? Unknown. A schmo… Nevertheless, it is a piece. If the ministry offered 10, I’ll give 15,” I said. “No, as I suggested, it is not mine. I would give it if it were. However the owner strictly asks for 30 lira” he said. “Who’s the owner?” I said. In response, he said: “An old lady; one of the relatives of the former Minister of Finance Nazif Pasha (of the Vanis). The Pasha gave her the book and advised “Look, I’m giving you a book. Keep it well! When you are in dire straits, take it to the
bookshops. It will be worth 30 liras in gold, don’t go cheaper!” Well, she took the part about 30 lira to heart. She is otherwise helpless. If you intend to buy it, it would be a great favor to her.” Upon this, I said “Yes, that changes things. It is a duty to assist a lady. Okay, I accept,” and bought the book. However, right then I thought: I only have 15 lira with me, and if I am to go home, the book will remain in the shop. Suppose someone else comes, and the book
vendor shows the book to him in avarice, and he buys it. If I offer to pay the other half tomorrow, but no. I started praying to Allah: “Allah, send a friend to help me. Don’t part me from the book!” Two minutes later, an old friend, the former Instructor of Literature from the University, Faik Reşat Bey passes by. I call him at once. In secret, I said “Pray give me 20 liras if you have it”. He opened his bag, revealing 10 liras, which he gave me. “My home is right up
there, I’ll go bring it promptly.” I sat at the book shop with a relatively tranquil heart. Faik Reşat Bey showed up a few minutes later with the rest of the money. I gave the book vendor 30 liras. “Very well, no tip for me?” inquired Burhan Bey. I gave him 3 liras, and bid him goodbye. I left the shop. We left the market with Reşat Bey, talking.
But I looked behind! I feared Burhan Bey would run after us in regret. At any rate, there was nobody in sight. “O praise be to God,” I said.

I took the book, arrived home, and forgot  about eating or drinking. I spent hours in study. Dear friends, I offer you: This is not a book, it is the land of Turkistan. It is not Turkistan, it is the entire world. The Turkish language will achieve new brilliance in light of this. What the book ‘Seyyibuyihin’ is to the Arabic language, this is its sister book in the Turkish language. A book like this hasn’t circulated in the Turkish language. If I were to appraise the true value of this book, all the treasures of the world wouldn’t suffice. There is a similitude between this book and Prophet Joseph. His friends sold Joseph out for a few coins. But then he was sold for his weight in jewelry in Egypt. Burhan sold me this book for 30 liras. But I cannot give this away for several times its weight in diamonds or emeralds. Amiri Effendi was ecstatic with joy after possessing this book. He would go into raptures about the book wherever he ran
into kith and kin. The word of mouth lead all the way to Ziya Gökalp. He ran directly to Amiri, and asked to see the book. “I can’t show it right now, maybe in two months,” said Amiri, offending Ziya Bey. Then Ziya Bey sent two deputies from Diyarbekir, who too were turned down by Amiri Effendi. As for me, knowing Amiri Affendi’s disposition, I didn’t ask to see the book. I said nothing. Finally, after a week, he sent me a word one day and invited me. I went. The book was out in the open. Addressing me, he said: “Here is Dīwān ul-Lughat al-Turk. Go ahead, study it.” I took it, and looked it over. “May the Supreme Being ordain its publication,” I said.