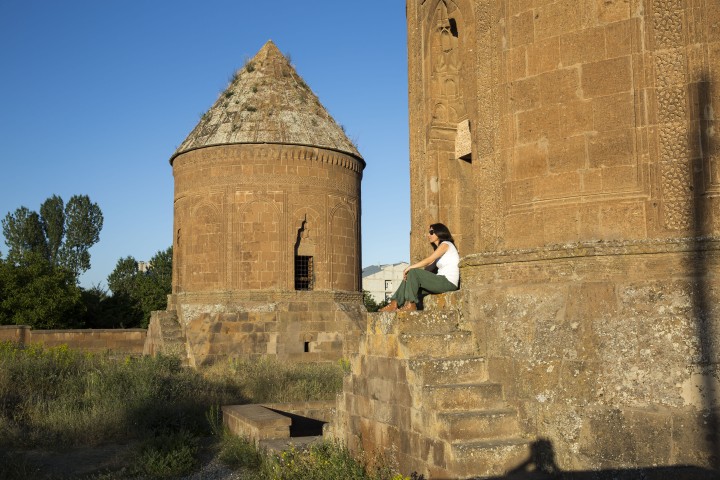 Ahlat, referred to as “The Dome of Islam” by the Seljuks, hosts Orkhon Monuments of Anatolia with massive menhirs resembling rugs made of stone

En route to Van from Bitlis, Ahlat, a naive district of Bitlis on the banks of Van Lake surrounded by Nemrut and Süphan mountains, was Turks’ entrance gate to Anatolia. This historical district has embraced numerous states and dynasties from Urartians to Ottomans due to its natural beauty and fertile lowlands. This region bears traces from all civilizations it hosted in the past; so that Seljuks called it “The Dome of Islam”, Ottomans “The City of Ancestors”, and Evliya Çelebi “The City of Oghuz Crew”. Ahlat built on a small hillside adorned with fruit orchards, offers both the blue of Van Lake on one side and snowy caps of Süphan, third highest mountain in Turkey on the other.
PITRAK

Design that fends off evil eyes and symbolizes abundance

Its deep-rooted historic identity has transformed Ahlat into an open-air museum. The centre of Old Ahlat is called Harabeşehir (Ruin-town). This is a giant open-air museum replete with castles, mosques, bridges, bathhouses and zawiyas from past civilizations and mainly from Seljuks. World’s largest Turk-Islam open-air cemetery is also located here. Tombstones that defy time and especially the vault-style tombs make Ahlat a centre of attraction. According to sources, once it was possible to see more than 100 vaults in Ahlat brought to Anatolia from Central Asia as well as the best examples built in the town. However only around 15 tombs have made it to our day. Even this number exceeds the total number of vaults in all Turkey. The most valuable Ahlat vaults built between 13th and 15th centuries are Sheik Necmeddin, Erzen Hatun, Usta Şagirt and Bayındır vaults.

There are hundreds of historic menhirs in Ahlat. Nemrut Lake Crater Lake (below). Seljuk legacies in Ahlat (page across, below).

Çağrı Bey once lodged in Ahlat and decided to make it Turkish land. Alp Arslan built his headquarters in this area and he caught his breath here before Battle of Manzikert that opened Anatolia’s doors to Turks in 1071. Soldiers who were martyred in the war were buried in Ahlat. These lands hosted Kayı Tribe for 170 years and at the same time, it was the first Ottoman settlement. Rumour has it that father of Osman Bey, founder of Ottoman State, Ertugrul Ghazi was born in Ahlat and he lived here until his twenties.

Van Lake was referred to as Ahlat Sea for centuries. Evliya Çelebi, who visited Ahlat in 1655, wrote that the fish caught in Ahlat Sea were sold to Persian merchants, and this money was used to pay the salaries of soldiers around Van. Katip Çelebi recorded it as a famous town with vineyards and orchards where apple and apricot trees were grown. Ahlat became a major trade centre in time and advancement of trade also led to advancements in art and culture. Scholars in various fields from medicine to astronomy were raised here.

Renowned Ahlat canes are made of walnut and cherry trees in the region. Walnut is especially preferred for it is a sturdy tree that is easily polished. The most typical characteristic of Ahlat canes, originally made in Central Asia and have been survived in Anatolia, are Turkish motifs engraved on them. In brief, Ahlat with the title of the first major Turkish city in Anatolia, well deserves to be visited both for its historical and natural wealth and for the rich culture and cuisine it offers to its visitors. Come on then, let’s set off for a distinct and educative journey…

Design that symbolizes the nation’s heroism and power

The best known meal in Ahlat with a rich and authentic cuisine, is Bitlis-style büryan kebab. Meatball soup called kilorik in the region, traditional keşkek dish called harise, kenger pickles and murtuğa halva are authentic delicacies. If you ever visit Ahlat, do not return before trying pearl mullet in salt.

Ahlat stone-masonry, also the source of numerous volcanic tuff structures which defy time, is still survived today in the workshops in the district. Ahlat stone found in various colours is widely used in local architecture.

If you ever visit Ahlat, make sure to stop by at Bitlis Ethnography Museum. Museum where local objects and various animations are exhibited, also features handwritten manuscripts.