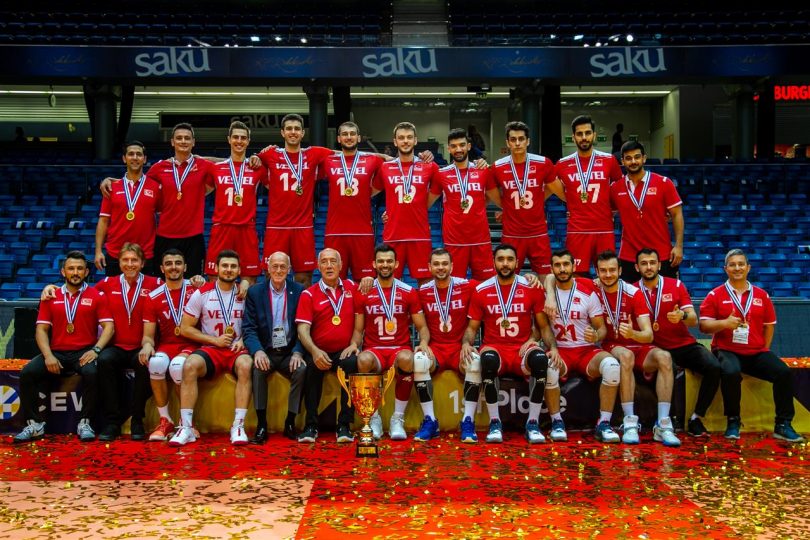 TURKISH SPORTS, WHICH HAS MADE A GREAT BREAKTHROUGH IN THE RECENT YEARS, MADE A TREMENDOUS IMPACT WHEN THE A NATIONAL MEN’S VOLLEYBALL TEAM WON THE 2019 CEV GOLD LEAGUE CHAMPIONSHIP. KNOWN AS THE “EFES OF THE NET”, THE A MEN’S VOLLEYBALL NATIONAL TEAM ACHIEVED A HISTORIC SUCCESS BY BECOMING AN UNDEFEATED CHAMPION IN THE CEV GOLD LEAGUE, WHERE IT COMPETED FOR THE SECOND TIME.

Turkish sports, which has made a great breakthrough in the recent years, made a tremendous impact when the a national men’s volleyball team won the 2019 CEV gold league championship. Known as the “Efes of the Net”, the A Men’s Volleyball National Team achieved a historic success by becoming an undefeated champion in the CEV Gold League, where it competed for the second time.

On their road to the finals, the Efes of the Net played their domestic matches before full stands in Anatolian cities such as Sivas, Malatya and Trabzon, and returned to Turkey with the Gold League Championship for the Turkish people that always stood by the team.

Turkish sports, which used to be heard through its success in individual branches such as wrestling, weightlifting and karate, showed great improvement in terms of both facilities and sportspeople thanks to the breakthrough in the recent years, which reflected in an increase in success in both individual and team sports.

Making headway in sports in 2002 upon the instructions of President of Turkey Recep Tayyip Erdoğan, who is a former sportsman himself, Turkey came a long way in the last 17 years. The progress made during the history of the Republic until 2002 in many fields from health to transportation, technology, industry, education and sports was carried much further. In terms of sports facilities, while there were 1500 sports facilities in Turkey in 2002, this figure is now 5 thousand. This does not include the facilities that are under construction and have been projected. When including municipalities and public corporations and agencies, these figures can rise to twice the amount.

The target of the government of the Republic of Turkey is to make Turkey a sports country in the medium- and long-term. The target of the Republic of Turkey is both to become a country that does sports, and to achieve success in sports in many branches. In fact, the Eleventh Development Plan, which is the first development plan of the Presidency Government System and which covers the 2019-2023 term, contains great targets with respect to sports.

A Great Breakthrough In Volleybal

The American William Morgan, who wanted to come up with a sports branch that was different from basketball, tennis, handball and baseball, invented volleyball in 1895 to enable youths to do sports. He called this new sport Mintonette, which name was changed to volleyball some time later. Turkey’s interest in volleyball, which spread across the world in a short time, started in 1919. Selim Sırrı Tarcan, who trained the first physical education teachers of the country, is the first name to establish the Turkish schools. The Turkish Volleyball Federation was founded in 1958 as the Volleyball – Handball Federation. In the adventure that started in Turkey with the world third prize won by the Football National Team, the success achieved by the basketball and volleyball national teams made the Turkish people happy. In team sports, Turkey made its mark when the A Men’e Volleyball National Team became the undefeated champion at the CEV Gold League. Among the strongest countries in European volleyball, Turkey is known for the success achieved by its men’s teams after its women’s teams. So, how was this achieved? First of all, everyone has a share in this. Sportspeople, trainers, referees, families, public corporations and agencies, the press, administrators, schools, clubs, the sports organisation, and of course the federations. The present success was achieved gradually, as a result of much sacrifice and struggle. That the government directed public corporations and agencies to sponsor sports, particularly volleyball, and that the federations achieved a strong structure and supported sports clubs started to yield their fruits.

Our A Men’s Volleyball National Team, which brought joy to Turkey, went through its first serious test at the CEV Gold European League.

Playing against Belgium, Latvia and Slovakia in Group A, our National Team achieved great success during the first week of the CEV Europe Gold League that consists of 6 legs, and, winning the 8 matches it played both in the groups and at the finals, achieved championship for the first time in its history. The A National Men’s Volleyball Team defeated Latvia 3-0 at the match played in Sivas on 26 May 2019, which was the first match of the CEV Gold League, thereby achieving its first victory. Facing Belgium on 29 May in Brussels, the Efes of the Net defeated their opponents 3-1. This time facing Slovakia in Nitra on 1 June, Turkey scored 3-0. Hosting Slovakia in Malatya on 8 June, Turkey defeated its opponent 3-0 after a comfortably played match. Playing with Belgium in Trabzon on 12 June, the crescent-and-star team defeated its opponent 3-1, by which it guaranteed being a finalist at the CEV Gold League twice over. Meeting Latvia in Riga at the 6th and final match in the group on 16 June, the Efes of the Net defeated their opponent 3-1, and rose undefeated to the finals at the CEV Europe Gold League that would be played on 21-22 June in Estonia.

They Wrote History In Estonia

The A National Men’s Volleyball Team defeated its host Estonia 3-1 at the first match at the 2019 CEV Europe Gold League Final Four, and made it to the finals. Turkey completed the first set of the match, that was played in the Estonian capital of Tallinn, 25-23, which brought it 1-0 ahead of its opponent. Although Estonia won the second set by 25-22 and equalised the score, the A National Men’s Volleyball Team won the match 3-1. The opponent of the national team at the final was Belarus, which had defeated the Netherlands 3-1. Showing an epic game at the match that was played a day later, the A Men’s National Team achieved a great success by defeating its opponent 3-0, and became undefeated European Gold League champion for the first time in its history. Turkey and Belarus, which made it to the finals, also won the right to join the FIVB Challenger Cup which will be held in Ljubljana, Slovenia.

Success Came With A Change In Generations

Turkish Volleyball Federation President Mehmet Akif Üstündağ indicated that they were proud of the national team’s success, and said that the men’s team has started to make a name in European volleyball after the women’s team. In the statement he gave, President Üstündağ said, “Our Efes achieved a very important success by becoming undefeated champion at the CEV Europe Gold League Finals held in Estonia. We effected a generation change and recruited young players. This success was achieved shortly after this change. I once more congratulate all of the players, the technical team, and everyone who has a share in this success. Hopefully this will continue. There is the FIVB Challenge Cup that will be organised in Slovenia next June, and the European Volleyball Championship. Our goal is to sustain the success we achieved at these tournaments”.

We Did Not Give Our Opponents A Break

Nedim Özbey, trainer of the A National Men’s Team, said that they did not give their opponents a break. Indicating that the people of Anatolia embraced the national team at the group lap played inTurkey, the experienced trainer said, “Filling the stands in Sivas, Malatya and Trabzon, the Turkish people created an unbelievable atmosphere. I have been serving the national team for many years, but I have never seen the like. I was really moved; I was about to burst into tears. Passing the group lap without difficulty, we did not give host Estonia and Belgium a break at the Final Four, and left as the champion. I congratulate our team and all that supported us. We have young and gifted players. They believed they could win the cup. They demonstrated an unbelievable performance”.

They ranked 4th at the FIVB Challenger Cup.

The A National Men’s Volleyball Team, which was the CEV Gold League champion, missed the bronze medal and ranked 4th after challenging competitions at the FIVB Challenger Cup held between 3-7 June in Slovenia.