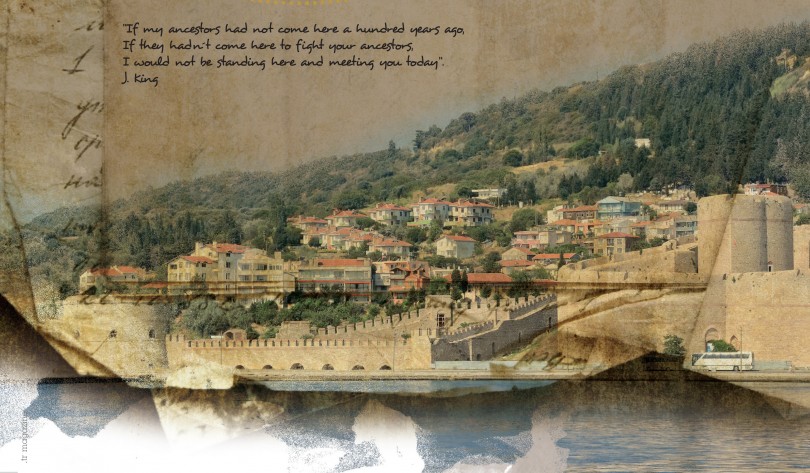 WHAT COULD POSSIBLY UNITE AUSTRALIAN HISTORIAN JONATHAN KING WITH BRITISH AUTHOR LOUIS DE BERNIÈRES IN APRIL 2015 AT GALLIPOLI AND GET THEM TO STAND BEFORE AN AUDIENCE IN THE SAME HALL?

Is it possible to state that such a long and tiring journey that began in Bursa, Çanakkale and Istanbul, is only for the purposes of promoting the books of these two authors or merely for a geographical or literary interest?
Surely, all of this is for the purposes of comprehending the past and the desire to make today a much more desirable place to live in.

The grandchildren of those, who had come to the Gallipoli Peninsula 100 years ago in the morning of April 25, 1915, may be arriving today in the tens and thousands with maps in their hands, trying to figure out who had arrived where; and perhaps by comprehending the past, they are trying to figure out the mistakes of the past. J. King and L. de Berniéres, who have both become prominent authors, are no exception to this while they stand befo-re the engraved Turkish inscription on the path to the Gallipoli Monument asking its me-aning. The translator tries his best in providing its meaning. However, to no avail; the meaning is much more than can ever be expressed:

“O Soldier, for this earth’s sake, fallen to the dust!

If your heavenly forbears kissed your brow, ‘twere just”

This war, which has brought thousands of people unknown to each other face to face and let their lives to change forever, is causing a very intricate connection between literature and history.

The maternal grandfather of L. de Berniéres had joined the war in Gallipoli and was heavily wounded. Thus, his grandmother had lost her fiancee at this war. When the author speaks of his family, whose lives had changed tremendously due to their loss, speaks of just how the lives that intercepted on these soils in 1915 had forever changed today’s world as well as the fates of people. “If this war had not taken place, nor would I have been because

my grandmother had married my grandfather after she had lost her first fiance to this war”.
L. de Berniéres, who had lived in Kayaköy close to Fethiye for a period of time to write his novel Birds Without Wings in which he describes the changes in an Anatolian village during World War I, explains how he had collected real life stories from Turkey and made observations in order to create the effective atmosphere in his book, which was published in 2004. World War I, the War of Independance and the period of change following these events had changed the lives of the village, in which both muslims and non-muslims lived together in peace under Ottoman rule. The British author, whose own ancestors had to immigrate to England from France, had also grown up listening to the experiences of his grandparents during both wars. It seems that memories can inevitably change the lives and imaginations of people today.

Another individual, who also draws his path on the pages of the past and its memories is Jonathan King, a historian/journalist from the other end of the world, Australia. In his book, Gallipoli Diaries, published in 2005, he creates a powerful atmosphere as he bases every information on true documents and on the statements of sol-diers who had directly experienced the war.

The Australian historian, who had compiled a book in which he found a diary or a letter for every day since April 1915 until December, exploring the landing from Ariburnu, also had relatives who were involved in the Gallipoli War.
In short, Dr. King states that this war “was a fatal mistake”. The message of his book is quite clear and concise: Approximately eight thousand young lives had come to die on this land, for a war in the far end of the world which they knew nothing about. They had found themselves in the midst of a war which was wrong in every sense.
According to Jonathan King, the most effective aspect of the published diaries is the fact that some of them were the last sentences of the soldiers before they left their posts and went onto the battleground to die.

Dr. King, who was successful in contacting and interviewing the last ten ANZAC soldiers, states the following: “My purpose was to ensure that another mistake like this is never lived again”.

Later on, a third author joins the group and this time isn’t from distant geographies. Demet Altınyeleklioğlu, in her novel ‘My Rose’, depicts the Gallipoli Wars from a different aspect. The love between two persons, whom the war had brought together, is depicted in a plot of the past and the present.

The land here is one which time has compiled layer on top of another layer in an astonishing manner and there is more than what meets the eye. Ernest Hemingway, who was in Turkey as a war correspondent in 1922, writes the following after he observes the withdrawal of the Greek soldiers: “This is the end of the second Troy siege.”
Although this journey begins in Bursa on April 25th, continues in Gallipoli and finally comes to an end in Istanbul on April 28th, is fitted into a four day period despite the elapsed time; it is important and unique as it has built a long bridge over our deep valleys and our pasts.

Whether the desire to look for the traces of the past and share it with the new generations comes from the inspiration of a man of literature, or comes from the untouched historical witness statements presented to us by a historian, it surely provides inspiration to the paths and futures of different worlds. L. de Berniéres is correct when he states that he still comes across pieces of sharpnels on his strolls throughout the shores of Arıburnu; God knows how many more secrets have been scattered over these shores from a hundred years ago.