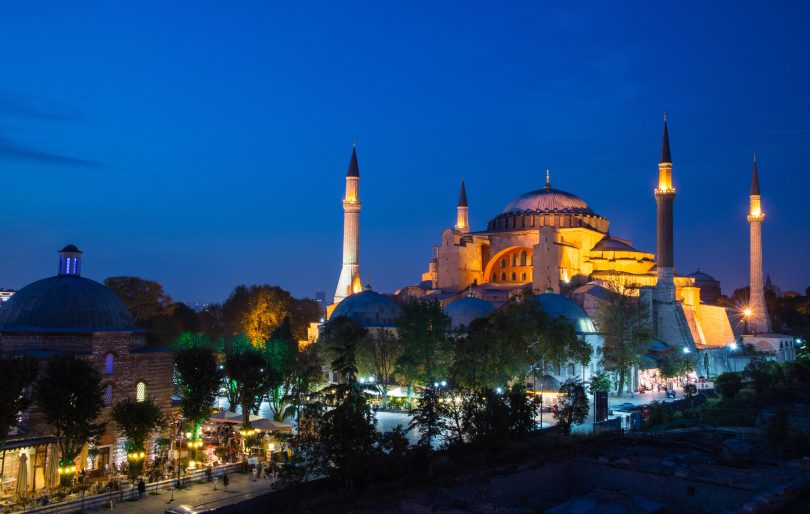 Hagia Sophia that brings together civilizations in its 1500 years of history, this time opens its doors for .tr readers. We held an interview with the Director of Hagia Sophia Hayrullah Cengiz about the mysteries of this magnificent temple.

Hagia Sophia that defies centuries, is home to artefacts from Roman, Ottoman and Anatolian civilizations. What would you like to say about such a meeting of civilizations?

The monument today is the third Hagia Sophia built on the same grounds, according to the records. The first Hagia Sophia was built in 360 BC with a basilica layout and architectural features. In 405, Hagia Sophia was rebuilt after it was burnt down during to an uprising and was reopened in 415. Justinian, perhaps one of the greatest rulers of the Eastern Roman Empire, appeared on the stage of history here. Nearly 30 thousand people lost their lives during an uprising in Istanbul in 532. As a result of this incident, the people greatly suffered. Justinian had to do something unprecedented in order to distract people from their thoughts, memories and to redirect their efforts. Emperor assigned two prominent scientists of the period, Isidoros and Anthemios, to build Hagia Sophia. There were about one hundred masters or architects under their command. Hagia Sophia gained the “fastest-built church” title in as short as five years and 10 months. Emperor had to to use ready materials for fast progress so he had material brought to Istanbul from temples, marble and stone quarries all across Anatolia. The material came from temples in Ephesus in Izmir, from Aspendos and from Baalbek in Lebanon. The works of numerous Anatolian civilizations were brought to Istanbul with these materials. This way, Justinian both unified the Eastern Roman Empire in Hagia Sophia and brought the elements of civilization to Hagia Sophia which had remained within the borders of the Eastern Roman Empire until that time. In summary, a new temple for humanity was built in Hagia Sophia. He had the greatest temple built which has stood for centuries.

Hagia Sophia is one of the most visited places not just in Turkey, but in the world. What is the average number of visitors per year? Can you share statistics about visits?

Professor Dr. Haluk Dursun said that Hagia Sophia was the largest and most important mosque in the Ottoman period; it was favoured by state protocol and for ceremonies. What are the reasons for this?

At the moment, we are restoring the main interior of Hagia Sophia. On one hand, we have completed the 98 percent of restoration of Hagia Sophia’s western facade. We will launch restoration of northern, southern, and eastern facades after completing this section. It would be a mistake to bring the restoration of such an ancient building to a halt. Despite the extensive restoration we carry out, it is a fact that a 1500-year-old building will need frequent restoration. We make efforts to complete our tasks as quickly as possible, but we do not rush. We work diligently and carefully even when we carry out the smallest task. The world is watching so we make sure to make as few mistakes as possible. For instance, we currently repair the interior surfaces of the main space in Hagia Sophia as well as the gallery floor and access ramps. In 2009, we completed the restoration of the tombs in Hagia Sophia, and restored the fountain and the library within the building immediately afterwards. 20 percent of the interior surfaces in the main gallery have already been completed. It took a little longer than we anticipated, but we will ensure to benefit from the experience we have gained from this process, and southern, eastern and western sections will be completed in a shorter period of time. Additionally, we carry out the urgent floor repairs on floor marbles and naves in the main space. We have made considerable progress in Hagia Sophia’s Gallery floor as well as in the South-western Atrium Access Ramp, and Emergency Action and Project Design of the depots. Lastly, I can say that we will soon complete the projects for Hagia Sophia’s Northern, Southern and Eastern Facades. Repairing nearly 1500 years old Hagia Sophia which has survived many earthquakes and was repaired many times, is a difficult task; however only those who work in the field know how difficult it is to make projects for such a restoration.
Have you benefited from the famous Hagia Sophia restoration in the Ottoman period by Fossati Brothers in this process?

The repair works Fossati Brothers carried out in Hagia Sophia – with all its phases- have still not been revealed. There are aspects that are appreciated as well as criticism. However I attach utmost importance to one of the aspects and I believe no one denies. Those are the illustrations by Gaspare Fossati, he made before and after the restoration of Hagia Sophia. These, as documentation, are very valuable in my opinion, and today we still benefit from these illustrations in our repairs.
One of the most important components that give Hagia Sophia its character, are the magnificent calligraphic panes. Could you to give us some information on these?

Hagia Sophia hosts eight of world’s largest calligraphic panes. Seven and a half meters wide panes, were made by Calligrapher Kadıasker Mustafa İzzet Effendi. Before that, there were calligraphic panes made by Teknecizade İbrahim Effendi in Hagia Sophia. These were either square-shaped or quadrangular, and there were six of them. These were removed, and eight replaced these. Calligraphic panes of al-Hasan and Hussein line were added. When you view the panes, you can see that the material from the wooden hoop used to the cloth, were meticulously selected. For example, you see that the wooden hoop is made of linden tree. You know that Istanbul is a very humid city, and linden is one of the least affected trees from humidity. At the same time, it is light… You hang a 7.5 meters wide pane above your head.  If you use a heavy tree, you will harm the structure, and it may fall. The cloth used is canvas. Canvas is one of the slowest wearing fabrics. We recently restored these. When Mustafa Izzet Effendi was making the panes, he chose a scale considering the size of Hagia Sophia. In addition to the calligraphic panes, the 35th verse of Nur sura is on the dome. The height of the dome from the floor is 56 meters. The master wrote the 35th verse of Nur sura at a height of 56 meters. If you think of climbing to the dome using a scaffolding these days, I can easily say that if the temperature on the ground is 30 degrees, it is above 40 degrees on the dome. People worked in such conditions, and you cannot accomplish these without love.