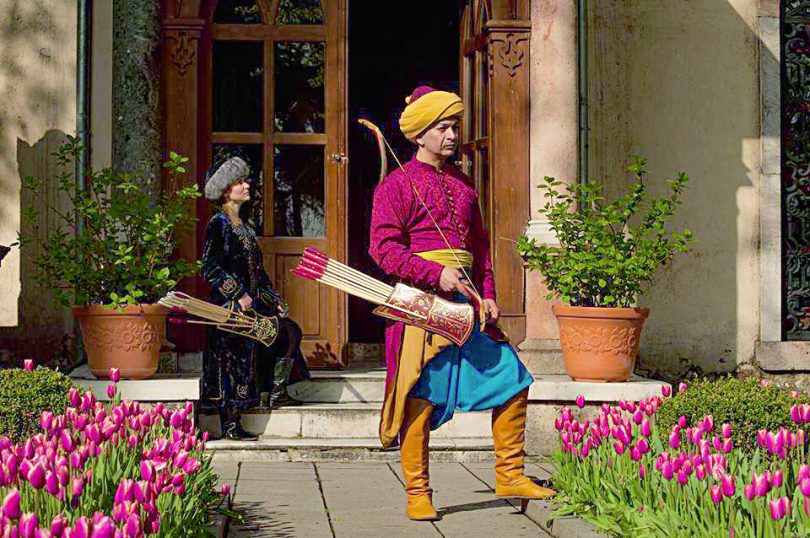 Dating back to ancient times, archery is of major significance for Turks in terms of both national and spiritual values.

Bow and arrow that accompanied their owners in every aspect of life, were important instruments used for hunting and war. For this reason, it was crucial for Turks to learn how to shoot arrows at an early age.

Turks in the past attributed various meanings to bow and arrow which became the symbol of authority for rulers. For this reason, Turks would carry their bows and arrows at all times. When a ruler sent a message to another ruler, the message would be wrapped around an arrow. There were stamps on arrows to indicate who the arrow belonged to.

In the Turkish epic Oghuz Kagan, it is told that the ancestor of Turks Oghuz Kagan had a golden bow and golden arrows. Oghuz Kagan gave his three son bows and said, “The bow is in the hands of who shoots, this is why you will remain in Central Asia, and survive the state.” He gave arrows to the his other three sons and said, “You will be like arrows, you will be rangers, and spread to the world.” This is why Boz Oklar (Gray Arrows) that received the bow, represent East and centre, while the Üç Oklar (Three Arrows) represent West and rangers.

In Oghuz clans, there was a hierarchical structure between the arrow and state order. Bow represents the centre hence it is more important. It symbolizes the shooter position. Arrow represents frontiersmen and raiders who get shot at. In military order, Boz Oklar with the bow would line up on the right-hand side while Üç Oklar with arrow would line up on the left-hand side, and right was more important than left. We can say that Turks’ ruling approach shaped with bow and arrow. Khan sending arrows to governors under his rule as a reminder of his authority, can be an example to that.

Arrow is also evocative of friendship and trust. It is known that for this reason, Turks would give arrows as gifts. Whoever received the gift trusted the sender and it is a symbol of friendship. Bow and arrow are symbols of friendship also in Chinese and Byzantine sources.

Bow and arrow can also be observed in Seljuk and Ottoman sultans’ signatures. Signatures featuring bow and arrow is significant because they were personal marks of a Sultan. Based on this, we can also say that the symbolic values shaped around bow and arrow dating back to ancient times, have been survived.

Turks were very skilled in bow and arrow making. Turkish bows resemble a tulip when pulled. Archer ring called “zikhir” is put on the thumb of the hand that pulls the bow. This is a key feature that distinguishes Turkish archery from the others. Turkish bow and arrows have authentic forms as well. We must remember that Turkish archery that has a traditional structure, is a cultural asset that has survived for thousands of years. Turkish bow and arrows are very distinct and durable compared to their counterparts with regard to both building methods and shooting techniques.

Mounted Archery Led by Turkish Nation, Spread to the World

A Turkish cultural heritage, mounted archery emerged with Proto Turkish clans such as Scythians, Avars, Huns and attained its most sophisticated form in the Ottoman period. This practice abandoned in the last two centuries, started to develop as a sports discipline once again in the world and Turkey from early 21st century. Mounted Archery was led by the Turks and spread to the world, and it is pleasing to see that today Turkey still has an important place in this discipline. Mounted archery is a highly aesthetic, elite, exciting sport and also has the mission of surviving and promoting a well-established culture with its attire, equipment and rituals. Ankara Mounted Archery Youth and Sports Club Association was founded in 2012 to survive this culture and pass it down to younger generations. It is our duty of loyalty to our ancestors to bring Turkish archery and martial arts to the place they deserve in the world.

The most popular sports were marksmanship and arrow shooting matches, and squares for Turkish people.  There were around 36 arrow shooting ranges across the Ottoman lands but the most famous was undoubtedly Okmeydanı in Istanbul. After the conquest, archery was institutionalized, and Okmeydanı became famous with arrow shooting games. In these games held by permission that were rarely obtained with difficulty, the best archers of the Empire would compete and become legends. Nearly 300 records in 50 registered ranges, can be found in registry books. But more valuable proofs are milestones erected at the points where arrows fell which face the direction the arrow was shot from. More than 30 of these milestones still stand today, and they are also works of art that provide information such as the name of the shooter, name of bow and arrow maker, weather, the date and distance of the shot. Today there are efforts to revive arrow shooting games, and these monumental proofs inherited from our ancestors must be restored as their original place and direction preserved.

Turkish Bow and Arrows are Works of Genius

Turks who were competent in bow and arrow making, combined many mixed and composite materials to make bows. Composite bows enhance shooting and this way arrows travel further. Turkish bows are a combination maple wood, horn, tendom and isinglass. Because Turks travelled on horseback, they preferred to build shorter bows for stronger shots. At the same time, Turks had such good command of bow and arrow that they could shoot 360 degrees with both hands. Turkish bow and arrows with authentic forms, are works of genius. Arrows are light, short and graceful. The bottoms of arrowheads are reinforced with distance rings or strings made of brass/horn. Light and sturdy trees as pine, ash wood, hornbeam were mainly preferred for making arrows. A tail called “yelek” made of swan, kestrel, crow and

pigeon feathers were attached to the tail end of arrows for them to properly fly to their targets.

Traditional Archery Rising From Its Ashes

The inseparable parts of Turkish culture and our genetic codes are horses and arrows; such that when Western historians speak of Turks, they often prefer referring to Turks as “Archer societies”. “Traditional archery” which began to rise from its ashes nearly 10 years ago, has reached wider masses today by spreading rapidly, being embraced and loved, and has a potential for dozens of times more athletes. Archery that requires focus, concentration, and a clear mind, is practised in wide open areas or in nature, and this way, the competitions take place in a festival atmosphere. A combination of sports and historical background, archery that broadens horizons is a great occupation for modern people. When you take interest in archery, you also take interest in many other areas such as history, old weapons, costumes, accessories culture, and techniques for making these.