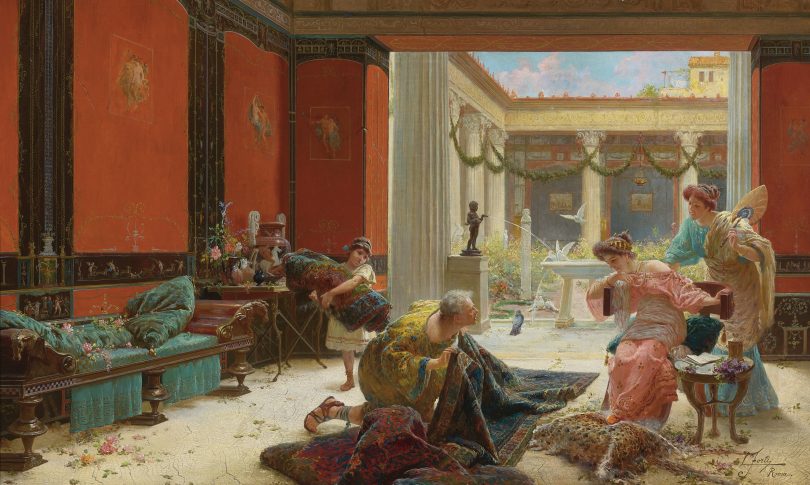 Merchants and travellers are like bees vvorking among flovvers t o make honey.

Merchants and travellers are like bees vvorking among flovvers t o make honey. People who travel, vvr/te about the places they visit, engage İn trade, buy products thousands of m ile s avvay from their home, and seli them by bringing them to cities they live in… These people are çivilization bees that travel back and forth betvveen cultures for peaceful purposes. They make honey vvhich does not just please the palate but also the hearts… Marco Polo’s famous journey resembles the labour of honey bees. At the end of his journey, the Oriental carpets vvhich reached the West w ere reinterpreted in the hands of European artist, and spectacuiar Orientai rugs deveioped in the West. The short story of Orientai beauties reaching West, wiii make this articie even more exciting. Now iet’s take a iook at carpets journey in Europe…

After Marco Polo completed his journey, Turkish carpet was met with interest in the West, and became a symbol of wealth and splendour. European artists depicted these carpets which are fabrics transformed into art works through colour and labour.

BETWEEN EAST AND WEST

A non-peacefui movement iaunched by the West against East, is the first ring of introduction. We are talking about the Crusades. The Crusaders, who arrived in the Holy Land, plundered many goods in the eastern cities they occupied, and brought these great fortunes to Europe in Venetian and Genoese galleys. The Europeans came across carpets among the spoils of war from the East. The carpets created by a combination of fabric, art of knotting, colours and labour, thrilled the Europeans. The European aristocracy who participated in the campaigns, placed the carpets at the highest point of their halls of honour in their castles, châteaus and fortified houses.

İn the following years, the carpet emerged as a commodity product, an expensive item carried from the eastern Mediterranean ports to ports in the West. Carpet was now recognized as a tangible cultural element representing Orient in Europe, and became an essential in everyday life in luxurious and splendid abodes. By 1300’s, the East was moving towards West with a desire for conquest and occupation. In 1453, when Constantinople was conquered by the mighty Ottoman Sultan Mehmed II, a new period began for relations between the West and East. By adding the title “Conqueror” in front of his name, Sultan Mehmed declared himself to be the heir of Eastern and Western civilizations. European artists could now feel the Orient more and more, moreover they had the honour of personally painting the portrait of a Turkish sultan in his palace.

There is no doubt that with the conquest of Istanbul, the East approached to the West. European artists took interest in Turks and Turkey after the Renaissance, to the point of fantasy. After Bellini painted a portrait of Sultan Mehmed the Conqueror in the Turkish palace, many successive European painters inclined towards subjects unique to Eastern civilization, and thus began the actual adventure of carpet in European painting.

The carpet designs in the works of AA European artists, prove the desire the West had for beauties of the East.

The animals, plants and geometric forms on Turkish carpets captivated European artists. Turkish carpets, which became symbols of wealth and splendour, were painted in Europe for centuries. Artists from Florence featured dragon and phoenix figures in the carpet motifs in their works before the 15th century. In a painting by Bartolomeo degli Erri dated 1470, these figures can be observed on a small carpet hanging from the window. However,

In addition to being a tangible cultural asset of Eastern civilization, Turkish carpet also has artistic elements.

European painters started to inciude Turkish carpet figures in their works towards the end of the 15th century.

Many Turkish carpets, initiaiiy seen in the paintings by Itaiian artists starting from 1451 and iater iiiustrated in the paintings of Dutch and German artists untii the iate 16th century, were named after the artists who painted them. The carpets in artists’ works, were referred to with the name of the artist who made the painting. As a resuit, the carpets caiied “Hoibein carpets” emerged in carpet trade in Europe. However, Hoibein was a painter who painted originai Turkish carpet motifs in his works. Anatoiian carpet motifs attracted the attention of European painters. Famous Uşak carpets with white backgrounds, can be seen in the works by Itaiian and French artists. The motifs of Uşak carpets are depicted in a painting by Alessandro Varotari dated 1625 which is exhibited in the Hermitage Museum in St. Petersburg city of Russia. İn addition, the motifs of Uşak carpets are also seen in a painting by Johannes Vermeer, dated between 1662 and 1664. The carpet depicted on the table in Vermeers painting, is a sign that the Europeans respected carpets.

İn another painting by Rembrandt van Rijn, the carpet is again depicted on the table. İn the painting titled Syndics of the Drapers Guild, the European carpet experts meticulously examine a Turkish carpet on the table, and try to discover its specifics. Hans Holbein’s painting The Ambassadors dated 1553, reflects the interest shown in not only carpets but also other Oriental objects. The astrolabe and oud in the painting reveal the interest taken in the East in Holbein’s imagination.