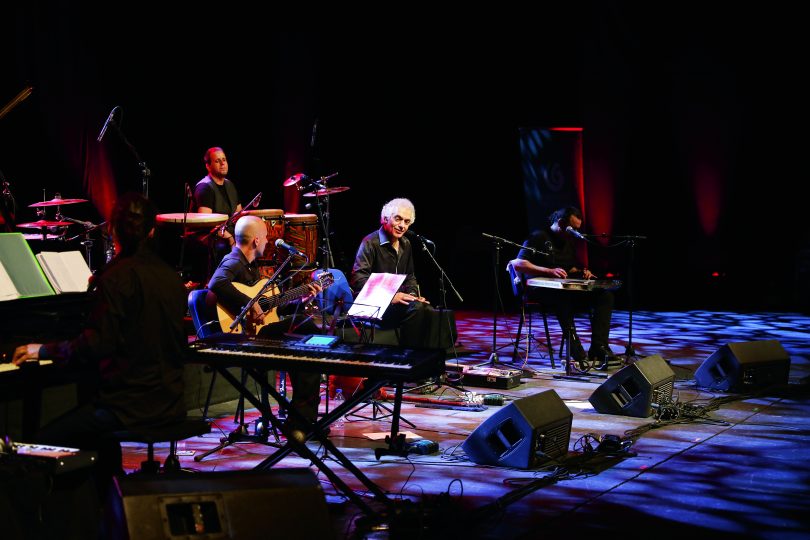 “We are not different from each other. Music is our shared language and shared love. We all can experience this language in fraternity, and unite with the whole world. This is not difficult at all!”

We held a pleasant interview with musician Ömer Faruk Tekbilek in Skopje who says “We are not different from each other. Music is our shared language and shared love. We all can experience this language in fraternity, and unite with the whole world. This is not difficult at all!”

Anatolia, home to numerous civilizations, has rarely raised artists with international renown despite its unique heritage. Ömer Faruk Tekbilek is one of those rare artists. Ömer Faruk Tekbilek who met with the Mevlevi sheikhs, dervishes, mysticism and Sufi music at a young age; has worked with great teachers, artists and producers; starred in major productions; and mastered dozens of instruments, says “Sufism and music are intertwined. Making music is like praying.” Richness of sounds originate from Mevlevi dervishes who are different from the art world with regard to their view of the world, their interpretation of music, and in combining sounds of various cultures.

We made intense efforts for Tekbilek to perform in one of more than 1200 events we carried out within the last year. In June, he performed in Skopje Yunus Emre Enstitüsü which turned out fine. We were in Macedonia for the opening of Skopje Summer Festival that lasted for 40 days and 40 nights as .tr magazine. Ömer Faruk Tekbilek concert taking place in the opening of a major cultural and artistic event in the Balkans, Skopje Summer Festival, made the performance more noteworthy. Although he was tired from rehearsals and was going to perform the following day, reed flute virtuoso Tekbilek did not turn down our request (with Ahmet Can and Ali Osman Aydın from Akit newspaper) to hold a “short interview” with him, and we still cherish the three-hour-long interview, and the conversation we had about mysticism and music that lasted until the morning prayer. We came to understand why Ömer Faruk Tekbilek, who released 15 albums that broke sales records, says “making music is like praying!” when we witnessed his state while playing the reed flute.

How did you meet with Yunus Emre Enstitüsü?

Yunus Emre Enstitüsü in Germany was the first to send me an invitation to perform 4-5 years ago but unfortunately I was too busy. Skopje Yunus Emre Enstitüsü also invited me three years in a row but again I was busy with our projects in USA so I could not accept that. I was both honoured that they insisted for me to perform however I was also a little embarrassed because I could not give a positive reply. My manager told me about the festival in Skopje and when he said that Skopje YEE invited me once again, I said “this is it”. We put down all our projects, and after speaking with Skopje Yunus Emre Enstitüsü Director Fuat Korkmaz and Muhsin, we went to Skopje.

Everything was great, I was so pleased. I felt at home. To introduce our culture to people and to share it, is undoubtedly a blessing for us as people born in these lands. We hear of and know about your activities; as far as I know, Yunus Emre Enstitüsü carries out this beautiful, blessed mission with its centres located in nearly 50-60 countries of the world, introducing Turkish language, culture, art, and promoting our country and people. I wish them continued success. Our job is similar to that of Yunus Emre Enstitüsü. God bless us all. May God make your successes everlasting. We make efforts, and God favours them. And God knows the best.

How was the atmosphere? Skopje, concert, the hall?

It was so beautiful. Allahu Akbar. It was great. I burst into tears. Thank God for tears of happiness. Very nice. Veysel Baba says “There is no you or me, only God who forgives!” The God reflects its beauty on the people, making them a mirror of himself.

What did you feel when you made the first sound with reed flute?

I tried for two months but by myself. What I experienced when I first made a sound was a teardrop from my eye. Now, for example, I try to play the Japanese instrument called “shakuhachi”. Its blowing technique is different, we blow from the side to make sounds. The other day, I was practising at home, and when suddenly a sound came out, I got goosebumps. It feels like the circle is complete and it is dissolved in the body. It feels like melting and then something fills you up.

What was the first instrument you played?

My older brother used to play baglama. There was always a baglama at home. That is why I started with baglama. Then I continued with a dumb end-blown flute. I was cutting off the head of the flute, making it dumb to make a sound. After that, I started playing the reed flute. Because reed flute is easier than end-blown flute. Reed flute is monotonic like clarion. There are no variations. However there are variations in reed flute. It is easier to play modes as a result.

I was quite advanced with oud. One day we were making music with friends. I looked at my hands and saw that it was not me playing but my hands. My fingers were moving around. After a while you realize that you do not actually play the instrument. Your hands play on their own.

Is this stupor in Sufism?

Yes. It tells you to get out of the way. We think that we do it. That is when the ego disappears. The awareness of what we call “self” fades. I did not know the melody while I was playing reed flute, but I play. In fact, the reed flute plays. So you let yourself go. That ability to let go that can be improved, resembles the state of stupor.

It is said that particularly reed flute is more otherworldly compared to other instruments.

Of course. Firstly because it concerns breathing. We use our breath. Secondly reed flute demonstrates well that the breath springs from the depth of the soul. Reed-flute making is likened to “burning with divine love.”

We know you faced difficulties in the past. Would you like to give advice to young people based on your life story?

“What is the goal of a football match?” Of course scoring. Once you aim the goalpost, you must forget about it. The aim is not to score a goal! The aim is to enjoy playing with the ball or simply playing, and to improve your football skills; score will naturally follow. Sometimes people come and ask me “Professor, how long will it take for me to play the reed flute? When will I be able to improvize?” This means “When will I score a goal?” However one must first blow the reed flute. And one must enjoy.

You praying in-between songs you performed in the concerts in the past years, were criticized by a group. You have never responded!

That is what they said to me. Because after I finish the hymns, I get exuberant, I can not control myself. I say “Thank Mighty God!” after I finish. They even warned me, “There are a lot of prejudiced people here, they might misunderstand.” I did not pray for once, then I felt my heart trembling. Then I said, “Why should I care? Whatever they say, my intention is what matters.” People’s judgements do not concern me. It is my sincerity that concerns me.

What was the first sound that affected you?

We used to visit a vineyard house. Think of a massive piece of zinc! Also different sounds come from all over zinc. It had already begun before that, at home. My mother would place a container underneath the gutter when she turned on the washing machine. I would lean on the window over there, I felt like listening to a symphony. I greatly enjoyed that.

So the rain felt like a song to you, that was how you were feeling?

You do not feel it, you hear it. Strange melodies emerge. If you listen carefully, when you turn on the tap, each falling drop has a distinct tone. There are symphonies everywhere, in everything… Focus is required. Because there is something called rhythm of silence. Why do not we hear it? Because our mind is constantly thinking.

Do you think that the rhythm of silence has a song?

Of course! That silence already inspires me.

Many artists in the world say that they hear these sounds, that these come to their ears.

A distinguished professor and a friend, Bryan I made an album with, said, “Composing is being able to listen. We have to be silent in order to listen.” When we first met he said, “Play.” I played. He was all ears. We need to empty the mind in order to hear. I observed this in him. It is all about that. Emptying the mind.