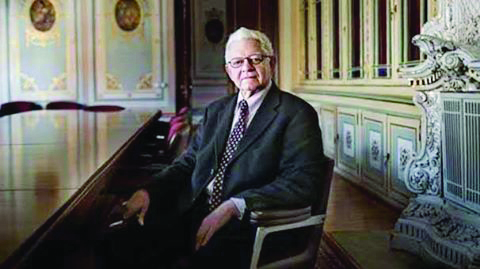 Prof. Dr. Oktay Sinanoğlu dedicated to science and development of Turkish, has carried out studies significant for history of world science.

Known as the “Turkish Einstein”, Prof. Dr. Oktay Sinanoğlu was born in Bari, Italy in 1935.

After graduating from the Turkish Education Foundation Yenişehir High School as a valedictorian, the institute sent him to USA to study on a scholarship. He studied chemical engineering at the University of California, and graduated with highest honours. After graduating from Massachusetts Institute of Technology again ranking first, he received high chemical engineer title. While studying for his doctorate in physical chemistry at the University of California, he also conducted research at the U.S. Atomic Energy Commission.

At the age of 20, he started to teach at Harvard and Yale universities. He received professor title at the age of 26 as well as the title of “the youngest professor in the world”. While he was teaching at Yale, he conducted studies in areas such as “Many-Electron Theory of Atoms and Molecules “, “Solvophobic Theory”, “Network Theory”, “Micro-thermodynamics” and “Valency Interaction Formula Theory”. He presented a research system dubbed “Sinanoğlu Made Simple” based on mathematical theories. He theorised creation of unknown living things through solving DNA codes. Throughout his life of science, he made major contributions to the world science literature by developing hundreds of theorems in the fields of quantum physics and chemistry, molecular biology and mathematics.

Sinanoğlu, who has been nominated twice for the Nobel Prize, also received many awards in his field. He was deemed worthy of dozens of awards including The Alexander Von Humboldt Science Prize, one of the most important awards of Germany, Japan’s International Sekin Science Award and the TUBITAK Science Award. Sinanoğlu is also the only person with the title of Professor of the Republic of Turkey.

Sinanoğlu who devoted his life to science and made considerable efforts for development of theoretical chemistry in Turkey, was at the same time dedicated to making Turkish awareness widespread. He carried out significant studies for development of Turkish language. In this connection, he wrote the books Bye Bye Turkish and If Turkish Falls, so will Turkey in addition to academic articles and books published. A number of books were written on Sinanoğlu, who passed away in Florida State, USA in 2015.