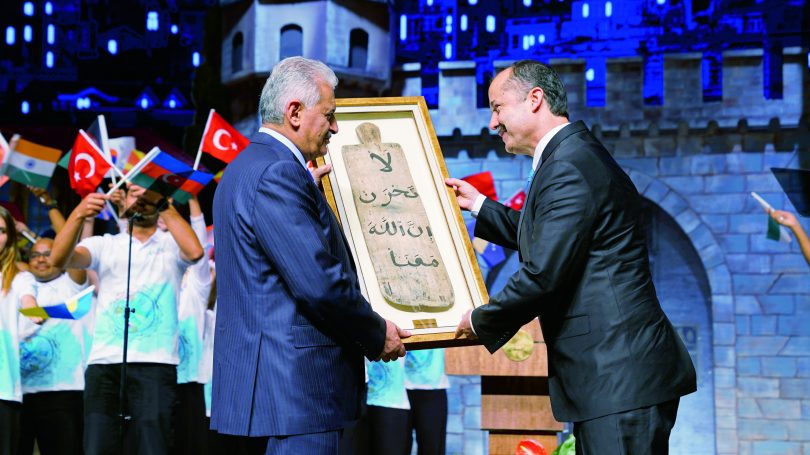 Yunus Emre Enstitüsü that introduces Turkish to tens of thousands of people every year in five continents of the world under the auspices of Turkish presidency, hosted students from 57 world countries in 22 cities of Turkey within the scope of “Turkish Summer School” program organized for the 8th time this year.

THANK YOU MESSAGE FROM PRESIDENT ERDOĞAN

President Recep Tayyip Erdoğan, who was expected to attend the program but could not due to changes in his schedule, stated the following in the message he sent for the program: “I wish the Turkish Summer School program, organized by Yunus Emre Enstitüsü for the 8th time this year, to be beneficial. I hope that the students who have been in Turkey for nearly a month will leave our country with beautiful memories. I regard everyone who participated in the program as a voluntary envoy of our country and nation. Language, especially foreign language, requires care and labour. Learning the language is as difficult as preserving it. Our students need to use what they have learnt here and improve their Turkish skills. I congratulate the esteemed president and staff of the Enstitü for making such a contribution, and I offer my gratitude to everyone involved.”

Prime Minister Binali Yıldırım stated that they established Yunus Emre Enstitü to carry out operations to promote Turkish culture, language and art to the world, and said that Yunus Emre Enstitüsü carries out operations in 60 countries at 5 continents, provides 10 thousand students with Turkish instruction and also reaches 20 thousand students through distance learning method. Pointing out that today diplomacy is not a task conducted solely through official contacts between countries, Yıldırım stated that the young people now have a big share in diplomacy. Yıldırım marked that the young people will become voluntary envoys of Turkey in their home countries and explained that throughout the program, the young students visited many cities in eastern and western Turkey, meeting people and visiting natural beauties.

Following the speech of Prime Minister Yıldırım, Yunus Emre Enstitüsü President Prof. Dr. Şeref Ateş was presented by the Somalian students with “loh”, a writing board students use instead of notebooks due to poverty, which features the quote “Do not be sad for Allah is with us” from the 40th verse of the Tevbe Surah.

MINISTER KURTULMUŞ: “YOU LEARNED A LANGUAGE OF HEART”

Minister of Culture and Tourism Numan Kurtulmuş thanked the young people who participated in the program expressing that Yunus Emre Enstitüsü has carried out very important operations for Turkish language to become widespread since its establishment. Kurtulmuş said that the letter written by Palestinian Mohammed Natse touched him deeply, and spoke as follows: “You have travelled in Turkey for a month and have learned Turkish as a language of heart. We would like to thank both you and Yunus Emre Enstitüsü. We see each of you as young people who will be accomplish great things in 20 years. I will keep the letter  my brother Muhammad sent to me, until the end of my life. A large part of Muhammad’s dreams are also the wishes of 80 million people who live in this country. We all dream about Palestine and Middle East living in peace as in the past.”

PROF. ATEŞ: “THERE IS ROOM FOR EVERY NATION IN THE SHADE OF THIS TREE”

Yunus Emre Enstitüsü President Prof. Dr. Şeref Ateş marked that as Yunus Emre Enstitüsü they offer services at a total of 135 points in 60 countries, and continued his speech as follows: “The common point which has brought us together with hundreds of young people who came to Turkey to participate in this program, is our language Turkish. We see Turkish as a tree with fixed deep roots, and with branches reaching to the sky. There is room for every nation in the shade of this tree. We are the heirs of a civilization which regards the differences on the world as wealth. In our opinion, different cultures, different civilizations are means of getting together, meeting, and bonding.

“Yunus Emre Enstitüsü, conjured in 2009 and has reached 60 countries with centres and liaison offices on 5 continents of the world, makes the deep-rooted voice of ancient Anatolian cultures heard around the world. But we are not satisfied with that, and we will not be. We will make Yunus Emre Enstitüsü a global brand with your support and patronage. Today, the young people have shared with and entrusted their dreams to us. With this responsibility in mind, we will work diligently for a future in which the reality will go beyond our dreams.”

The program started after the screening of Yunus Emre Enstitüsü and Turkish Summer School promotional film, and students from Azerbaijan, Albania and Palestine read their letters with the theme “Letters to Future 2017” explaining how they imagined the world of 20 years later. The letter Palestinian Muhammad Natha wrote about his dreams concerning the future, moved the audience. Ema Pavlakyte from Lithuania, who took the stage with Yavuz Bingöl in the program where local folk dances where performed, sang the folk song “Burası Muş’tur”. Later, Yavuz Bingöl made a solo performance with his baglama, performing the folk songs Sarı Gelin, Kara Tren, Yaylalar and Turnam. Many students in the hall accompanied the songs.